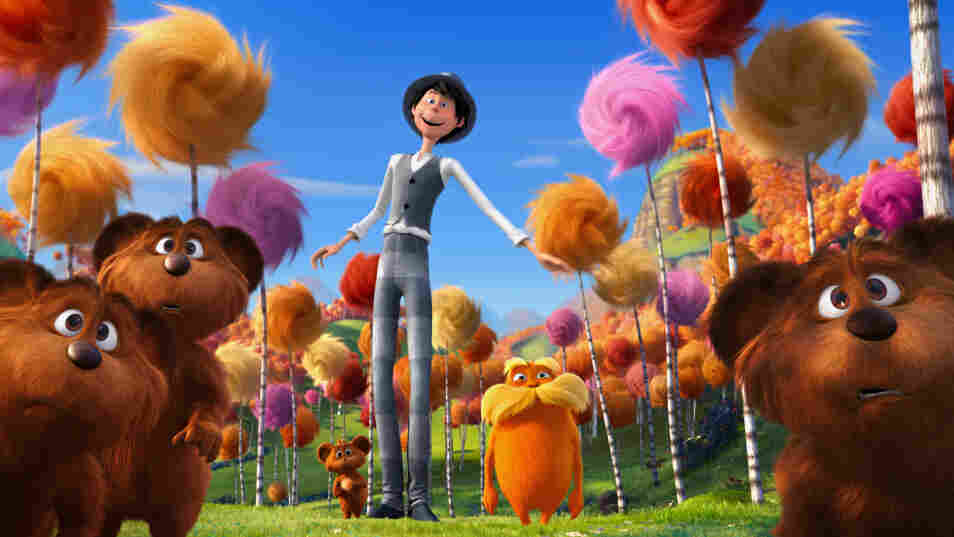 The Once-ler (voiced by Ed Helms) and the Lorax (Danny DeVito) are surrounded by bar-ba-loots in Truffula Valley in Dr. Seuss' The Lorax. Universal Pictures hide caption

From 'Dr. Seuss' The Lorax' - 'The Truffula Forest'

At the far end of town
Where the Grickle-grass grows
And the wind smells slow-and-sour when it blows
And no birds ever sing excepting old crows ...
Is the Street of the Lifted Lorax.

It's such a joy to read Dr. Seuss aloud, with those serpentine, nonsense words flying out of your mouth as if on their own current. It's a shame there's no narration in the animated feature, Dr. Seuss' The Lorax, and little in the way of verse. Early on, a character not in the book, Audrey, voiced by Taylor Swift, tells lovelorn 12-year-old Ted, voiced by Zac Efron, that once, nearby their now paved-over town, there were truffula trees: "The touch of their tufts was much softer than silk, and they had the sweet smell of fresh butterfly milk" — and Ted says, "Wow, what does that even mean?" and Audrey says, "I know, right?" So one of the only lines that is from the book, that does have Dr. Seuss' sublime whimsy, is basically made fun of, or at least dragged down to Earth.

The directors and writers made the delightful Despicable Me, and some of them made the last and much better Seuss feature, Horton Hears a Who, but this time they don't seem to trust their material. And maybe they have reason. The book The Lorax tells the story, in flashback, of a young, energetic entrepreneur known as the Once-ler who grows rich by indiscriminately hacking down truffula trees and inadvertently wipes out an entire ecosystem. It's an environmentalist classic, a walloping argument against unchecked growth. But it's nowhere near Seuss' top tier: It doesn't have that thrilling mixture of anarchism and elegance.

It's pure agitprop, with no surprises and a title character — a mysterious creature who "speaks for the trees" — that even Theodore Geisel seems to find a pain, describing him as "shortish. And oldish. And brownish. And mossy," who speaks "with a voice that [is] sharpish and bossy." Fortunately, the Lorax doesn't appear in the book very much and you don't actually have to hear his voice. As opposed to the movie, with its long and loud serenades in the unmellifluous New Jersey tones of Danny DeVito. 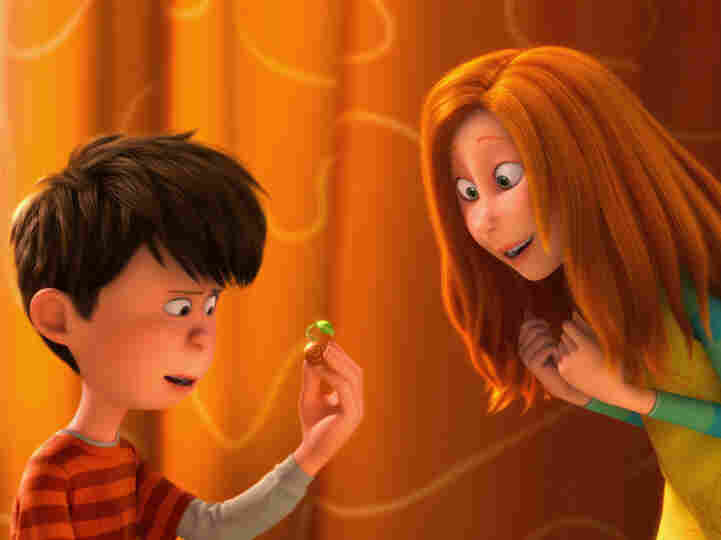 Ted (voiced by Zac Efron) tries to impress Audrey (Taylor Swift) by running into the wasteland to talk to the Once-ler. Universal Pictures hide caption

I don't blame DeVito: It's not as if he was hired for his subtlety. He's a good, pushy sitcom actor with expert timing. But given nonstop, crass one-liners, he comes to embody the spirit of the movie in ways I don't think the filmmakers intended.

The movie is broad and raucous and rather campy, and the songs, among them an ironic celebration of capitalism, barely pass muster. There are too many whack-a-mole sight gags featuring adorable bar-ba-loots (bears to you) and three warbling fish. The screenwriters add a stock villain to the framing story, a pint-sized mogul who pollutes by design, since unbreathable air drives up sales of his canned air. He and his goons chase after 12-year-old Ted when the boy ventures into the denuded wasteland to talk to the aged, reclusive Once-ler — not because the kid cares about the environment but to impress the teenage Audrey. I guess that makes him easier to relate to than if he were just, you know, curious about why there are no animals and the landscape looks like the moon.

Don't worry, this one isn't as eyeball-searing as the live-action The Cat in the Hat. The diaphanous texture of the truffula blooms is lovely, and the movie gets more compelling in the last 20 minutes, when the cute animals — not to mention the Lorax — take a hike. For a brief spell, it has the book's sense of loss, its droopy melancholy. You can still discern the stark parable beneath the movie's jokey, facetious tone, but this kind of studio 3-D feature animation is all wrong for the material. The Lorax speaks for the trees, but I must speak for The Lorax.