Accessibility links
Samaris: The Sound Of Young Iceland "Viltu Vitrast" is an alluring bit of Icelandic pop from a band whose oldest member is still 18.

Samaris: The Sound Of Young Iceland 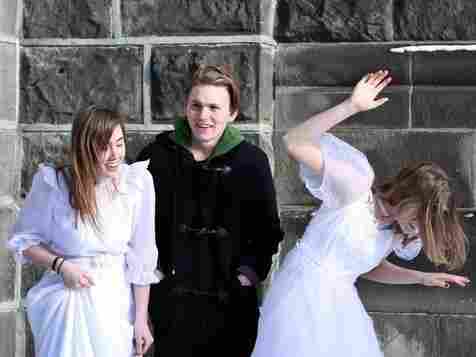 "Viltu Vitrast" is an alluring bit of Icelandic pop from a band whose oldest member is still 18. Courtesy of the artist hide caption

"Viltu Vitrast" is a minimalist, clarinet-driven bit of Scandinavian electronic music, performed by three teenagers who are each roughly the same age as Justin Bieber. In the song, Samaris retells a religious Icelandic folk tale about people who need help from a celestial being, but worry it will choose not to manifest its power on Earth. Jófríður Ákadóttir's confident Icelandic-language singing, combined with pretty clarinet melodies and dreamy trip-hop beats, makes it easy to imagine gliding around with the celestial being as it considers the people's request.

Samaris' oldest member is 18, but it sounds like they've all been making music for as long as regional influences such as Mum, Bjork and The Knife. It helps that they earned 20 hours in a professional studio to master their Hljóma Þú EP after winning "Iceland Music Experiments," a serious battle of the bands, as well as that Ákadóttir has experience playing with another group, Pascal Pinon. But it's mostly because these guys have serious talent and vision.

Samaris knows English as well as any Scandinavian band, but it chooses a bolder path by fully embracing its own language and culture. Samaris has only released a short three-song EP, but it's already a top-seller in Icelandic music stores, and is set to play a number of Icelandic music festivals. Expect more from Samaris in a few years, as its members graduate college and focus fully on their musical destinies.