Accessibility links
The Lorax Speaks For The SUVs The Lorax is a tale of saving the trees — which makes it a little surprising that one of the merchandising tie-ins for the new film is with Mazda SUVs.

The Lorax Speaks For The SUVs

The Lorax Speaks For The SUVs 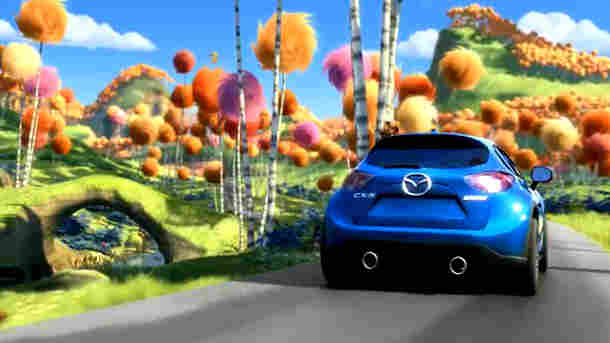 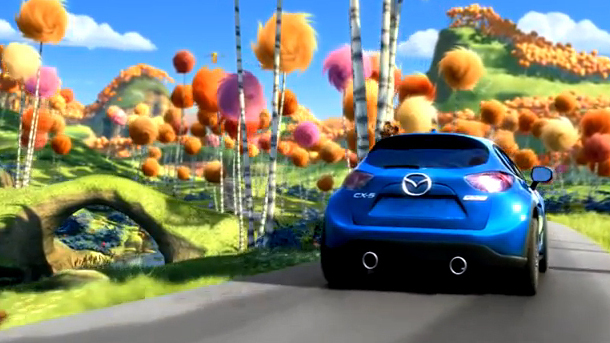 The scene is part of a musical number sung by the Once-ler (voiced by Ed Helms), who has begun chopping down Truffula Trees en masse in order to grow his industrial-sized Thneed operation. (A Thneed, as the Once-ler is only too happy to explain, is "a fine thing that all people need.") The Once-ler tosses aside one of his products, which lands in the unassuming hands of the Lorax (Danny DeVito). A nearby photographer snaps his picture, and the little orange man who speaks for the trees is plastered on a billboard with the Thneed and an accompanying tagline: "Lorax-approved."

It's a bit that's gaining real-world significance, as Universal has forged nearly 70 different advertising partnerships to help promote the film, with participating organizations ranging from Whole Foods to the U.S. Environmental Protection Agency. One of those licensing agreements in particular is attracting some strongly negative feedback: the film's cross-promotion with automobile manufacturer Mazda, which launched a commercial on Feb. 21 boasting that its new CX-5 sports utility vehicle is, yep, Lorax-approved.

In fact, the commercial says, the CX-5, which is not a hybrid but gets 35 miles per gallon on the highway, is the only car to receive the "Truffula Tree Seal of Approval." Mazda calls the fuel-efficient technology SKYACTIV, and spotlights it in the ad, which depicts the car driving through the Truffula Valley as the Lorax and the woodland critters embrace its presence.

But the spot, at least so far, is not audience-approved. News outlets from The Guardian to The Atlantic are decrying the commercial as a hijacking of the Lorax's message. The official YouTube video has received 900 "dislike" votes to 108 "likes" as of Thursday. Stephen Colbert mocked it on a recent episode of The Colbert Report.

All the negative feedback did not surprise Don Romano, Mazda's chief marketing officer for North America.

"What we find is that when people actually learn more about our technology and what we're trying to do, the concerns dissipate, if not go away entirely," Romano said. "I know we're not out to please everybody. We're just out to make a positive step in the right direction."

Romano said that the ad's intention is to challenge people's perceptions of what environmentally friendly cars can be, adding that the Lorax "gave us an opportunity to tell our story." He said the commercial was a joint effort between Mazda's creative team and the filmmakers at Universal; although the content of the ad was scripted by Mazda, they solicited feedback from Universal at multiple checkpoints.

"It's our first incremental step at doing the right thing," Romano said.

Romano also disagrees with the notion that Dr. Seuss's creation would be against all cars.

"If people think that everything's going to change overnight, that's just naive. It's not going to happen that way. It's going to happen through incremental changes and constant improvement," he said. "I think Dr. Seuss would be quite proud of that progress and the fact that we're taking that step."

The commercial is currently in rotation on TV and in movie theaters, and the campaign will run for another three weeks. Mazda will also donate $25 to public school libraries through the National Education Association for every Mazda vehicle test-driven between Feb. 24 and April 2, and is currently touring schools with cars and the Lorax in tow.

Universal Studios hasn't responded to a request for comment, but it seems that for the moment, the Mazda CX-5 will remain Lorax-approved.