Accessibility links
Mexican Drug Cartel Targets Australia One of Mexico's most powerful criminal organizations has added a new market to its empire: Australia. The Sinaloa cartel is developing a booming cocaine trade in a country with an endless coastline and many harbors and ports. 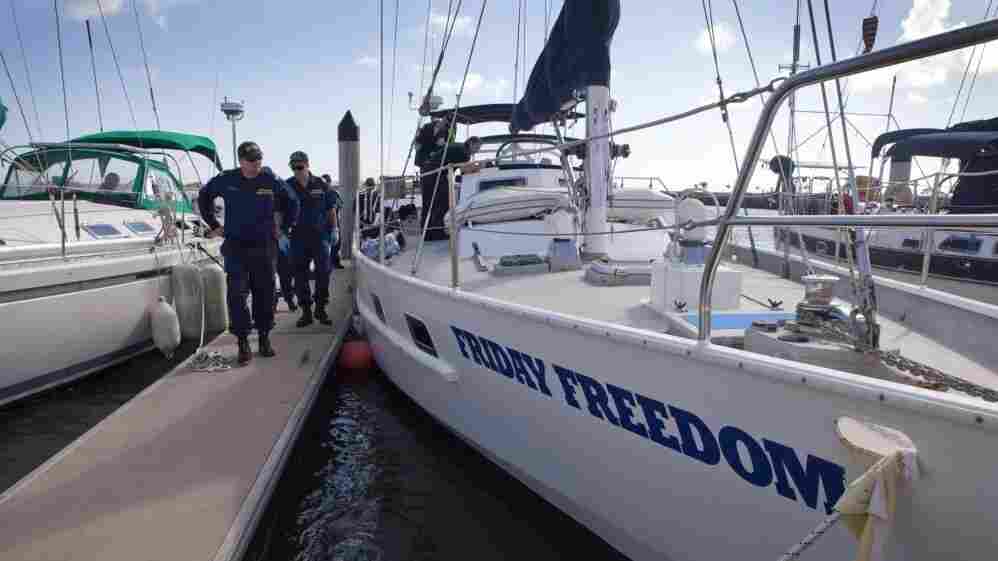 Cocaine seizures are up sharply in Australia, and Mexico's Sinaloa drug cartel is believed to be involved in large-scale smuggling. Authorities seized about 660 pounds of cocaine and more than $3.2 million from a yacht in Bundaberg, Queensland, in November 2011. Four Spanish nationals were arrested. Australian Federal Police/EPA/Landov hide caption 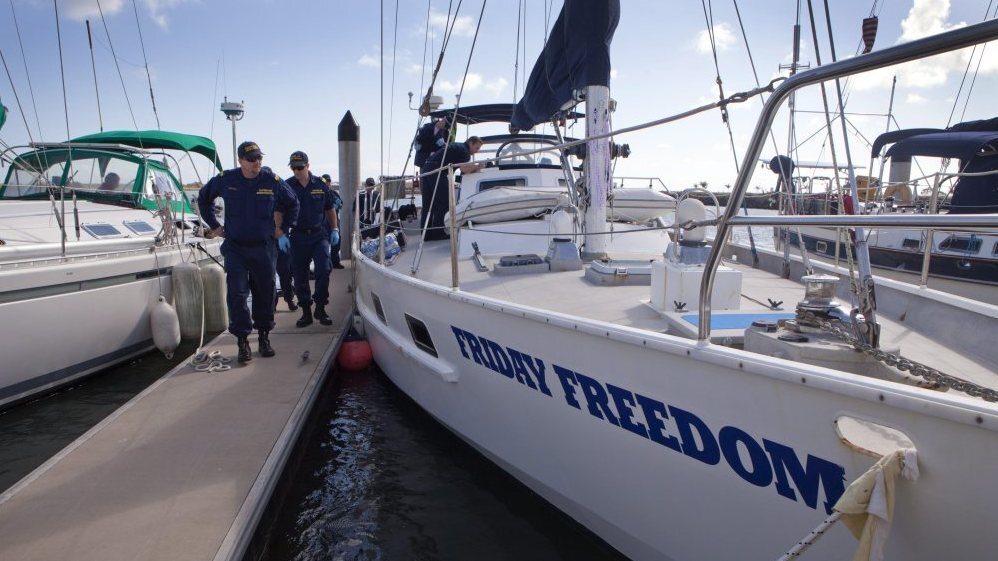 Cocaine seizures are up sharply in Australia, and Mexico's Sinaloa drug cartel is believed to be involved in large-scale smuggling. Authorities seized about 660 pounds of cocaine and more than $3.2 million from a yacht in Bundaberg, Queensland, in November 2011. Four Spanish nationals were arrested.

Australia is a huge island, with stretches of lonely, rocky coastline that extend for thousands of miles. What's more, there are lots of harbors and airports.

In short, opportunities are plentiful for an enterprising Mexican drug trafficker to move his product 8,000 miles across the Pacific Ocean to service the vibrant new market Down Under.

In recent years, Latin American drug traffickers such as Guzman have been searching for newer, untapped markets. Cocaine use in the United States is in steep decline, though it's still the world's largest marketplace for illegal drugs. Cocaine smugglers have developed a booming trade in Australia, particularly in cities like Sydney with its young, prosperous, fun-loving population.

Mexican organized crime is playing a more active role in Australia, which has a significant cocaine problem, according to John Lawler, chief executive of the Australian Crime Commission.

In the past four years, Guzman has expanded his reach throughout western Mexico and the world. He currently has operations in North America, Central America, South America, Europe, Asia, Africa — and now Australia.

The Sinaloa cartel has been able to move in a more global way faster than some of the other cartels, says Rodney Benson, chief of intelligence at the U.S. Drug Enforcement Administration.

"They've recognized a place like Australia, where the price of cocaine can yield them a much greater profit margin compared to selling a kilogram here in the United States," he says.

The markup is impressive. 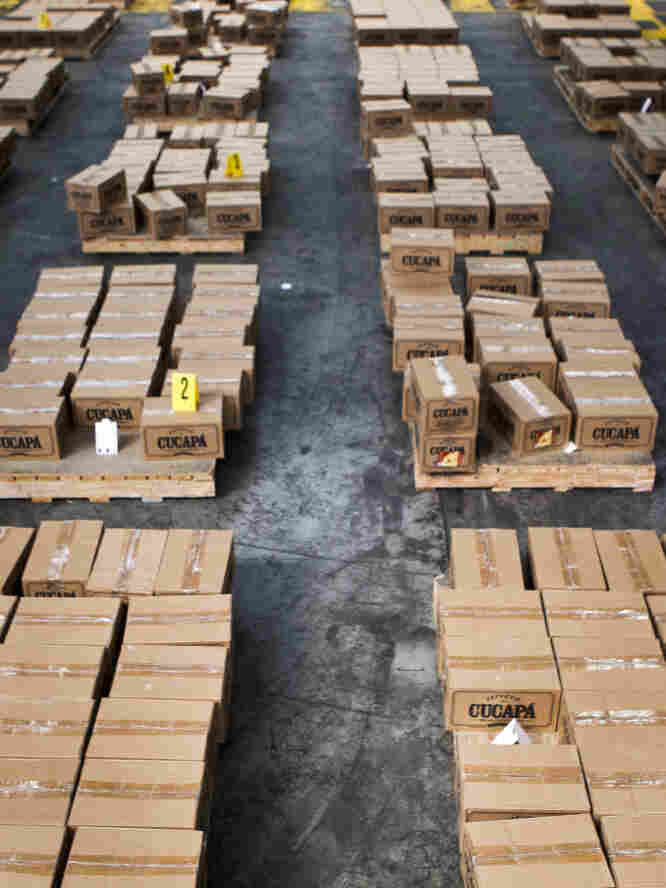 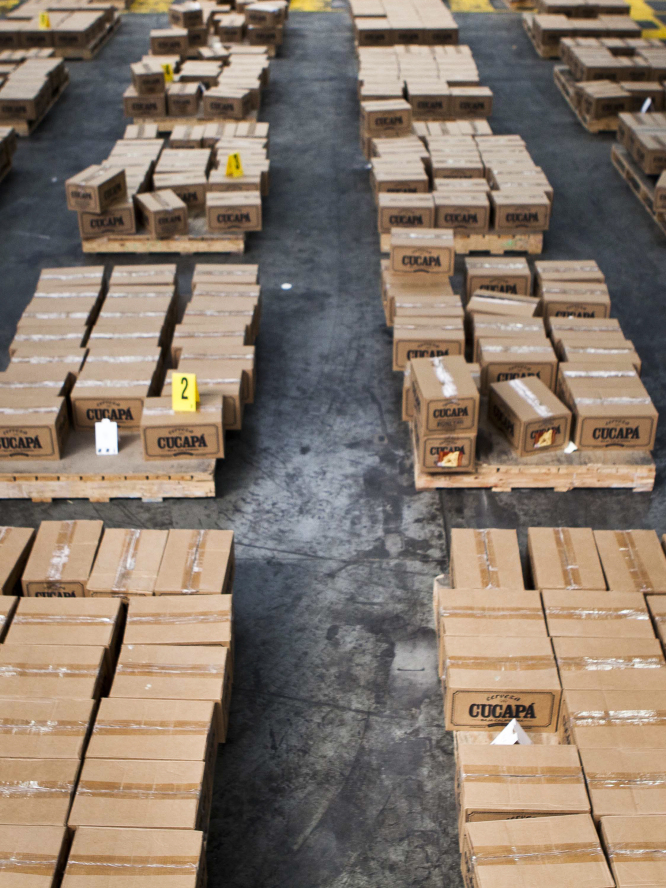 Australian authorities discovered more than 100 pounds of cocaine and methamphetamine concealed in cases of Mexican beer in a sea cargo shipment last October.

A kilo of cocaine in Brownsville, Texas, sells for $16,000. The same brick goes for up to $250,000 in Sydney. It's no wonder Latin America's cocaine cowboys want in on the action.

Many Ways To Import Cocaine

Australian authorities have ramped up border enforcement to try and control the blizzard. The Australian Federal Police reports cocaine seizures increased 103 percent in 2010-2011 compared to the previous fiscal year.

But the Sinaloans are endlessly, legendarily resourceful.

On the U.S.-Mexico border, they use tunnels, 18-wheelers and ultralight aircraft. In Australia, traffickers hide cocaine in freight as varied as paving stones and lawnmowers; it's sent through the postal system, couriers tape it to their bodies and private yachts ferry it across the Pacific.

The loads don't necessarily come directly from Mexico or South America — they are often transshipped through third countries such as Nigeria, the Netherlands, Canada or the island of Vanuatu.

"With such a very, very large coastline and with the opportunity of cartels and other organized criminals coming to Australia through multiple routes, to try and detect each and every [shipment] is an extraordinarily difficult task," Lawler says.

Once the cocaine is in Australia, local crime syndicates take over.

Federal investigators have intelligence that Sinaloa operatives have visited Australia to link up with local drug distributors, and Australian traffickers have traveled to Latin America to do the same.

"Some of our larger groups are the Hells Angels, the Rebels, the Bandidos, the Comanchero, the Nomads, the Gypsy Jokers," he says. "And certainly they're heavily involved in all sorts of organized crime but we believe cocaine is becoming a more attractive market to them."

The drug was much less common in Australia, where the country is now in the midst of what The Sydney Morning Herald called a "national cocaine binge."

I could get it here in 10 minutes if I wanted to. I couldn't get a pizza delivered in 10 minutes. That's how fast and easy it is to get it.

A young Sydneyite on the ease of obtaining cocaine

"It's seen as a very desirable drug. It's seen as a cleaner drug in some respects especially compared to amphetamines. It's in the media, it's in the news, they want to try it, they like it, and away they go," says Mark Ferry, a drug treatment counselor in Sydney.

One of Ferry's clients is Raymond, a tall, jittery, 17-year-old aboriginal boy from the Sydney suburb of Redfern. He was caught shoplifting to support his coke habit and sent to the Noffs Foundation drug treatment center.

"When I first used it, it just made me feel happy, you go longer in sex. I mean you just feel energetic when you're on it. So I just kept using and using," he says.

Cheap crack cocaine hasn't made it to Australia, as of now. The high price of powdered coke prevents more poor kids like Raymond from becoming addicts.

The typical profile of the modern Australian cocaine user is young, single, well-educated and well-paid.

Blade — the fictitious name he chose for an interview — is a fair-haired, 23-year-old club photographer who met an NPR reporter at a trendy rooftop bar in Kings Cross, where good-looking young people quaff glasses of Victoria Bitter and check their iPhones.

"I could get it here in 10 minutes if I wanted to," he says, referring to cocaine. "I couldn't get a pizza delivered in 10 minutes. That's how fast and easy it is to get it."

A shrewd merchandiser doesn't just supply a market; he creates demand for his product. And that's what's happening with cocaine in Australia.

"Cocaine is a little bit more fabulous, sorry. You've got money in Sydney, because it's so expensive that only the rich models and designers and musicians and all the cool kids do it," Blade says. "So you look cool if you do it, pretty much."

He's asked whether he ever thinks about the murder and mayhem in Latin America that is associated with the cocaine trade.

"I guess we live in this bubble and so when you go out and party the last thing you're thinking about is who you're affecting by doing something illegal, like cocaine," he says.

The bubble is unlikely to burst anytime soon. A strong Australian dollar, healthy economy and the drug's image as "a little bit fabulous" point to the expanding popularity of cocaine Down Under.