Accessibility links
New Republic: Rush Limbaugh's Morality Lesson Rush Limbaugh recently made controversial comments about a Georgetown law student who testified to congress in favor of a requirement for contraceptive coverage. Jonathan Cohn of The New Republic is disgusted by Limbaugh's comments. 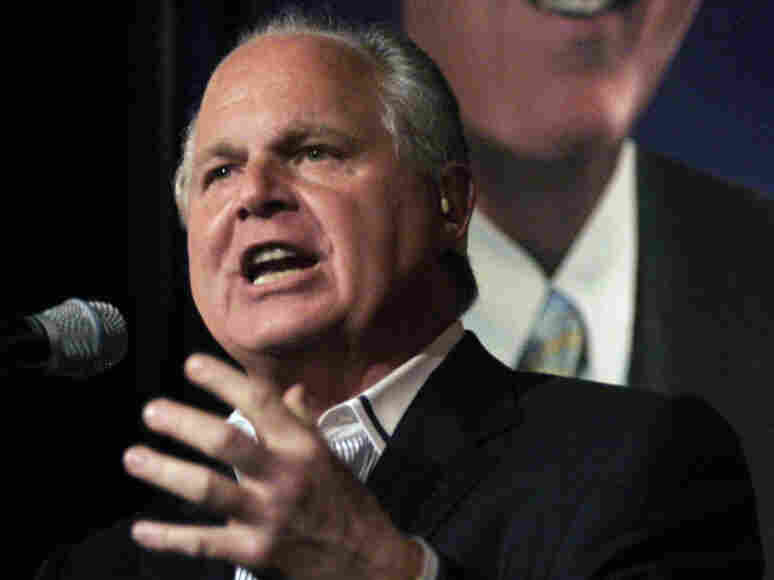 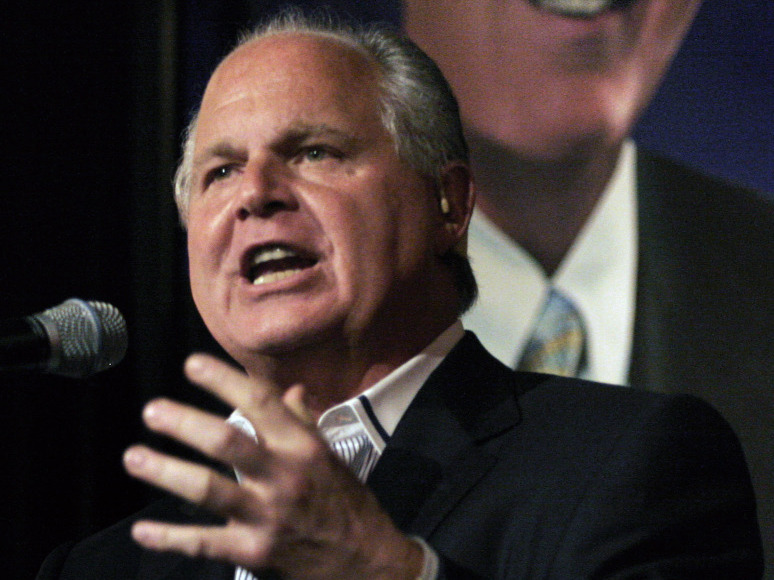 A photo of radio talk show host and conservative commentator Rush Limbaugh from May 3, 2007. Limbaugh made what many consider disparaging comments about a Georgetown law student, Sandra Fluke. Fluke testified before Congress in support requiring employers to provide contraceptive coverage.

Jonathan Cohn is a senior editor of The New Republic.

Rush Limbaugh has said many outrageous and offensive things over the years. But he may have hit a new low over the last two days.

I'm talking about a series of statements Limbaugh has made about Sandra Fluke. Fluke is the third-year Georgetown Law Student who testified before a congressional panel about the Obama Administration's controversial new health insurance regulation, the one requiring that nearly all plans cover contraception. During that session, Fluke told the story of a classmate who needed birth control medication to control ovarian cysts. According to Fluke, the classmate had difficulty convincing pharmacists that the medication was for her medical problem (which Georgetown's policy is supposed to cover) rather than to prevent pregnancy (which it's not supposed to cover). Facing $100 out-of-pocket expenses she could not afford, the classmate stopped taking the pills and developed a large, painful, and dangerous cyst. Doctors had to remove one of her ovaries, Fluke said, and now the twenty-something law student is showing signs of early menopause.

Fluke gave her testimony last week. On Wednesday, with the Senate preparing to vote on a measure that would allow employers to opt out of the new contraception requirement, Limbaugh said the following:

On Thursday, following protests from liberals, Limbaugh kept at it:

So Miss Fluke, and the rest of you Feminazis, here's the deal. If we are going to pay for your contraceptives, and thus pay for you to have sex. We want something for it. We want you post the videos online so we can all watch.

I'm not quite sure what to say to this.

Do I point out that, for many women, access to contraception has nothing to do with trying to prevent pregnancy, as was the apparent case with Fluke's classmate? That many people wishing to use contraception are married people who simply want some control over whether, and when, to have children? That the most effective forms of contraception are expensive, because they require either a medical procedure or the constant use of medication — regardless of whether you have sex once a month, once a week, or once a day? That, as a forthcoming paper from Harold Pollack and Adam Sonfield points out, studies show women will choose these forms of contraception if they are affordable? That contraception has all kinds of economic and health benefits, which is why a non-partisan commission of experts from the Institute of Medicine first recommended birth control be part of basic health insurance?

I could say any of those things. But to do so might seem to concede an argument that doesn't deserve conceding: the suggestion that women who have premarital sex are "sluts."

So let's be clear about this. Women sometimes have sex out of wedlock. That does not make them sluts. That makes them human — just like men, who also have been known to have sex out of wedlock. But when contraception is not available, women are the ones who end up bearing children and, all too often, raising them on their own. That's one reason why birth control ought to be widely available. It gives women, unmarried and married, the freedom to control their bodies and their lives — freedoms that most men take for granted.

More and more people seem to grasp this, at least intuitively. In the most recent CBS News/New York Times poll, 61 percent of Americans support making contraception coverage mandatory, even for plans that religious employers sponsor. Most Americans also seem comfortable with the idea that unmarried people are having sex. In 2003, the last year for which I found data in my hasty web search, 58 percent of Americans believed that premarital sex is morally acceptable, according to a survey from Gallup. The number will likely get higher with time, since young people approve of premarital sex by even wider margins.

Maybe Limbaugh is among those who disapprove. That's his prerogative. And if he ever wants to have a serious conversation about reducing teen promiscuity or pregnancy, I'd be among the many liberals happy to have it. But in what kind of twisted moral universe is it ok to denigrate sexually active women as sluts or prostitutes and then, in the same breath, suggest they earn the right to their birth control by performing in sex videos?