Accessibility links
Movie Review - 'Being Flynn' A fractious, self-deluding writer (Robert De Niro) reaches out to his adult son (Paul Dano) after almost two decades of estrangement. Critic Bob Mondello says the movie could have been precious in the wrong hands, but director Paul Weitz and his cast tell an emotionally real story. 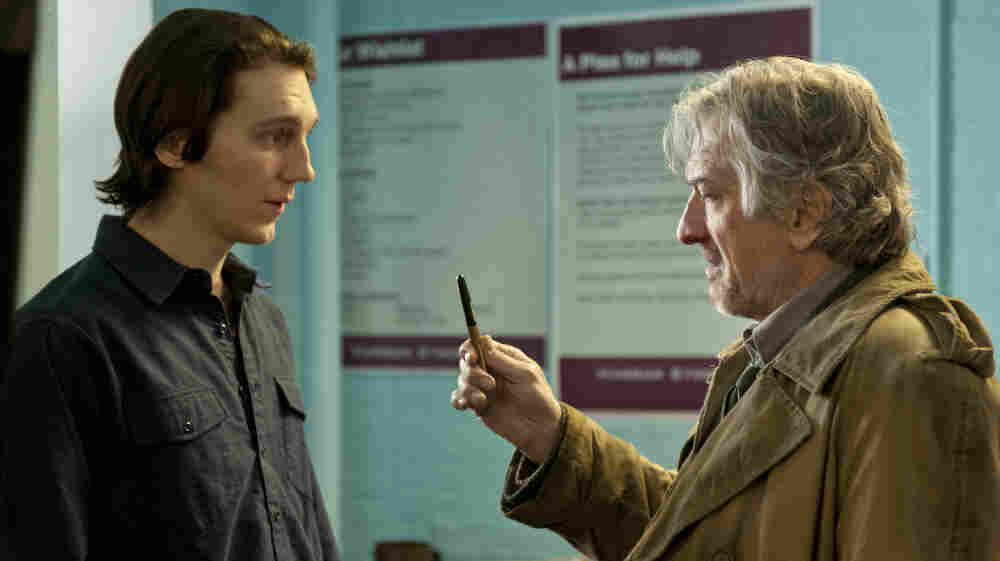 Rated R for language throughout, some sexual content, drug use, and brief nudity

From 'Being Flynn' - 'A Raconteur'

From 'Being Flynn' - 'Virtuoso Display'

Robert De Niro's last outing with director Paul Weitz was less than auspicious: The comedy Little Fockers received terrible reviews. Being Flynn, their second collaboration, is a more serious affair about the estranged relationship between a fractious father and his son.

De Niro plays Jonathan Flynn, a blowhard of a dad who spent his son Nick's childhood behind bars for bank robbery or otherwise absent. Nick grows up with a supportive, adoring mother played by Julianne Moore, but his father's letters from prison — in which he claims to be close to finishing a prize-worthy novel — still pique Nick's interest.

In the film's present, 20something Nick (Paul Dano) writes poetry and works at a homeless shelter while figuring out what to do with his life. When his father gets in touch after almost two decades, claiming an emergency, Nick visits him, where he's being thrown out of his apartment.

Although Jonathan claims to be a sought-after houseguest for being such "an excellent raconteur," his son can see he needs help. Things spiral down from there in a manner that would seem way too pat if Being Flynn weren't based on the celebrated memoir Another Bulls- - - Night in Suck City, and populated by performers whose very acting styles practically scream "dysfunction."

Dano gives Nick the watery eyes and hesitant smile of a struggling milquetoast, while De Niro plays his taxi-driving father as pure ham — alcoholic, boisterous, delusional. It's clear why Nick would be wary of this dad whose version of the past doesn't quite jibe with his own. When he describes his wife's death, for instance, Jonathan calls it a tragic accident, rather than the more decisive act she left a note for.

Writer-director Weitz finds grace notes everywhere, plunging headlong into a scarily persuasive skid row, then seeking more stable ground for his characters. His script makes much of parallels — two aspiring writers, one working in a homeless shelter, the other freshly homeless. Three family members: a mother, father and son who face their demons by respectively fighting them, embracing them and learning to live with them.

And then there's the simple fact of De Niro, playing a delusional taxi driver. It's easy to imagine Being Flynn's story turning precious in the wrong hands, but Weitz and his cast spin it just right — as a narrative that is both emotionally real, and just writerly enough to suit its leading men.