Accessibility links
Teller Talks: The Science Behind Magic Tricks On stage, Teller, half of the magician team of Penn & Teller, rarely says a word. But now he's talking, explaining how magicians harness scientific research on deception to trick audiences into falling for their illusions. Meanwhile, scientists are exploring how magicians manipulate the mind. 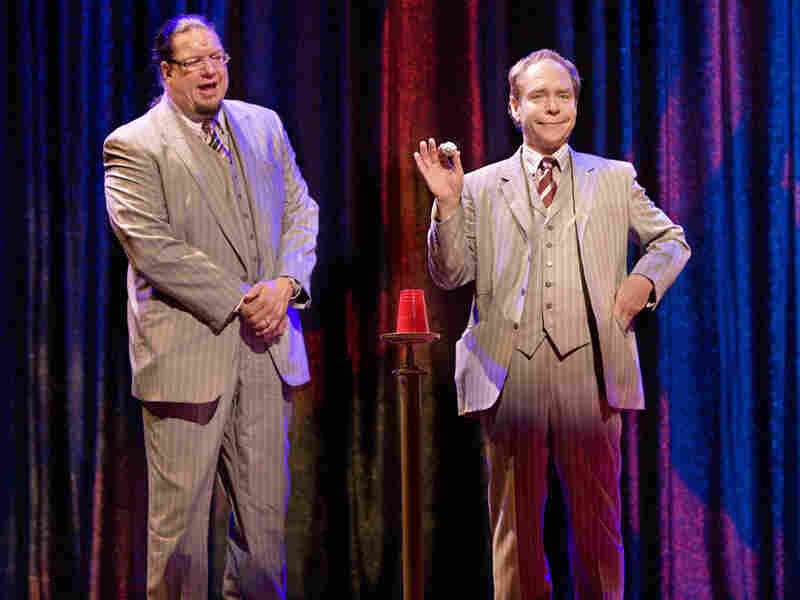 In a recent article for Smithsonian Magazine, Teller (right), half of the magic team Penn & Teller, explains the art and science of mental manipulation. Courtesy of Penn & Teller hide caption 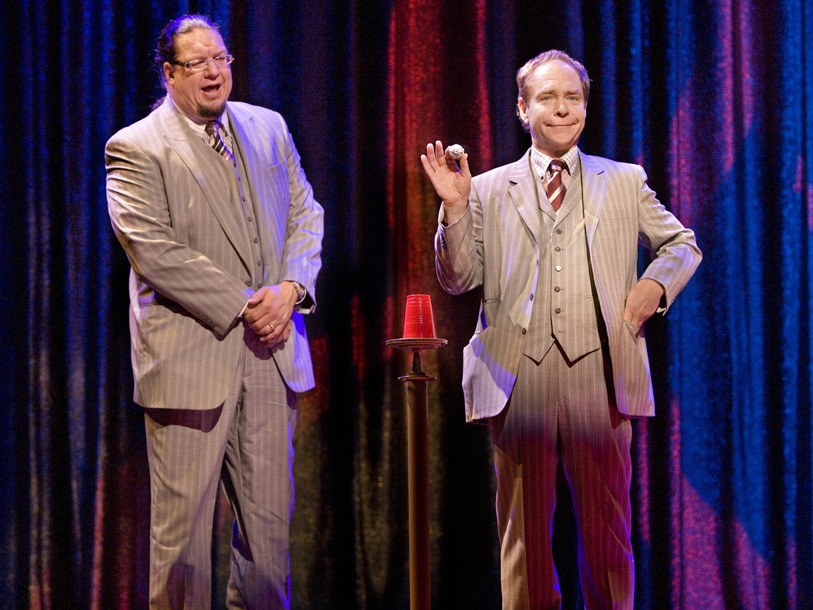 In a recent article for Smithsonian Magazine, Teller (right), half of the magic team Penn & Teller, explains the art and science of mental manipulation.

On stage, Teller, half of the magician team of Penn & Teller, rarely says a word. But now he's talking, explaining how magicians harness scientific research on deception to trick audiences into falling for their illusions. Meanwhile, brain researchers are interested to learn more about how magicians manipulate the mind.

In a piece for Smithsonian magazine, Teller writes, "At the core of every trick is a cold, cognitive experiment in perception. Does the trick fool the audience?"

If it does, it's a success, both for the magician and the scientist. But magic is about more than controlling the audience's attention. "There's a term in magic," Teller tells NPR's John Donvan, "misdirection," which laypeople turn to when they want to explain an illusion. "That's an oversimplified view. There are rare occasions in which mere distraction enables you to perform a piece of magic."

On the danger of perceiving what's real and what's not

"In real life, the most important decision you ever make is, where does reality leave off and make-believe begin? If you make a mistake about that, you're dead. You know, you're out on the street corner. You think there's no bus coming. You step out, you're dead.

"Magic gives a human being an opportunity to experience that kind of mistake and experience no harm from it. And so, in a certain way, there's a parallel between that and psychology, in that psychologists are ... studying the way people perceive and the way people experience things but in a way that's not going to end up doing them any harm."

On why magic is a nice change for psychiatrists and psychologists

"Psychologists are tired of being, you know, in labs with rats, and ... in the halls of academe, and they want something a little more romantic. And they think, oh, magic ... and they see ... Disney dust sparkling out of magic wands, and they say ... this will make psychology more interesting.

"Recently there's been a sort of a flurry of activity among neuroscientists who are those people who ... study the brain scans and all that very tiny, tiny detailed stuff [and they are] trying to hook themselves into the flash of the show business of magic. And one of the jokes that I make in this article is that those people are really taking soil samples from the ... outside of the mine that magicians have been pulling gold out over centuries. So they're focused on very, very small things."

On testing magic in the lab

"In eye tracking, they're really dealing with the most rudimentary kind of illusion perception ... [b]ecause we [now have] equipment that allows you to see exactly the focal point of the eye at any given moment, they have people watch videos of magicians, and they track the position of the people's eyes.

"... There are a couple of worthwhile things they have discovered. They have discovered, for example, that when a magician makes a straight movement from one point to another, the human eye looks at the first point and then dashes to the second point but doesn't really pay attention to the journey between those two, whereas, if the magician moves in a curved pattern, the eye follows the movement all the way. So ... that is the most profound revelation that I've heard from the people who are doing this sort of something real lab-y, techie kind of stuff."

On using laughter to help distract the audience

"A little discovery that I think maybe Penn and I made, but I'm sure magicians have discovered over the centuries, is that laughter disables your ability to think critically for at least a moment. So if I do some move that might be slightly suspect to the audience and immediately afterward there's a laugh, I can be pretty sure that they're going to forget any attention that they were going to give to that move ... even — and especially — if it comes afterward.

"... I'm making this sound like the sinister thing, you know, that we're trying to get away with [something] — well, maybe when the car salesman is telling you a joke just at the point where you were about to, you know, open the hood and look at the engine ... maybe there, it's sinister, you know? [But] in magic, you come in expecting and hoping that the person is going to amaze you and/or make you laugh."