Accessibility links
Schools Get Tough With Third-Graders: Read Or Flunk There's little dispute among educators that kids aren't reading as well as they should be. Now, a growing number of states are taking a hard-line approach, requiring that third-graders who can't read at grade level be automatically held back. But some worry that will do more harm than good. 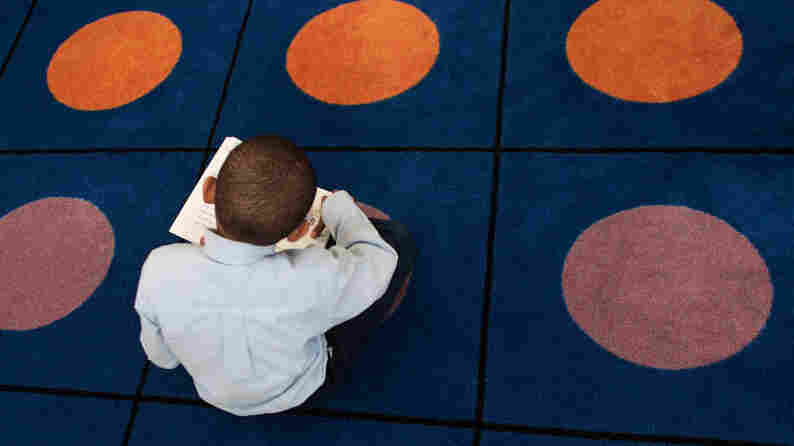 A student reads at a public elementary charter school in New York City. Educators like to say third grade is when students go from learning to read, to reading to learn. Chris Hondros/Getty Images hide caption

There's little dispute among educators that kids are not reading as well as they should be, but there's endless debate over what to do about it. Now, a growing number of states are taking a hard-line approach through mandatory retentions — meaning third-graders who can't read at grade level will automatically get held back.

To those pushing the idea, it's equal doses of tough and love: You are not doing kids any favors, they say, by waiving them on to fourth grade if they aren't up to snuff on their reading.

"It's essentially just lying to the kid to say that, 'You are there,'" says Tim Taylor, president of Colorado Succeeds, which is pushing the mandatory-retention approach in that state. "I think what we need to do is to draw a line in the sand and have the fortitude to step up and say this is the right thing for kids."

Educators like to say third grade is when kids move from learning to read, to reading to learn. So if they don't yet have basic reading skills, they need to stay back.

"It's a gift of time," Taylor says. "It is giving the kids the ability to get to the reading levels that they need so that they can be successful moving through their school career."

Similar bills are being considered in New Mexico, Iowa and Tennessee; and have recently passed in Oklahoma, Arizona and Indiana. Advocates of the bills point to Florida, where schools started mandatory retentions 10 years ago. There, reading scores for kids who repeated third grade went from way below average to well above average.

That impressed many, including Hanna Skandera, who used to work in Florida and is now education secretary in New Mexico.

But others are less impressed.

"[The students] are a year older," says David Berliner, a professor emeritus of education at Arizona State University. "Of course they're going to do better when they get into fourth grade."

Berliner says that even in Florida, those gains faded by eighth grade. In the long term, he says, holding kids back tends to do more harm than good.

"It's just mean-spirited," he says. "If you're willing to spend an extra $10,000 to give the kid another year of schooling, why aren't you willing to put some money into a tutor over the next two years? That's what we ought to do — not leave them back, but get them the resources."

Picking The Better Of Two Stigmas

To Get Kids To Class, L.A. Softens Its Hard Line

In a third-grade class in Cambridge, Mass., struggling readers get extra help from teachers like Jocelyn Marshall.

"We're just sort of trying to catch them every way we can and give them extra reinforcement, but it can be tough with having 20 students in a class," Marshall says. "We can't get to that one-on-one with very kid all the time."

Marshall says she's seen the downside of promoting students before they're ready, but she's also seen problems with keeping kids back: It saps their self-esteem and reduces teachers' and parents' expectations.

Harvard education professor Nonie Lesaux says kids who stay back are also more likely to drop out. "Everything we know about retention suggests it's potentially very traumatic and, socially, it's very stigmatizing," Lesaux says.

Skandera says retention alone isn't the answer — but when coupled with early intervention and extra instruction, it's an important last resort.

"When we talk about stigma and concerns — illiteracy is the stigma that we need to address," Skandera says. "This is not a 'gotcha' policy; it's an 'ensure-our-kids-are-ready-for-success' policy."

The trouble is that, so far, there's no clear answer on whether that policy actually works.

According to Ralph Smith, senior vice president of the Annie E. Casey Foundation, "Both sides will overstate what the little bit of research available says."

Smith says holding kids back is often seen as easier than developing lots of differentiated learning plans or investing in things like summer school. He says, "There are many people who are seizing on retention because they are looking for an easy answer to a complicated problem."

Or, as another academic puts it, this policy flunks kids for failing to learn. And given how widespread the problem is, maybe it's the school that should flunk for failing to teach.