Accessibility links
As Elkhart's Electric Dreams Fizzle, RVs Come Back The Indiana city known as the RV capital of the world took a hit when the economy — and with it, the demand for recreational vehicles — took a nosedive. Soon, the manufacturing-dependent area had the nation's highest jobless rate. Local officials pinned recovery hopes, and a lot of government money, on electric vehicles — a bet that didn't pay off. But now the RV business is picking up again. 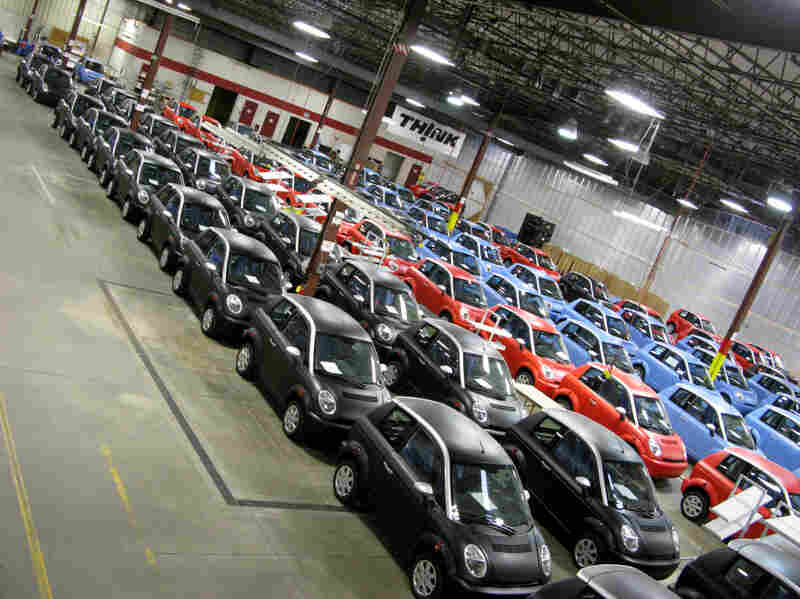 Most of these electric cars on the Think factory floor in Elkhart, Ind., are finished and ready to go, waiting to be sold. Some are merely waiting to be delivered to their new owners. David Schaper/NPR hide caption 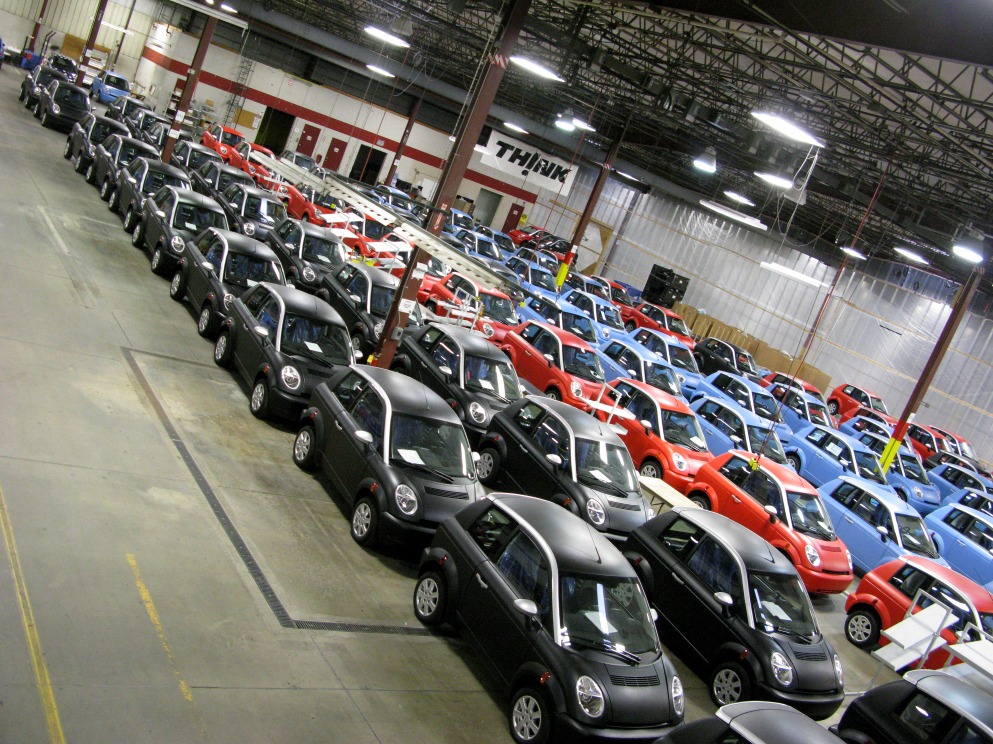 Most of these electric cars on the Think factory floor in Elkhart, Ind., are finished and ready to go, waiting to be sold. Some are merely waiting to be delivered to their new owners.

Elkhart, Ind., is known as the RV capital of the world. The city suffered badly when the recession hit and demand for recreational vehicles all but screeched to a halt. That's when local and state leaders started looking for ways to bolster the area's manufacturing industry.

The unemployment rate in the city along the Michigan border eventually soared to 20 percent — the highest in the nation at the time.

Electric cars were supposed to help revive Elkhart's economy. President Obama visited twice, promising stimulus funds to spark a new economic engine in electric vehicles. Those jobs never materialized. But like other hard-hit factory towns in the Midwest, Elkhart is starting to improve. And its RV industry is leading the way.

A Car Factory With 2 Employees

From the outside, Elkhart's Think Electric Vehicle factory looks deserted. There isn't a single car in the parking lot; the doors are all locked; the windows are dark.

It's not until you wander all the way around to the back of the 200,000-square-foot facility that there is a sign of life: one door left slightly ajar. Inside, several-dozen brightly colored, tiny electric cars sit in neat rows.

"All these cars are finished," says Rodney Smith, plant supervisor for Think EV. Pointing at cars that are painted red, blue and black, he says, "They're all finished and ready to go; we could hop in one of these and go down the road right now." 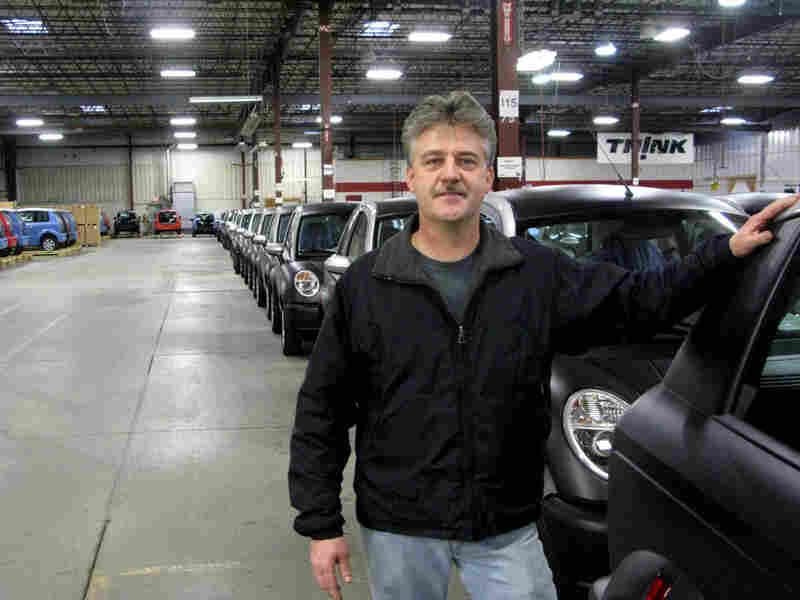 Supervisor Rodney Smith is one of only two workers still working at the Think electric car plant in Elkhart. David Schaper/NPR hide caption 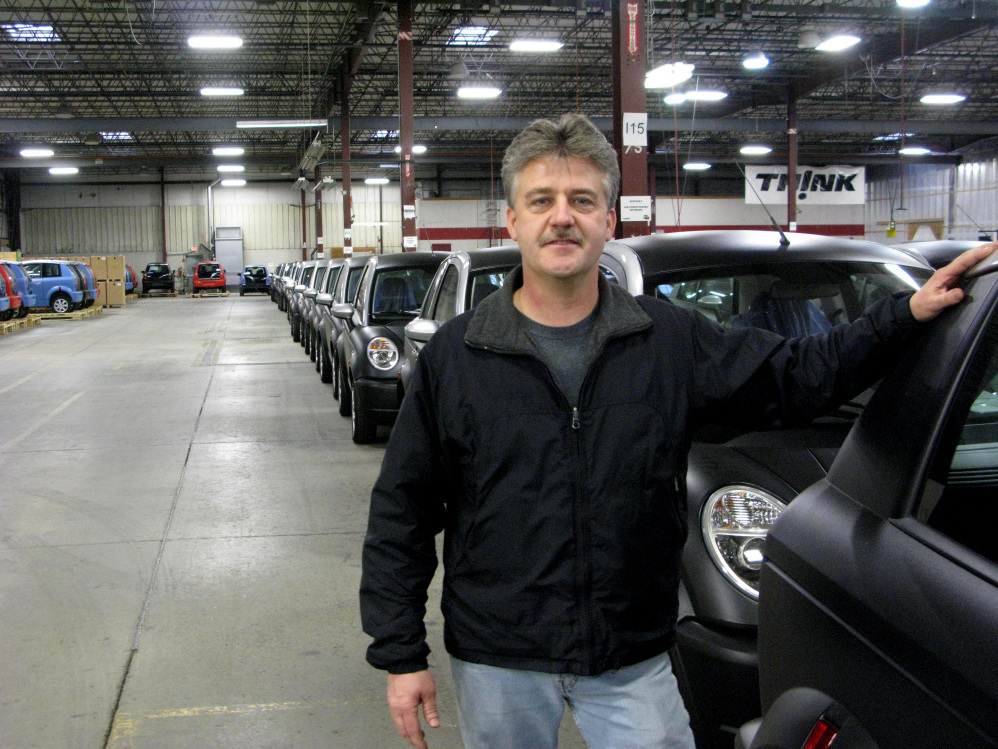 Supervisor Rodney Smith is one of only two workers still working at the Think electric car plant in Elkhart.

There are about 120 of these road-ready models, called the Think City — a little two-seat fully electric coupe that has a range of about 100 miles before it needs to be recharged.

"It's fun to work on," Smith says of the City car. "They're good little cars. They run great."

But at the plant, there are 32 more cars that are not yet fully assembled, he says. They're waiting for parts to come in; as components arrive, Smith and another worker finish putting the cars together.

That's right — just two employees are working in this auto plant. At its peak, the plant employed 25 workers. Then two waves of layoffs dropped the payroll down to just two people. It's a far cry from the more than 400 people the Think company promised it would hire two years ago.

Betting On A Boom In Electric Cars

Other companies lined up to make electric cars and trucks, and their parts, too, as Elkhart County, a place long known for producing gas-guzzling recreational vehicles, set out to jump-start its flat-lining economy with electric vehicles.

During his State of the State address in 2010, Indiana Gov. Mitch Daniels said, "Our goal is to be the capital of this potentially massive industry of tomorrow."

But two years later, Elkhart's electric buzz has gone all but bust. Two local electric startup companies never got off the ground. Navistar is manufacturing short-range electric delivery trucks, but not yet at the level the company had hoped.

And the Think plant has delivered only about 200 electric cars, many of them to government fleets. The parent company, Think Global of Norway, filed for bankruptcy last summer.

"The results were not anywhere what they thought they would be," says Elkhart Mayor Dick Moore. "We were looking at investment of, I think, $4.5 million in real property, about $55 million in personal property, and 415 jobs. None of that has taken place."

Even those interested in driving small and quiet electric vehicles have concerns about the battery life and range, as well as the cost. The Think cars are rather expensive for such a tiny little thing — more than $40,000, before government tax credits and incentives.

"Perhaps we as Americans just can't get over the enjoyment, the love that we have to get behind the wheel of a big powerful automobile," Moore says. "Maybe that's a part of our problem, I don't know."

There has not been much good news for backers of electric vehicles lately. Last week, GM announced it will idle production of its Chevy Volt for five weeks. And Bright Automotive announced it would shut down operation at a plant in Anderson, Ind. The company had planned to develop a lightweight electric plug-in truck and hire up to 300 workers in Anderson.

That news came a month after an Indianapolis company that makes batteries for electric vehicles, Enerdel, filed for bankruptcy. 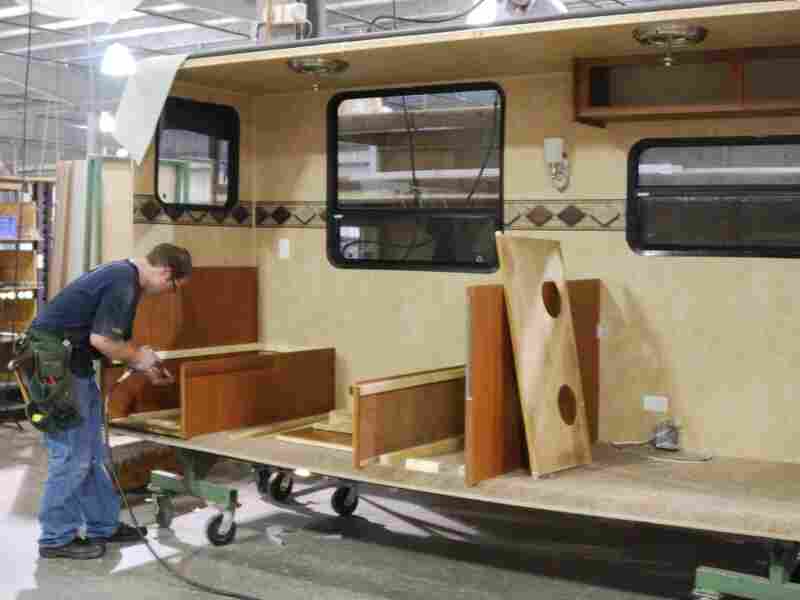 Clinton Lehman, who had been unemployed for nine months before being called back to work, assembles a recreation vehicle at the Jayco factory in Elkhart, Ind., in 2011. Mira Oberman/AFP/Getty Images hide caption 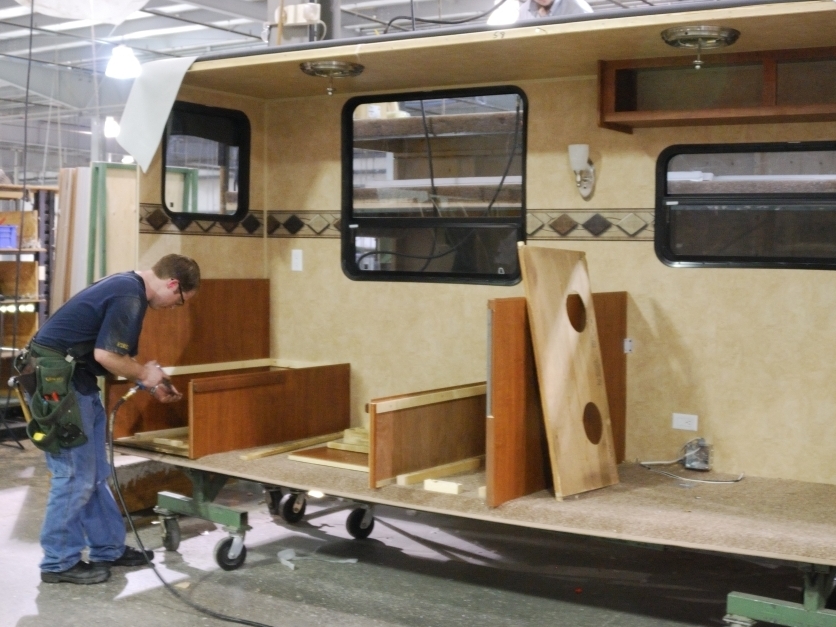 Clinton Lehman, who had been unemployed for nine months before being called back to work, assembles a recreation vehicle at the Jayco factory in Elkhart, Ind., in 2011.

In the meantime, Mayor Moore and many others in Elkhart are heartened by a rebirth of sorts in the industry that some here thought might never bounce back: the RV business.

"Rumors of our demise have been greatly exaggerated," says Gregg Fore, president of Dicor Corp. Its companies supply components to RV manufacturers.

Fore says the industry's downturn was brutal, with business falling off close to 60 percent. But demand for RVs has come back strong, he says. Last year, the industry produced more than 250,000 RVs. That's 100,000 more units than the low-water mark in 2009.

"People forget the deep roots of our industry. They don't remember we've been here for as many years as we've been here — a hundred years," says Fore, who is also chairman of the Recreational Vehicle Industry Association.

Dicor's factories are once again humming — and hiring, he says. And Fore believes the market for motor homes, travel trailers and campers is here to stay.

"People are still going to enjoy the lake, their kids, their relatives, the other campers, their beer, their ballgames, their hot dogs," he says. "That's the way it's going to be." 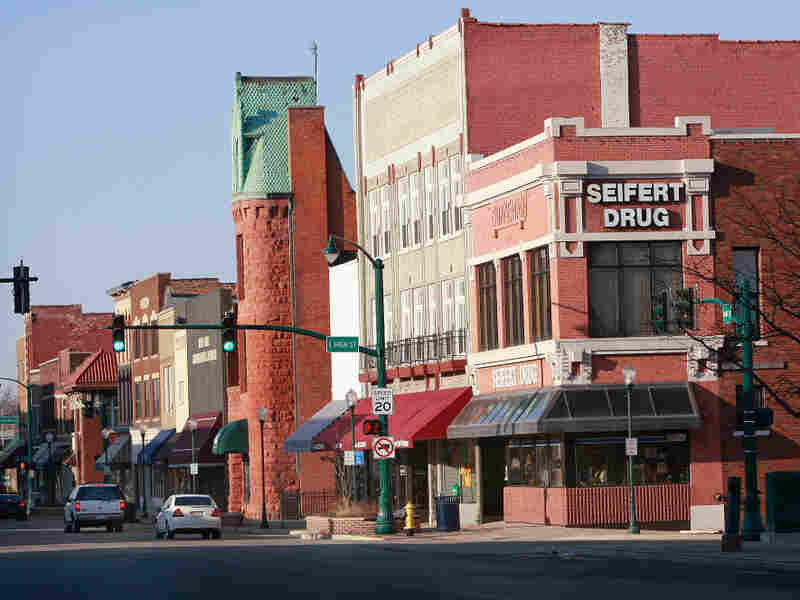 Main Street in Elkhart, Ind. The area was hit hard by the recession — nearly half of all jobs in Elkhart County are in manufacturing. Scott Olson/Getty Images hide caption 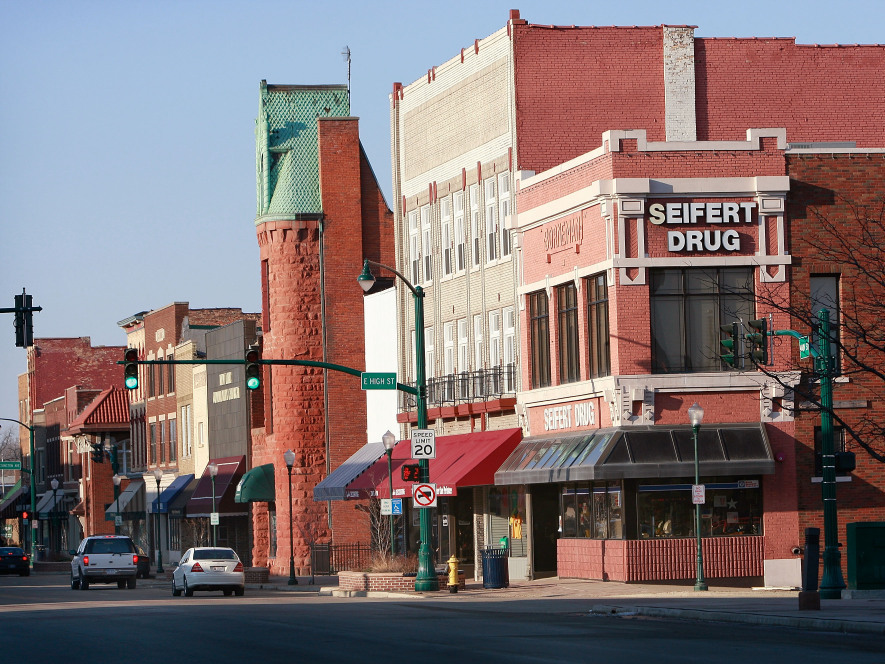 Main Street in Elkhart, Ind. The area was hit hard by the recession — nearly half of all jobs in Elkhart County are in manufacturing.

Despite the obvious differences between RVs and EVs, turning to electric vehicles as a way to try to diversify the Elkhart-area economy made sense.

"It was a risk," says Dorinda Heiden-Guss, president of Elkhart County's Economic Development Corporation. But, she adds, at the time, it was a risk worth taking.

"We were the highest unemployment rate in the entire country. We did not have any other opportunities of this significance that we were pursuing at the time, [and] it was being touted and reinforced by the federal government."

Heiden-Guss and others hope Indiana-made electric cars can still take off, but the heavy focus on this new, unproven industry rubs some in Elkhart the wrong way.

Enjoying a beer and a burger at a popular Elkhart bar called Wings Etc., Pierce says, "You know, the president comes here and, no disrespect to the president, but when you got the leader of the whole country here, and he's promising this and promising that, and it doesn't happen, it's pretty disheartening."

To be fair, the Obama administration delivered the grants local companies wanted to kick-start electric vehicle production; it's the companies that haven't delivered the jobs.

And others say Elkhart needed to try something new. They point out that even as the RV industry begins to recover, many family pocketbooks have not.

Mark Elliott, who works in maintenance in a manufacturing plant, says he's discouraged by something else.

The ripple effect of that is that bars such as this and other businesses around Elkhart aren't as busy. And tips for waitstaff and bartenders aren't as generous.

Others around Elkhart say that while there are many fewer people out of work now as the RV industry bounces back, they remain nervous about the future — and wary that the economy could tank again.