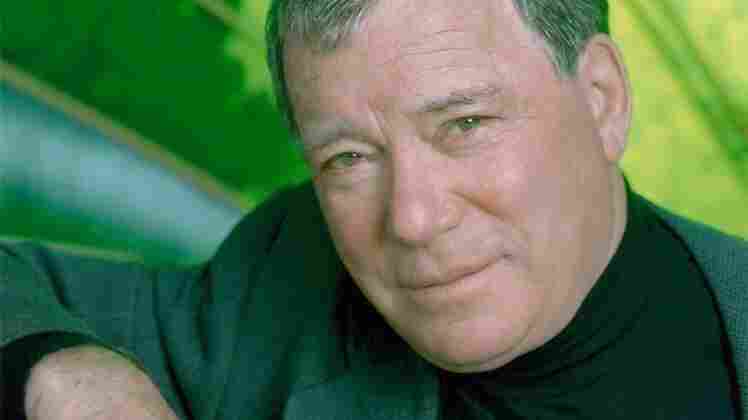 William Shatner, whose last Broadway appearances were more than 40 years ago, has returned to the stage with an anecdotal, autobiographical evening. William Shatner hide caption

William Shatner has played an attorney, a starship captain, an alien and a Roman tax collector, among many other roles. Over the past half-century, the Canadian actor has performed on television, in commercials, in movies and on Broadway — and penned several novels.

He recently returned to Broadway for the first time in over 40 years with a new solo show, Shatner's World: We Just Live In It. In the 90-minute performance, Shatner talks about his childhood growing up in Montreal and reflects on his many acting roles with an assortment of photos and video clips.

Shatner tells Fresh Air's David Bianculli that when he gets on stage each night, he doesn't think about his performance. Instead, he thinks about the show in the same way one would learn to ride a horse or ski or perform any other difficult skill. 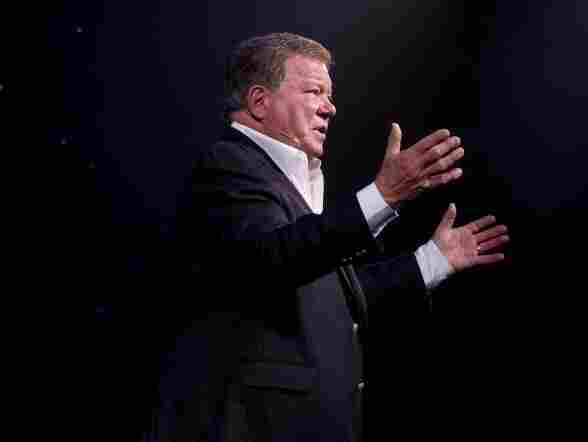 In his solo show, Shatner shares stories about his childhood, his father, and his lengthy acting career. Joan Marcus hide caption 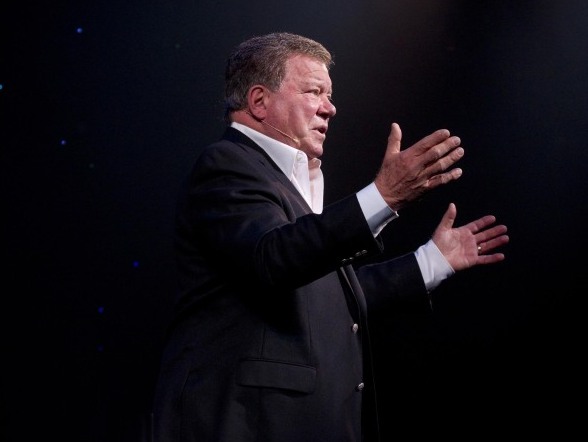 In his solo show, Shatner shares stories about his childhood, his father, and his lengthy acting career.

"It was like [watching] a sculptor putting the last touches on his sculpture, sanding his last moment, getting the last abrasion out of the thing that he had created," he says. "This garment, to my father, was his creation. And I talk about the hands that went to loom and the material that fitted it, and it became — in my mind's eye — a part of my father. So when I told the story of my father's death, it came to me that I would tell it through the act of his jacket."

Midway through the act, Shatner takes his jacket off and lays it to rest in a coffin.

"Then, the most moving moment for me is that I come to the conclusion that life doesn't have to end with death if love is present," he says. "And I put the jacket back on."

A sizable chunk of Shatner's performance, of course, is devoted to his iconic role as Capt. James T. Kirk. He speaks candidly about how Star Trek's popularity made him begin to see his own acting career in a negative way, until he heard Patrick Stewart speak about his own role on the show's sequel series, Star Trek: The Next Generation.

It's 'Shatner's World' And He Wants You To See It

"I have a lot of respect for Patrick Stewart, and [it was seeing] the gravitas that this great Shakespearean actor gave to his role that I suddenly realized that this guy is taking Capt. Picard every bit as seriously as Macbeth," Shatner says. "And I used to. And I stopped. And what the hell's the matter with me? It was a great piece of work. Everybody contributed to it for three years, and it has lasted 50. It's a phenomenon. Why aren't I proud of it? And that's when I had a moment."

After Star Trek, Shatner managed to create another iconic TV character, playing the role of Denny Crane on ABC's The Practice and Boston Legal. He says he envisioned the character as a lizard who sticks his tongue out.

"Why does the lizard stick his tongue out? The lizard sticks its tongue out because that's the way its listening and looking and tasting its environment," he says. "It's its means of appreciating what's in front of it. It sticks its tongue out to be sure that it's not going to be eaten. I thought, 'That's what [Denny Crane's] doing. He used to be a great lawyer. And when he said, 'Denny Crane,' I thought, who's he saying that for? How do you play that? I played it like the lizard saying, 'Denny Crane.' He's trying to say, 'Here I am,' but without being able to say it.'"

Shatner says the scenes that series creator David Kelley imagined for his character were both imaginative — and plausible.

"I remember one moment he was giving himself Botox injections, and something surprised him so he turned around in his chair and had a Botox needle sticking out of his forehead," he says. "In one moment, he's totally lucid, and in the other, he's totally insane. How extraordinary — what a character to play! To have had the privilege to have worked with those actors and directors and writers — I loved every one of them, and it was a sad, sad moment to say goodbye when the show was over."

"It's very easy to say no to leaving the house. I'm happy with what I got. No, I'm not going there. No, I don't want a new idea — the old idea is fine. No, I don't want a new thing — whether it's a president, an idea, a concept. No. And you're safe. You're right in your little hole; you haven't moved. And what you're doing before is what you're doing now. And that's safe. That's comforting, and you're going to die that way. 'No,' and you're put in your hole and that's fine and you're dead. 'Yes' requires you to move out of that hole. 'Yes' is like those little animals that pop their heads out and look around. But some of them don't go."

On the popularity of Star Trek

"I spent years doing Star Trek bits and things, and a lot of people loved it, a lot of people mocked it. They did their various comic turns on Star Trek, and I went with the joke because, what, you're not going to joke with the joke? At the time, I applied every talent I had to making it valid and working on story and fighting management and doing the best I could," he says. "There were many, many talents who did that. ... I did the best I could. So when I left Star Trek, I left it with pride and went onto other things. Then Star Trek started to become popular about six years afterward, when it went into syndication, and then people started talking about it."