Accessibility links
Let A Stranger Drive Your Car? More Owners Say 'Yes' Several new startups are connecting people who need a car with strangers who want to make a few extra bucks renting theirs out. Wheelz is one such peer-to-peer car-sharing company. The Silicon Valley startup is gaining traction on college campuses in the Bay Area. 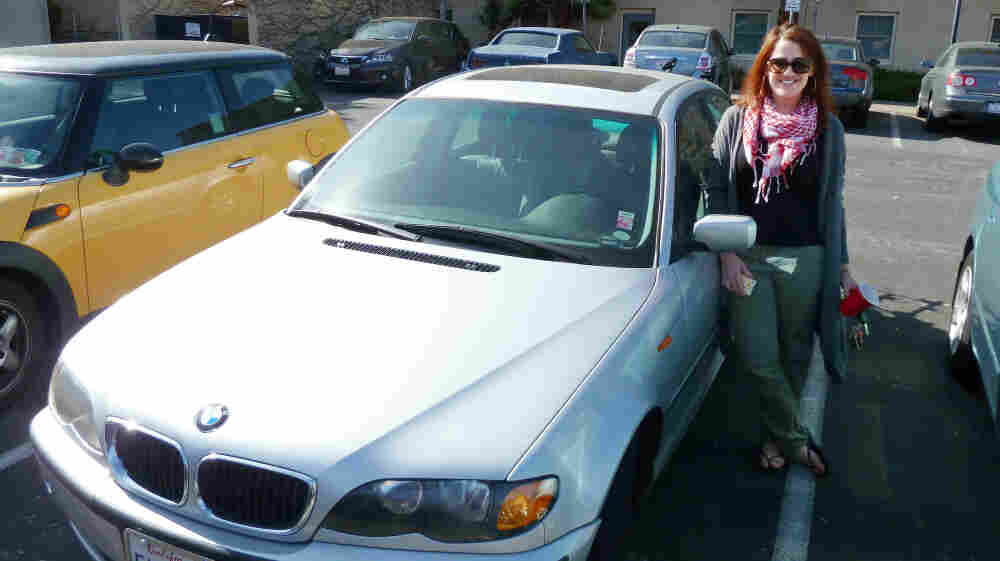 It would be difficult for some people to let a stranger drive off with one of their most valuable possessions. But not for Stanford graduate student Katie Hagey.

Hagey is one of a growing number of individual car owners who have started renting their wheels to people they don't know through car-sharing startup companies resembling the better-known Zipcar.

Hagey makes an extra $150 a month by renting out her car via Wheelz, a Silicon Valley car-sharing startup. Wheelz allows Hagey to name a price for others to "borrow" her silver BMW when it would otherwise be sitting unused in a campus parking lot.

"This was a great option to at least slow the hemorrhaging of money that is business school," Hagey says. She's so happy about the extra cash, she doesn't even mind when people adjust her seats or her stereo.

"One time the seat was really low and it was playing rap, like really, really loud," Hagey says. "I thought that was pretty comical because this isn't really a riding-low kind of car — it's a chick sedan."

To Borrow, Rather Than Buy

People can access Hagey's car much like a Zipcar or other shared vehicle. Renters hold a card up to a sensor on the windshield to gain access to the car. They then open the glove compartment, where a box containing the car keys is located. But unlike Zipcar, cars rented through Wheelz are owned by individuals, rather than by a company.

Stanford undergraduate student Jesse Clayburgh is a Wheelz user. He doesn't own a car, and dreads the idea of trekking to a rental counter — not to mention the extra fees he would pay for being younger than 25.

With Wheelz, Clayburgh can pick from more than two-dozen different cars kept right on the university campus. That came in handy recently, when he picked up a pretty girl at the airport.

A growing number of companies are offering peer-to-peer car sharing services. And while some have expanded their services nationwide, availability depends on where — and how many — car owners sign up.

RelayRides: Established in the Boston and San Francisco areas. Launching nationwide this month.

Wheelz: Available on Stanford and UC Berkeley campuses. Expanding to USC and UCLA in March 2012.

"I may or may not have been trying to impress [said] lady friend," Clayburgh says. "What I found was an Audi TT, which is a small two-seater — a little coupe that goes pretty fast. She was very impressed."

Wheelz founder Jeff Miller says there is a growing shift among American consumers away from owning assets, like cars, "to purchasing a service that helps you achieve the same end."

Miller says people already regularly loan cars to their friends and family. His company, he argues, just makes it safer and easier. The service screens customers to make sure their driving records are clean. Members are also required to sign up through Facebook, so the rentals aren't completely anonymous.

"It's actually a very personal transaction, and people respect the fact that it's another person's car," Miller says. "We've had zero [damage] claims to date, and thousands of reservations. And so far, so good."

But the concept of so-called "peer-to-peer" car sharing is still new. Wheelz just launched last year, as did Getaround, a service operating in three West Coast cities and Austin, Texas. RelayRides and JollyWheels have been operating for a little longer — but not by much.

An 'Uncertain And Unknown' Concept

Susan Shaheen, a transportation researcher at University of California, Berkeley, says car sharing is still "an uncertain and unknown and developing area. ... There's a lot of excitement and interest in it," she says, "but I think it's important not to put too many expectations on it as it's starting out."

Shaheen says the concept faces several hurdles. A big one is clarifying insurance laws. Another is developing a profitable business model. Shaheen estimates that peer-to-peer car-sharing companies could be profitable within five years if they increase their cut of the revenue for each transaction. Right now, participating car owners receive at least 60 percent.

That's a fair split as far as Hagey is concerned. After all, she's the one putting her car on the line.

"At this point, if the car got a dent and the dent was fixed, that's fine with me," Hagey says. "We'd be having a different conversation if the car was totaled."

Big companies, including General Motors and Zipcar, have taken notice of peer-to-peer sharing. They have invested millions in these startups, and that is fueling some ambitious expansion plans. Wheelz is scheduled to roll out on three more campuses in California by the end of the month.