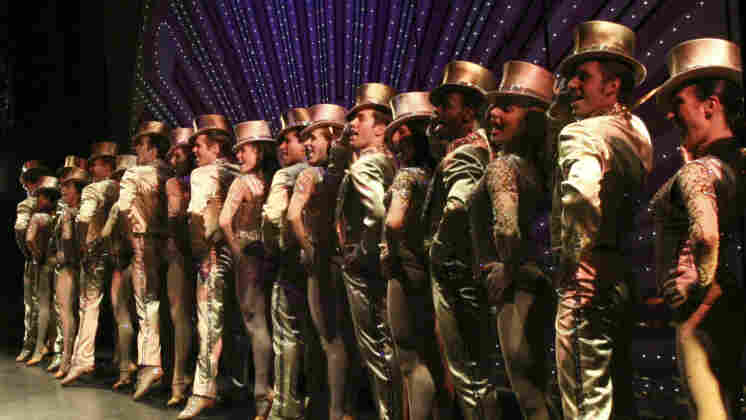 The cast of the 2006 revival of A Chorus Line. Donald Bowers/Getty Images hide caption

My first grown-up show: Oliver! Mom and me way up high in the upper balcony, watching all those kids down below.

One older character, Nancy, who looked a little like my mom, died in the second act — a development that I found pretty shocking — and by the time for the curtain calls, it still hadn't occurred to me yet that the actress hadn't died.

So everybody else comes out for applause, reprising the songs they'd sung earlier, which was the custom in musicals back then, including little Oliver, who sang a verse of a song that Nancy had taught him earlier.

Then he turned, as the rest of the kids chimed in softly, sounding almost like a church choir, and they all looked up, and sang the song directly to ... Nancy! She appeared in a spotlight, not down on the stage with everybody else, but way high up on a platform near the top of the proscenium arch, right in front of my second-balcony seat.

I was a smidge too old to think this was an actual miracle, and a bit too young to appreciate the stagecraft that made it all happen. All I knew was that Nancy was in heaven, and I was in tears.

After that, for the longest time I expected something special from curtain calls. I don't any more. They're just bows now, rarely as much fun as I remember them being in my youth, possibly because back then standing ovations were not routine, so directors and stars had to work for them.

Sammy Davis Jr. ended one lackluster Broadway musical by sending the cast home and doing a few numbers from his nightclub act. Kept the show running for months. Wouldn't happen today: Audiences love to go crazy with applause. It means the tickets were worth it.

I remember a few curtain calls where what triggered pandemonium was as simple as a costume change. At the close of Houston Grand Opera's landmark production of Porgy and Bess in the 1970s, the director decided to let audiences know how Porgy's crazy plan to travel a thousand miles to find Bess had worked out. That red dress he'd bought to surprise her, but hadn't been able to give her in the last act? She wore it for her bows. Audiences went wild.

Same thing happened in The Act with Liza Minnelli — a terrible show, though she'd looked great in one flamboyant Halston creation after another. Silver, white, blue, scarlet, gold.

It wasn't until she came out for her final bow that you realized there was one color you hadn't seen all night And there she suddenly was, spotlit in a blinding malachite gown, so emerald-encrusted she could've out-dazzled her mom in Emerald City. This was Liza in her prime, so the crowd would have stood anyway, but with that dress, they stood and screamed.

Snaps, Boos And Backtalk From The Stage

It's an odd convention, this banging hands together to show approval. In ancient Rome, crowds at the Colosseum had more varied methods — finger-snapping, toga-flapping, chanting — each indicating a different degree of excitement. Excitement, mind you, that was often paid for. That's why the French word for clapping — "claque" — became a term for people hired to applaud. By the 1800s, you had to pay for claqueurs at your opening in Paris. If you didn't, they'd come and boo.

People don't boo much any more, partly because ticket prices have made it an awfully expensive pastime, and partly because people don't care about theater the way they once did. Ibsen's premieres provoked actual riots.

Shaw took a few lumps too, though always with his characteristic sense of humor. At the debut of Arms and the Man, when he took his author's bow to general applause, there was one man down front who hissed. Shaw looked down and said, "My dear fellow, I quite agree with you — but what are we two, against so many?"

As that moment suggests, to the folks up on stage, curtain calls are still part of the show. Sometimes that's made explicit, as in the Royal Shakespeare Company's original production of Marat/Sade, a show set in an insane asylum. The inmates, some still drooling, lined up on the lip of the stage for their bows and clapped back rhythmically at the audience, squelching what would have been a standing ovation before it could begin.

This, in contrast to the usual, applause-boosting RSC practice of having the ensemble take individual bows, and then on some prearranged signal rush in unison toward the lip of the stage with a roar.

Pleased To Bits, Or At Least Pretending To Be

It's useful to remember that while the actors may seem sincerely grateful for your applause — may even be sincerely grateful — they're still performing up there. I found it quite moving the first time I saw Mame, just weeks after it opened in 1966: There was Angela Lansbury, tears streaming down her face as the audience stood for her.

Two years and 800 performances later, I saw her on tour — and again with the tears. I wondered if she kept a raw onion backstage.

Still, that's showbiz — as is applause, which you might think of as the audience's chance to be part of the act. I had a theater professor who said that we clap not just to show we like something, but also to let the performers know we understand it.

Say an actor delivers a big diatribe and ends it by stomping offstage, slamming a door behind him. When people applaud, they're saying "We get it; the emotion's clear; the moment works."

Same thing when there's a big finish to a musical number — as composer Stephen Schwartz establishes again and again in his monstrous hit Wicked. End on a big high note, with an orchestral flourish, and you all but force an ovation.

Extras, Gimmicks And Bodies In The Basement

Ideally, at a show's conclusion, you want to extend the applause — and the involvement of the audience. They'll keep clapping just out of politeness, as long as actors are coming out, but you can give them something more — say, one last laugh at a comedy.

The murder farce Arsenic and Old Lace did that in the 1940s in a way no one could afford to do today, paying 12 actors who hadn't been in the show to emerge for a bow at the end. For more than a thousand performances, they got howls — as the audience realized they were supposed to be the bodies buried in the cellar.

Back then, though, if you wanted the crowd to stand — and seriously, there was a time when audiences didn't stand for everything — it helped to have a gimmick.

The musical Woman of the Year saved one last bit of one-upsmanship for Harry Guardino, the leading man who'd been sparring with Lauren Bacall all night. (And losing, because she after all was the woman of the year.) At the curtain, Guardino brought a pitcher of water out with him, and as she was acknowledging her ovation, he poured it over her head.

Bacall stood there sputtering but beaming, and the audience roared at her being such a good sport. They also talked all the way home and to their friends afterward about her wet hair, which doubtless sold a lot of tickets. Late in the run, Raquel Welch — whose fan-base was somewhat different — took over the role. I'm guessing that wet-hair moment turned into more of a wet T-shirt moment.

Long runs can take their toll, so it's wise to calibrate a curtain call for maximum effect. I remember Yul Brynner touring in a pretty bedraggled King & I toward the tail end of his career. The production looked tired, and the applause was merely dutiful as the others smiled ingratiatingly down front at their curtsies.

But when it came Brynner's turn, he didn't ask for applause — what king would ask? He planted his feet wide at the very back of the stage, crossed his arms in that kingly stance of his, and just stood there glaring at the audience. For long moments. It was a command. He was the king, and he wasn't coming forward until the audience stood. So the audience stood. Could work only if you're Yul Brynner.

So is there a model curtain call? Well, conceptually, the one for A Chorus Line is pretty terrific, though in keeping with its "the-group-is-everything" ethos, it doesn't allow for individual bows.

Instead, the dancers who've been desperately auditioning all evening in rehearsal clothes come dancing on at the end, one-by-one, in gold satin-y costumes and top hats.

Not just the kids who got selected, but all of them. And not bowing, but doing the big kick-line number they'd been so desperate to be anonymous in: "One singular sensation, every little step she takes ..."

Individually singular, together, they are a sensation — and as the curtain falls, and the audience cheers, they're still kicking.