Accessibility links
Weekly Standard: Our Town Meetings The first Tuesday in March is town meeting day in Vermont. Geoffrey Norman of The Weekly Standard describes how town meetings provide resistance to big money in politics and imbues in people a sense of respect, responsibility and citizenship. 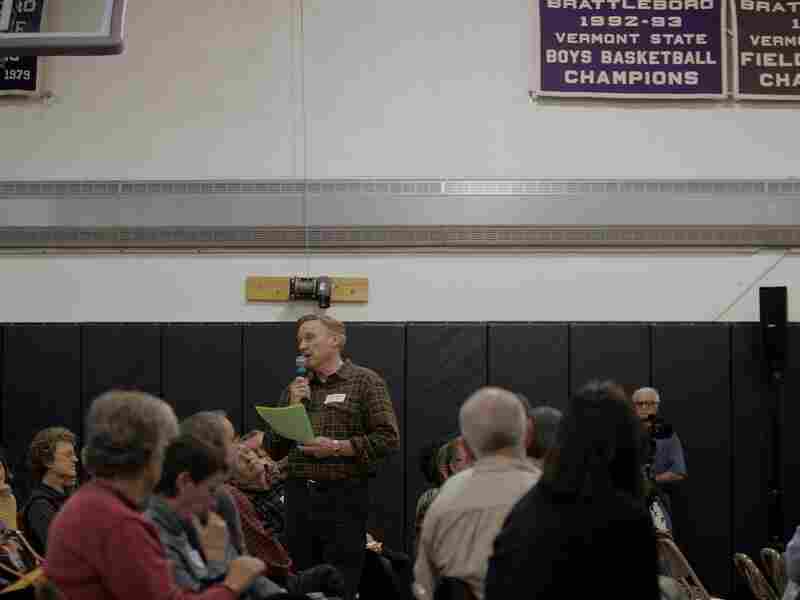 Steve Carlton speaks during a debate to vote on a resolution calling for the possible impeachment of U.S. President George W. Bush March 25, 2006 at a town meeting in Brattleboro, Vermont. Vermont's town meetings are one example American democracy. Joe Raedle/Getty Images hide caption 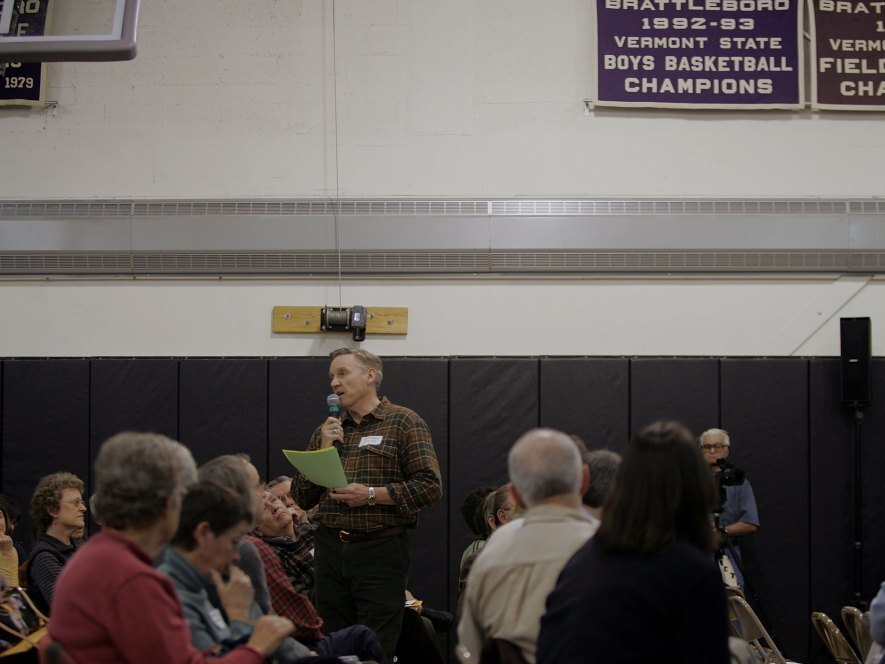 Steve Carlton speaks during a debate to vote on a resolution calling for the possible impeachment of U.S. President George W. Bush March 25, 2006 at a town meeting in Brattleboro, Vermont. Vermont's town meetings are one example American democracy.

Read Another Opinion On Democratic Institutions In The U.S.

The institution of town meeting has been romanticized by de Tocqueville who saw it as democracy at its most sublime. It has been sentimentalized by Norman Rockwell in his famous painting of a mid-20th century yeoman, standing to speak his piece. And it has been ideologized by modern day political movements that placed on the ballot — amid questions such has how much to charge for dog licenses — issues like nuclear disarmament.

It is easy enough to dismiss town meeting as irrelevant and a relic. Cynicism comes effortlessly in the age of Colbert and why should this quaint institution be exempt? Only about 25 percent of eligible voters show up for town meeting and most of the big issues — especially the election of town officers — are no longer settled by show of hands — or division of the house — but by Australian ballot. In a voting booth, that is, in secret.

Which seems a loss.

Meanwhile self-government has evolved into modern politics which has become an industry, and voters are persuaded and influenced by the same kind of people who sell soap and retirement plans, using identical sales techniques. No voter believes in the sincerity of the people making the 30-second arguments. Cynicism is the natural response and everybody accepts it.

But if that is true of elections to decide who will have authority over a government that taxes and spends trillions, things are somehow different when a few dozen people get together to hash out just how much money to spend for road salt this year. There is something sobering in trying to explain to your neighbor, face to face, just why it is necessary to tax him for, say, some repairs to the town library even though he has been down to look at the building, himself, and thinks that the roof is just fine. The dynamic of town meeting — debating in person matters of genuinely shared importance — imbues in most people a sense of respect and responsibility. Of citizenship.

At its best, then, town meeting engenders a mood of respect — for the business it is trying to accomplish and for the people involved.

Town meetings, of course, are not immune to the poisons of politics. They have been contaminated by people attempting to pack the house. In the old days, the men on the road crew might get all their friends and relations to come in just long enough to vote for the purchase of a new truck and an increase in overtime. These days, teachers do the same when they want budget increases in spite of enrollment declines, which is the trend all across the state.

Also, the institution has lost a lot of its former vitality because so many issues of importance are decided elsewhere. Sometimes by the state legislature and sometimes by unelected boards and commissions. The state is debating a very ambitious program that aims to eliminate private health insurance and institute a single payer system. A five-person board is currently at work on a plan. So far, the board has not decided — or announced, anyway — how much the plan will cost or what it will cover. These questions are, unsurprisingly, of intense interest but not up for discussion at town meeting.

More is the pity, since it would be illuminating to hear someone explain to his neighbor why he should pay to cover chiropractic services or aromatherapy for everyone in the state.

As town meeting loses its institutional vitality, it has been enlisted into causes far beyond its jurisdiction. In the early 80's, Vermonters attending town meeting to vote on school budgets and road repairs were obliged to listen to earnest speeches about the urgency of a nuclear freeze. Curmudgeons and traditionalists wondered why Vermont all of a sudden required a foreign policy. But the motions passed in some 150 towns so the organizers felt like they'd triumphed. The Pershing missiles were not, however, immediately withdrawn from Europe. The Cold War and the arms race went on in spite of Vermont's forcefully expressed opposition.

Nor was President Bush impeached, several years later, even though several Vermont towns went on record as believing that he should have been.

This year, the big issue that has been added to the agenda of some 40 town meetings is the need to amend the U.S. Constitution so that it would be possible to overturn the Citizen's United decision of the Supreme Court.

Vermont has fought a long and unsuccessful fight to reform and restrict the way political campaigns are financed. While defending, in the Supreme Court, the state's severe limits on campaign contributions, its Attorney General argued for limiting contributions to $400, which prompted the justices to wonder, out loud, if you could really buy a vote for that kind of money in Vermont. If that were the case, they surmised, then corruption in Vermont must be epidemic.

So the Chief Justice asked the Vermont attorney general how many prosecutions he had initiated for political corruption in the last year.

Vermont lost the case. But many of it citizens continued to believe, ardently, that there is too much money in politics and that it is corrupting in the truest sense of the word. The money flows into politics, of course, because the stakes are so high. And, since the stakes are so high, the money will find a way. But that argument doesn't seem to change many minds in Vermont.

Nor does its own experience with the campaign of Richard Tarrant, a successful entrepreneur who personally funded his race against Bernard Sanders for a seat in the Senate. Tarrant spent some $7 million campaigning in a state whose population is just over 600,000. Sanders, who spent less, cruised to victory.

But Vermont does not seem willing to buy into the proposition that money can't really buy elections. Only a lot of airtime for the broadcasting of irritating 30-second ads.

Finally, Vermont doesn't seem to accept the argument that limits on campaign spending serve as job protection for incumbents. This, in spite of the examples of its present Democratic governor, Peter Shumlin, and his predecessor, Jim Douglas, a Republican, both of whom would consider it a day lost if they had not done something to get in front of a microphone and make people love them.

Vermont, in short, is unyielding in its resistance to big money in politics and given the town meeting tradition, this is not merely understandable but laudable. It would be a welcome thing if we could conduct a national debate about, say, entitlement reform, without the fancy TV graphics but with the kind of civility and seriousness that a couple of hundred people sitting in a drafty school auditorium can bring to the question of whether the town really needs a new snow plow and, if so, how deep it is willing to dig to pay for it.

Town meeting may be a quaint institution but it still sets a fine example.