Accessibility links
Can Republicans Win Over Women In November? In 2008, Barack Obama corralled 56 percent of women's votes — 13 percentage points more than his GOP opponent. The question this year is whether the recent maelstrom over contraception, Congress, Catholics and conservative radio host Rush Limbaugh will widen that gender gap even further. 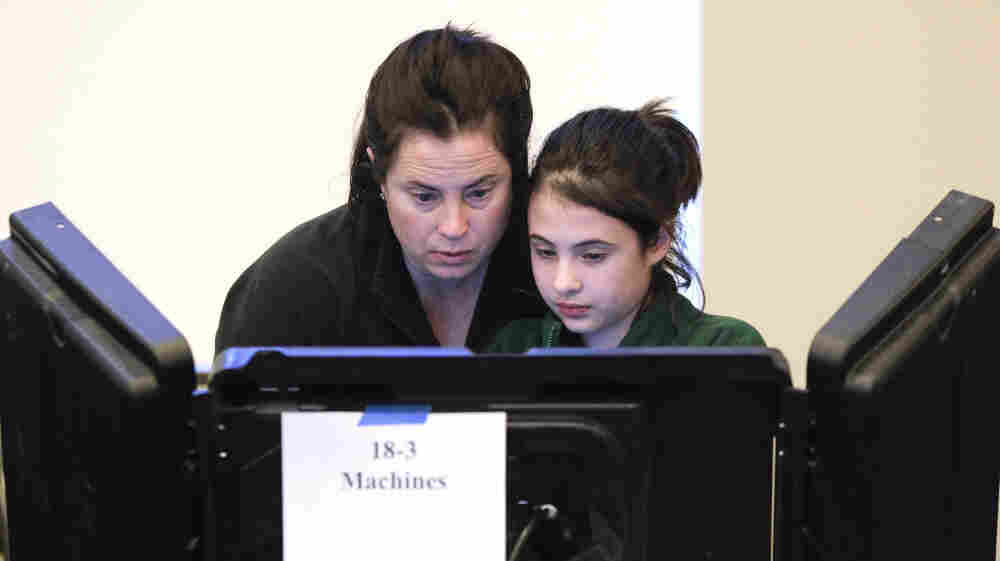 For the first presidential cycle in years, Republicans seemed to have a shot at overcoming Democrats' long-standing edge with women voters.

They fared better than Democrats among women overall in the 2010 midterm election — the Republicans' best overall national result among women in 18 years.

And 2012 seemed to have the potential to turn that good showing into a trend, a key advantage in an electorate where women make up the majority of all voters. 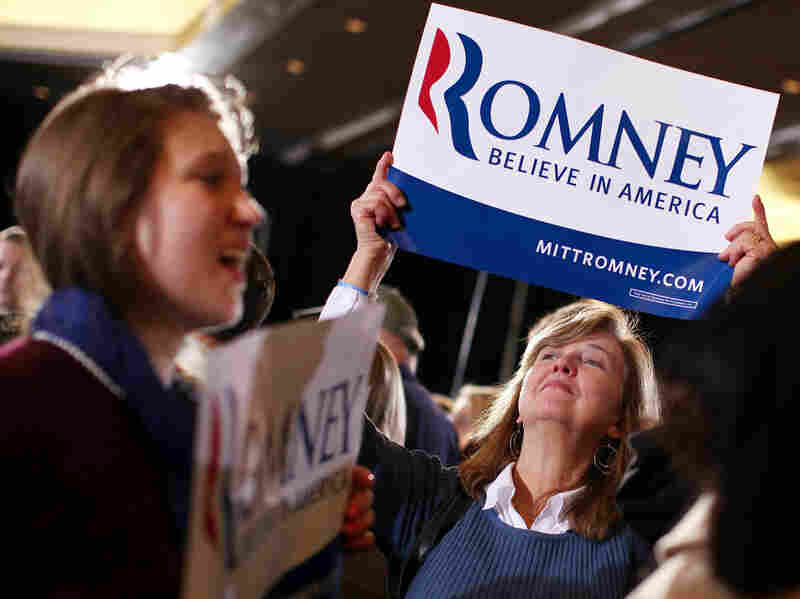 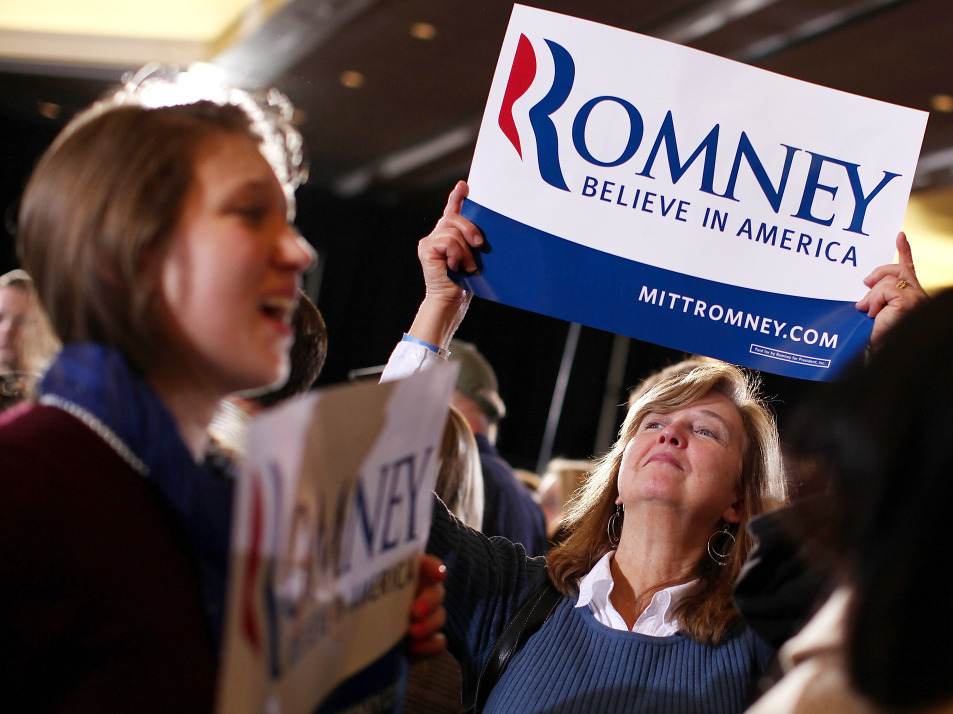 Polls taken as recently as the end of last year suggested that women's support for President Obama was weakening. In 2008, Obama corralled 56 percent of women's votes — 13 percentage points more than his GOP opponent John McCain. And, since women cast nearly 8 million more votes than men that year, Obama rode the gender gap all the way to the White House.

But the events of recent days are raising questions about whether Republicans, who so recently saw an opportunity to close the gender gap, may now be watching it widen given the recent maelstrom surrounding women, contraception, Congress, Catholics and conservative radio host Rush Limbaugh.

And surveys taken even before the commotion suggested that women were already starting to come back to Obama, giving him more credit than men were for economic gains.

Many Republicans are still shaking their heads at how quickly the debate turned on an issue where they had traction with a wide swath of the electorate.

Limbaugh's on-air characterization of a young female advocate of employer coverage of contraception as a "slut" and "prostitute" galvanized Democrats who had been attempting to establish a narrative that Republicans were attempting to meddle with women's rights and health choices.

Before Limbaugh's crude injection of himself into the discussion, the public was divided over a proposed federal rule that would require employers, including most religious organizations, to cover contraception as part of their health care benefit plans, according to a February Pew Research Center poll. 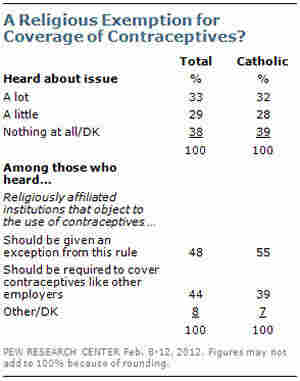 The survey, says Pew's Carroll Doherty, was taken during the time the Obama administration modified its proposal to include most, but not all, institutions affiliated with religious organizations in the coverage mandate.

But once Limbaugh weighed in, the debate center shifted from the question of religion and contraception coverage to women's private lives and their ability to speak in a public forum without being denigrated.

Obama telephoned the young activist, Georgetown law student Sandra Fluke, to encourage her to stay involved and suggest that her parents would be proud of her. On Tuesday he told reporters that he was motivated, in part, by thoughts of his own two daughters and how he would want them to be treated when they grow up and engage in issues publicly.

"I don't want them attacked or called horrible names because they're being good citizens," Obama said.

The head of Carbonite, one of the many businesses that have pulled advertising from Limbaugh's show, said on Facebook that he, too, thought of his daughters when he made his decision.

Ground To Make Up

The GOP candidates' tepid responses to Limbaugh's comments did not help the party's effort to woo women. They ranged from Santorum suggesting that as "an entertainer," Limbaugh "can be absurd," to Romney's "it's not the language I would have used." The superPAC supporting Newt Gingrich is running ads on Limbaugh's show.

"Republicans are not hostile toward contraception," says conservative pollster Kristen Soltis. "The real issue is what employers should be required to do, and what should government pay for."

"There are real arguments about the role and size of government, and the employer/employee relationship that can be very favorable to Republicans," Soltis says. "Unfortunately, the conversation has gone to birth control and value judgments about people who use birth control."

Conservatives have also argued that liberal and progressive commentators, including MSNBC's Ed Schultz and Chris Matthews, have made disparaging comments about women that prompted none of the outrage heaped on Limbaugh.

Liberals have, indeed, been more effective in making Limbaugh a symbol in a conversation that was already beginning to favor Obama.

An Associated Press-GfK poll conducted in February showed Obama's approval rating improving, and gaining with women who give him more credit than men for the strengthening economy. His support between December and February climbed 10 percentage points among women.

A Washington Post/Pew poll released this week showed that Obama was even gaining among white women, a group he lost in 2008. In January, white women preferred Romney 50-44 percent, according to Doherty of the Pew Research Center. By February, Obama had taken the lead, with 52 percent of white women saying they preferred the president to Romney, who had fallen to 46 percent.

The gap between men and women, however, has not been out of line with previous elections, though the survey was taken in the early stage of the contraception controversy, Doherty said.

At the end of the day, however, Democrats like consultant Kiki McLean say that it will be economic issues that drive the choices of women voters.

Access to contraception and health care are part of that economic equation for women, says McLean, a veteran Democratic campaign adviser, but "they don't stand alone."

"Women voters are very sophisticated, and they won't be taken for granted," she said. "The concept that women vote on a single issue is a falsehood — they care about the economy as much anyone else, from how it affects health care, job creating and taking care of their children, to building a business, and providing economic and educational opportunities."

On that, she and Soltis, the Republican pollster, agree.

"Economic issues will be what decide the election at the end of the day," Soltis says. 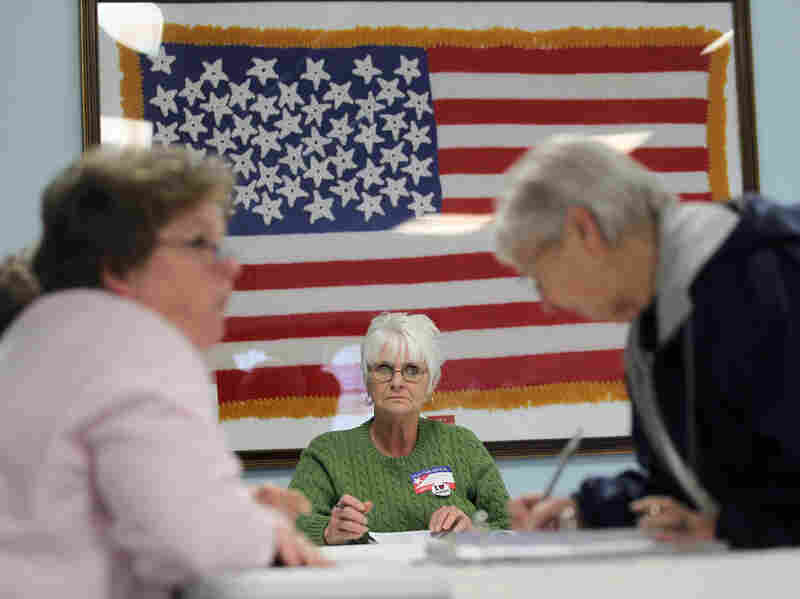 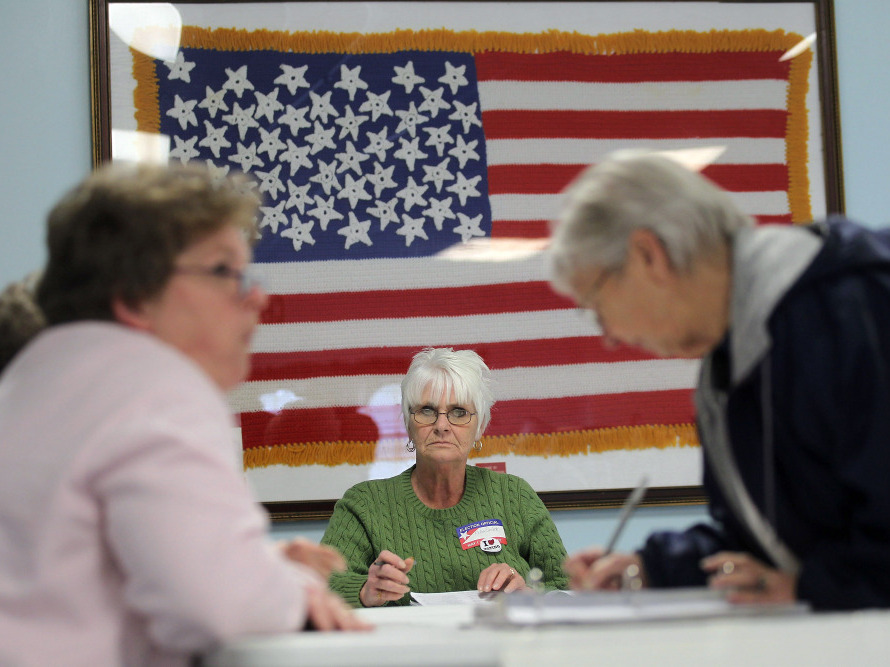 Poll workers assist voters in Carrollton, Ohio, on Tuesday. In the 2010 midterm election, Republicans did better overall among women than Democrats, the GOP's best result among women in 18 years.

Obama himself suggested as much at a White House press conference Tuesday, when asked about the Limbaugh controversy.

"There are millions of strong women around the country who are going to make their own determination about a whole range of issues," Obama said. "It's not going to be narrowly focused just on contraception. It's not going to be driven by one statement by one radio announcer."

"I'm not somebody who believes that women are going to be single-issue voters; they never have been," he said. "But I do think that we've got a strong story to tell when it comes to women."

While the events of the past several days haven't been helpful to Republicans, Soltis says she doesn't see them as decisive.

"There is plenty of time and plenty of opportunity," Soltis says. "If this GOP primary has shown anything, it's that a week is an eternity."

And it's certainly given women voters plenty to contemplate.