Accessibility links
With Cutbacks, Greeks Say Antiquities Are At Risk Greece has been making big cutbacks to its public sector as part of across-the-board austerity measures. This means there are fewer guards protecting the country's cultural heritage, and two recent thefts point to the dangers. 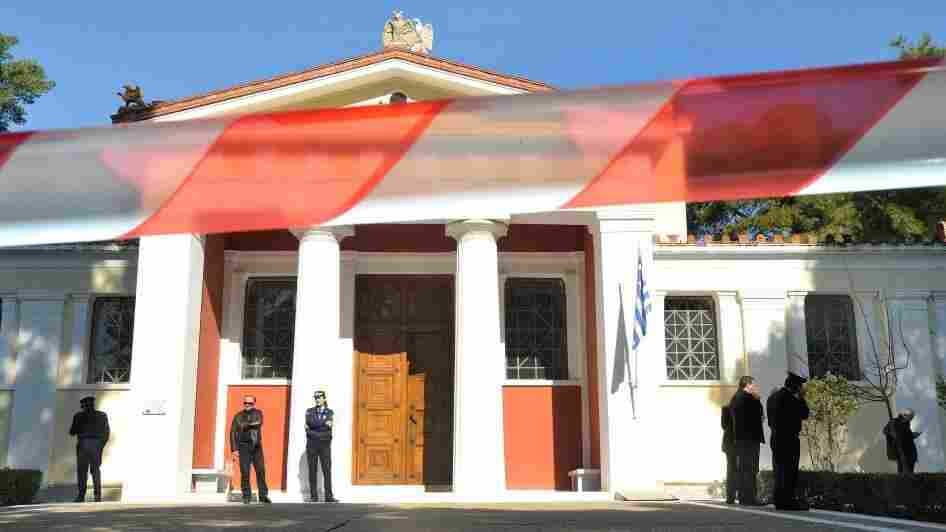 The entrance to the Museum of the Olympic Games in Olympia, Greece, is cordoned off last month, after two hooded thieves broke into the museum and made away with more than 70 ancient objects. The stolen loot included chariots, horses and a gold ring that was more than 3,000 years old. Greeks say such sites are vulnerable because of cutbacks that have reduced the number of guards. Dimitris Papaioannoy/EPA/Landov hide caption

At the Museum of the Olympic Games in Olympia, Greece, lush pine trees and olive groves are filled with chirping birds. The one guard at the site looks nervously at the few visitors.

There is still a sense of shock in Olympia following the theft last month at the museum, when armed robbers broke into the building and tied up the single guard on duty.

Archaeologist Kostantinos Antonopoulos says they ran off with 77 priceless objects, including votive figurines, chariots and horses.

"But the most precious and valuable exhibit that they took was a golden ring of the Mycenaean times. And it had a picture on it, very important from the early times of the games," he says, adding that the ring was more than 3,000 years old.

International creditors have pressured Greece to make severe cuts in its large public sector to help pay back billions of dollars in loans and avoid default. But the recent robbery at the Museum of the Olympic Games added to the sense that these cuts are making the country's vast cultural heritage increasingly vulnerable.

Even before the economic crisis, critics say that Greek governments were never generous in safeguarding antiquities from the cradle of civilization. Less than 1 percent of the budget was earmarked for the country's hundreds of museums, archaeological sites and monuments.

Greece is one big archaeological park. With growing poverty, more and more people are turning into tomb raiders working for shady art dealers.

The Culture Ministry says austerity policies have cut that sum in half. Ten percent of the Culture Ministry's archaeologists have been either laid off or forced to retire. And the number of guards has also been cut in half, to fewer than 2,000.

Nemea is another major archaeological site, with an imposing temple in honor of the god Zeus. But on a Sunday, it's closed.

"The reason it's closed is because there are not enough guards to keep it open," says archaeologist Stephen Miller as he looks at the site's thin wire fence.

Miller is the former director of excavations at Nemea, carried out under the auspices of the University of California, Berkeley. He's known for his discovery of the ancient stadium where the Panhellenic Games were held.

Miller is angry with Greece's international creditors — the IMF, the EU Commission and European Central Bank, known collectively as the troika — for what he says is a policy of indiscriminate budget slashing.

"It is very shortsighted. This is the last place you should make your cuts," says Miller. "I would like to think the troika would understand that. The antiquities of Greece are not recognized for what they are, and that is the treasure of Greece, the resource Greece has that is unique to Greece."

Just a few weeks before the Olympia robbery, Athens' National Gallery was the victim of the first theft in its 112-year history. There, too, there was only one guard on duty.

The loot included a painting by Dutch artist Piet Mondrian and a Picasso that had been his gift to the Greek people in recognition of their resistance to the Nazi occupation.

Despina Katsoumba, president of the Union of Greek Archaeologists, blames Greece's creditors for exposing its cultural heritage to plunder.

"They are like children, they cannot protect themselves," he says. "We will appeal to other European — and not only [European] — countries to [help us] make a shield for this cultural heritage."