Accessibility links
Girl Scouts: 100 Years Of Blazing New Trails One hundred years ago Juliette Gordon Low gathered together a group of girls to take them out of their isolated home environments and introduce them to community service and the open air. A few things have changed since then for today's girls. 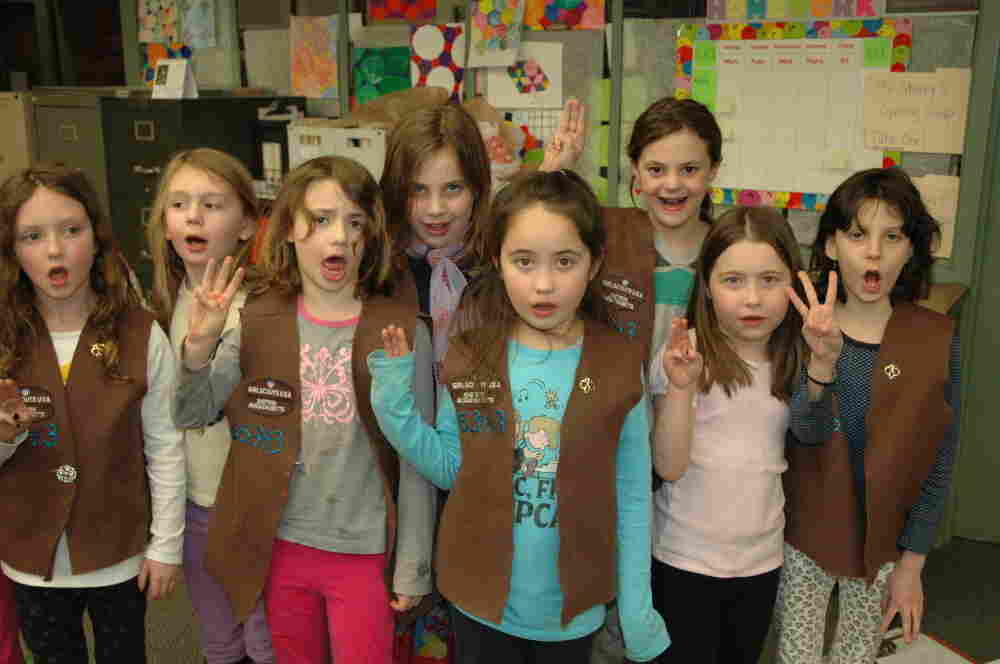 Brownies from Troop 65343 in Brookline, Mass. recite the Girl Scout pledge. Enrollment in the organization has declined since the 1980s, but a modernizing makeover and new focus on minority and immigrant communities have helped some. Tovia Smith/NPR hide caption 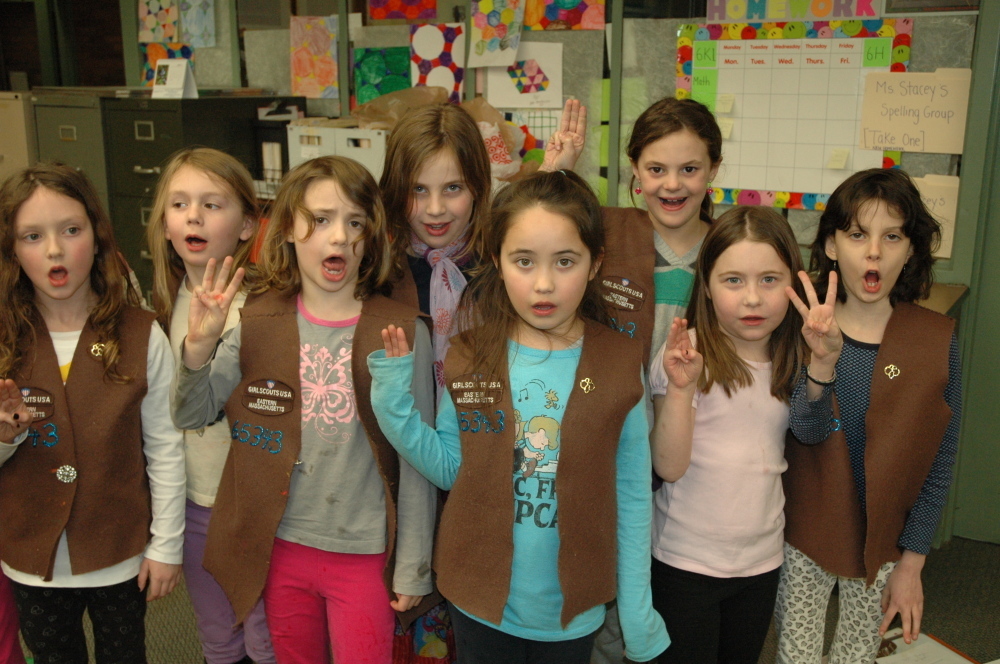 Brownies from Troop 65343 in Brookline, Mass. recite the Girl Scout pledge. Enrollment in the organization has declined since the 1980s, but a modernizing makeover and new focus on minority and immigrant communities have helped some.

It's hard to imagine Hillary Clinton, Condoleezza Rice and Lucille Ball as part of the same club. But they were all, at one time, Girl Scouts. Founded 100 years ago in Savannah, Ga., the Girl Scouts now count 3.2 million members.

Girl Scout cookies have become as much of an American tradition as apple pie. At a busy intersection in Brookline, Mass., a gaggle of Girl Scouts stand behind a folding table piled high with boxes of Thin Mints, Samoas and Shortbreads.

Seeing cookies come out is a great sign of spring. It's a warm feeling and I guess that makes people smile.

"They are really, really good," the troop collectively assures a prospective buyer.

Forty-five-year-old customer Bill Hartman, whose mother was a Girl Scout troop leader, buys two. "Seeing cookies come out is a great sign of spring," he says. "It's a warm feeling and I guess that makes people smile."

Generations of girls grew up in those green uniforms, making memories with cookies, crafts and campfires.

"While they learned to build fire together, they couldn't help but learn about getting along with each other," says the narrator in a 1950s Girl Scout film showing girls in long skirts and white gloves learning how to use a jack knife and live in the wilderness.

But not everyone approved. "I wanted to be a Girl Scout, and my mother wouldn't let me," 57-year-old Linda Papatopali says. "She didn't want me to go camping. To her, that wasn't femininity."

Today, Girl Scouts are still all about breaking the mold, and blazing new trails. But the frontier has changed. As the badges on their vests show, this is not your grandmother's Girl Scouts. 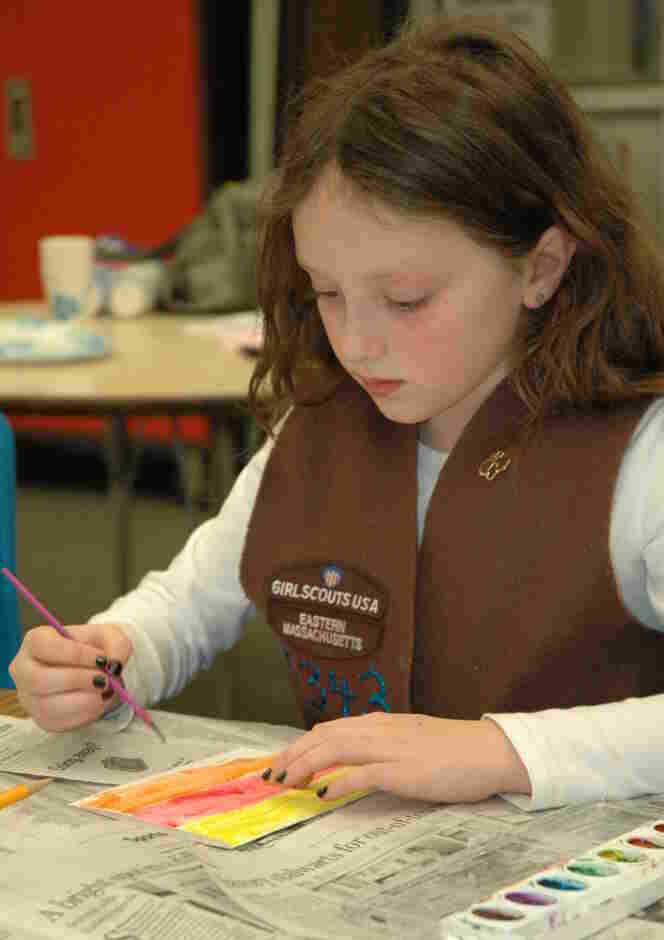 A member of Brownie Troop 65343 works on an art project at a troop meeting. Tovia Smith/NPR hide caption 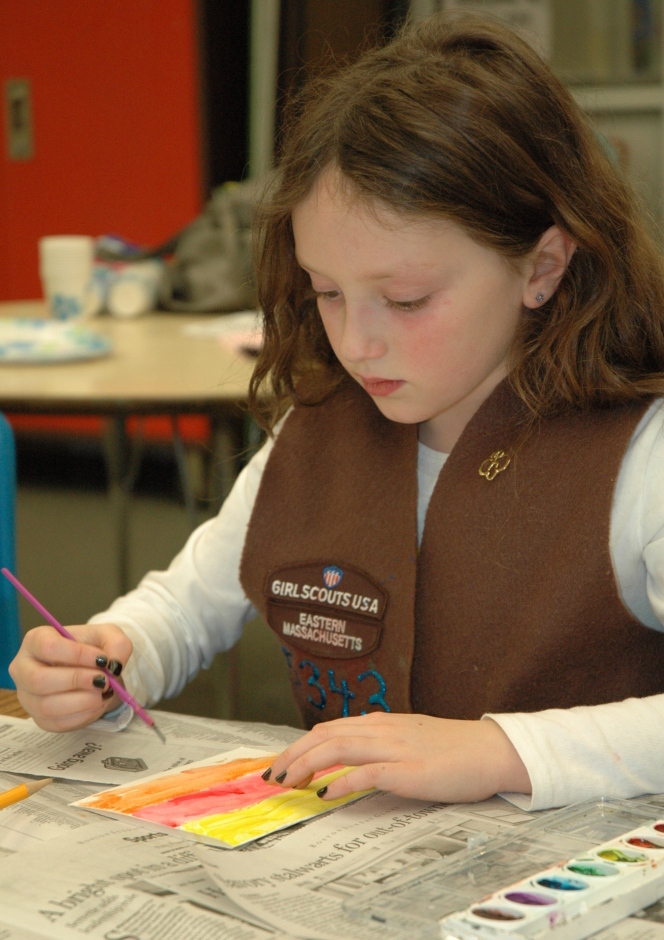 A member of Brownie Troop 65343 works on an art project at a troop meeting.

Eleven-year-old Elizabeth Huebner has earned far more badges for science than for sewing. And she'll get math badges for learning about everything from counting money to managing credit and financing college. The Girl Scouts say they're continuing an old tradition of being just a little bit nontraditional.

At a meeting of Troop 65343, two Brownies show off a collage they made about the Girl Scouts founder, Juliette Gordon Low. Impressed by the youth scouts she encountered in England, Low gathered 18 girls together on March 12, 1912, to form the first troop of American Girl Scouts. Her aim was to get girls out of their isolation at home and into the outdoors, and make them resourceful and ready to become homemakers and professionals.

At a time when American women still couldn't even vote, Low was offering girls badges for aviation and inviting them to play basketball in their bloomers. Known for her mettle and her spunk, Low even used her deafness to her advantage – as legend has it, she used to say that being deaf meant she never had to take 'no' for an answer.

Low was unhappily married, and had decided to divorce her philandering husband when he died. Showing a bit of the same verve as their founder, the Brownies have titled one of the pictures on their poster "Low and her bum husband." As the girls giggle furiously, one wonders if they should edit that part out. "But, it's true!" the girls insist.

Back out at the cookie table, the sun is close to setting, and the tough get going. "You can be prepared for anything," Elizabeth Huebner says. "But this is exhausting and my hands are frozen." Nine-year-old Michelle Hughes steps up her sales pitch. "You know you want some," she calls out to passers-by.

It is no coincidence, Girl Scouts say, that the vast majority of women who end up CEOs, or, for that matter, congresswomen or astronauts, started out as Girl Scouts. But enrollment has declined since its peak in the 1980s. A makeover aimed at modernizing their image, and new focus on minority and immigrant communities, have helped boost their numbers a bit. Today, there are troops in far-flung rural areas, troops in housing projects, and troops for girls with parents in prison. As a spokesperson put it, "If you are a girl, we want you."

I wanted to be a Girl Scout, and my mother wouldn't let me. She didn't want me to go camping. To her, that wasn't femininity.

Last year, when a transgender 7-year-old joined a Colorado troop, some assailed the Girl Scouts as radical and called for a cookie boycott. But at this intersection in Brookline, the controversy seems to have brought out more support. "It's a big reason why I want to buy cookies," 22-year-old Gillian McLeod Tardiff says. "I want the Girl Scouts to know I support them."

By dinnertime, the scouts are down to their last four boxes and still unwilling to quit. Hoping it will get them attention, they crank up a CD player, and 11-year-old Elizabeth Huebner starts dancing on the sidewalk. Sure enough, within minutes, the cookies are sold out.

These girls really have learned to believe they can do anything.

"If we are still alive we'll do another story for the 200th anniversary," Hughes offers.