Accessibility links
Foreign Policy: The Return Of The King Europe remains mired in the lock of economic doldrums. James Poulos of Foreign Policy writes that the European Union's precarious weakness makes plain that unity is to be found not in abstractions or bureaucracies but in the leadership of particular, flesh-and-blood human beings. 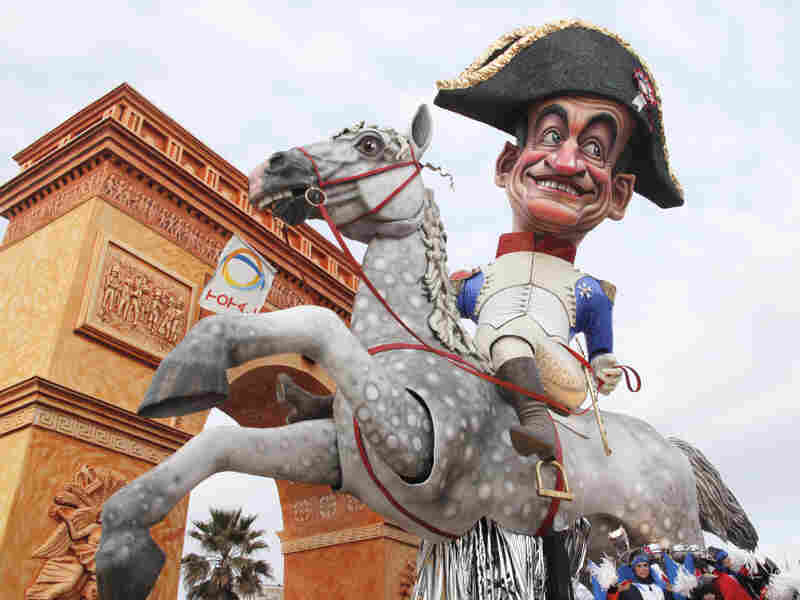 A carnival float called "Grandeur" showing French president Nicolas Sarkozy dressed as Napoleon on a horse during a parade during the carnival in Viareggio, Italy on Feb. 5, 2012. Fabio Muzzi/AFP/Getty Images hide caption 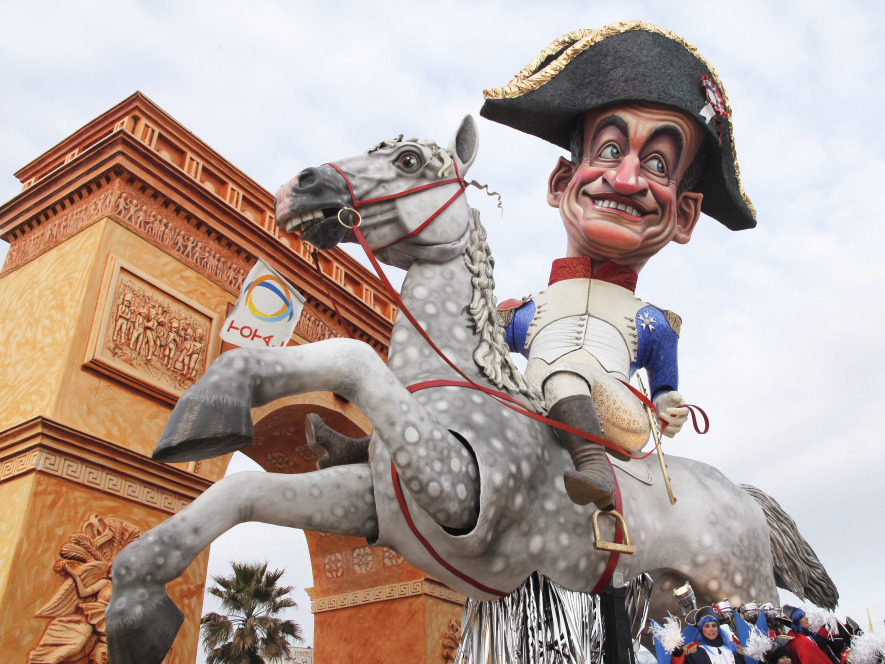 A carnival float called "Grandeur" showing French president Nicolas Sarkozy dressed as Napoleon on a horse during a parade during the carnival in Viareggio, Italy on Feb. 5, 2012.

Read Another Opinion On The European Debt Crisis

Nearly 200 years after his death, Napoleon Bonaparte is finally getting the greatest honor our age can bestow: his own theme park. Napoleonland — stop laughing — was concocted by a former French minister to rival Disneyland in its immersive fun and totemic cultural status. Shopping! Dining! Re-enactments of the Battle of Austerlitz! Not a bad rehabilitation for an all-conquering megalomaniacal exiled emperor.

Truth be told, there's a serious lesson to be found in the fact that Europe will soon have a Napoleonland — but never, for instance, a Hitlerworld. Unfortunately, Anglo-Americans are apt to unfavorably compare the head of the First French Empire to the leader of the Third German Reich. "A country which can still partly revere such a man surely has a problem," says British journalist Stephen Glover of France and Bonaparte. "We would probably be wrong to equate Napoleon with 20th century totalitarian monsters such as Hitler and Stalin, but he was nonetheless a new sort of terrifying leader" with what Glover calls a "destructive will." Historian Victor Davis Hanson does come close to equating the two, associating "the nightmarish spread of Napoleon's Continental System and the Third Reich" with the longing of "self-described European 'visionaries'" to unite Europe's peoples "under one grand — and undemocratic — system, willingly or not." And Claude Ribbe, a member of France's own human rights commission, even blasts Napoleon as genocidal.

But while both Napoleon Bonaparte and Adolf Hitler possessed hegemonic ambitions and left ruin in their wake, the contrasts between the two are rich with significance for Europe's future. Hitler, a plebian and civilian, sought to absorb Europe into a political party, not extend it with an empire. Bonaparte, a professional soldier born to Genovese nobles, spread his armies across the continent in a quest for political unity, not racial Lebensraum.

We'd do well to contemplate why the closest modern Europe has ever been to such unity is when it was Napoleonland. As the European Union's paltry political authority heads for the funeral pyre, German economic strength is still no match for the unifying power of historically French ideals and the relative legitimacy of French political leadership.

Yet influential Western commentators are holding fast to the idea that a veritable Fourth Reich of German efficiency is the only way to save Europe. Pro-German prognostications hold sway. In Niall Ferguson's imagining of Europe in 2021, the United States of Europe, which has replaced the EU, is dominated by Germany from a Viennese headquarters. "German officials talk excitedly about a future Treaty of Yalta, dividing Eastern Europe anew into Russian and European spheres of influence," Ferguson writes. Critics call new Europe the "Wholly German Empire." It's Deutschland über alles again, only economics is king.