Accessibility links
Please Read This Story, Thank You Listen to conversations these days, and you may notice that responses such as "thank you" and "you're welcome" have fallen by the wayside in favor of the casual "got it" and "you bet." Are we finding new ways to say old, polite phrases? Are good manners merely morphing? Or are they fading away altogether? 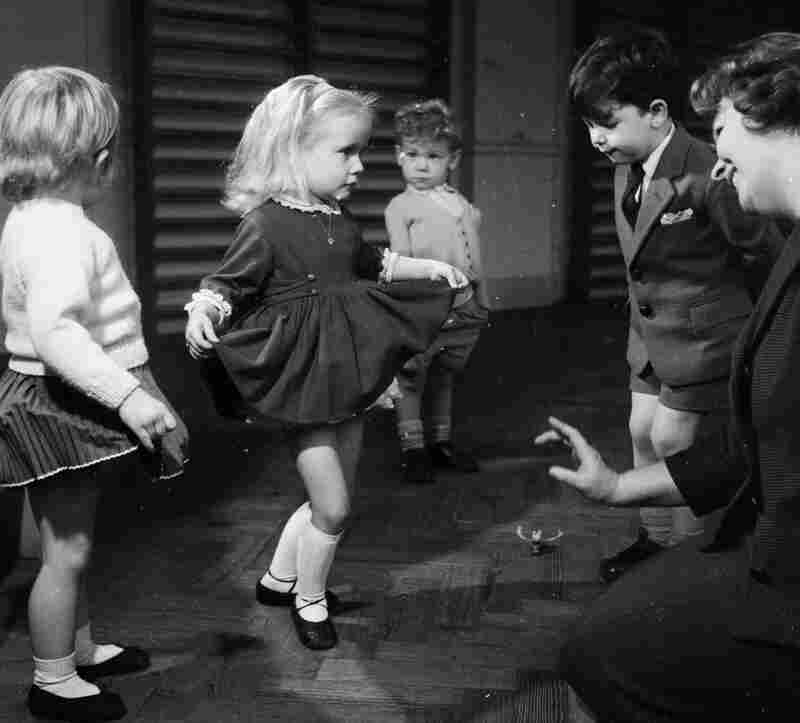 Politeness seems to be falling by the wayside these days, with phrases like "you're welcome" replaced by the more casual "you bet" or "no problem." Good manners were more the norm in 1960, when these kids at a junior theatrical school learned how to curtsy and bow. Chris Ware/Keystone Features/Getty Images hide caption

Listen to the conversations around you — colleagues at the office, customers in the coffeehouse line, those who serve you, those you serve, the people you meet each day. "Give me a tall latte." "Hand me that hammer." "Have a good one."

Notice anything missing? The traditional magic words "please" and "thank you" that many people learn as children appear to be disappearing.

Lisa Gache, co-founder of Beverly Hills Manners in Los Angeles, has noticed the gradual vanishing of courteous language. She blames the casualty on the casual. "The slow erosion of the 'magic words' in our everyday vernacular," says Gache, who coaches people to be more civil, "has to do with the predilection toward all things casual in our society today. Casual conversation, casual dress and casual behavior have hijacked practically all areas of life, and I do not think it is doing anyone a service."

Other polite phrases also seem to be falling by the wayside. "You're welcome," for instance. Say "thank you" to someone these days, and instead of hearing "you're welcome," you're more liable to hear: "Sure." "No problem." "You bet." "Enjoy." Or a long list of replies that replace the traditional "you're welcome."

Instead of saying "thank you," people say "got it." Or "have a good one." Or, more often, nothing at all. And in lieu of saying "no, thank you," reactions such as "I'm good" are increasingly common.

"The responses 'have a good one,' 'I'm good' or 'you bet,' do not carry the same sentiment or convey the same conviction as when we are sincerely expressing our gratitude or thanks," Gache says. "They feel less invested, almost as if they are painful to utter under our breath."

Please excuse us for asking the questions: Are we just finding new ways to say old, polite phrases? Are good manners merely morphing? Or are they fading away altogether?

"Simple things that we took for granted as children no longer seem to count," says Gregory E. Smith, a psychiatrist and blogger in Augusta, Ga. Smith says he has noticed a tectonic shift during his 25 years of practicing medicine. "Saying please and thank you, asking permission, offering unsolicited help, and following up on solutions to problems are no longer as important."

He also has observed a drastic change in everyday transactions. "Go through any drive-through at a fast-food restaurant in America. Go through any checkout line in a grocery store. Stand in line at a convenience store. If you are very lucky, the person waiting on you will make eye contact. Maybe they will speak. More likely, they will hand you your drink and bag while looking back over their shoulder, never even acknowledging your personhood much less your status as a customer."

Simple things that we took for granted as children no longer seem to count.

The checkout person "will check you out," Smith says, "all the while being 'checked out' emotionally from the situation. Worst of all, as I experienced in an airport in the last couple of years, a kiosk worker will blandly bag your item, swipe your debit card, hand you your receipt, all while having a conversation on her cellphone. Amazing. Outrageous."

Margaret Lacey, on the other hand, finds that many people are quite well-mannered in her everyday life. A sophomore at the College of Charleston — in the South Carolina city that is often cited as one of the most courteous in the country — Lacey notes that people can be polite without trotting out the traditional niceties.

She describes a typically routine encounter: "At the grocery store cafe down the street, I go get a coffee every morning," Lacey says. "This morning I walked in and they said, 'Good morning, will you have the usual?' I smiled and said, 'Yes, please.' They asked me how my morning had been while making my coffee. On the way out the door they said, 'Enjoy. See you tomorrow.' "

Neither does etiquette maven Cindy Post Senning, a director of the Emily Post Institute in Burlington, Vt. The institute, dedicated to promoting etiquette and civility, was established more than 60 years ago by Emily Post, who wrote a landmark book on manners, Etiquette, in 1922.

To Senning — who is Emily Post's great-granddaughter — etiquette and courtesy encompass two interrelated and essential components: principles and manners. "The principles of respect, consideration and honesty are universal and timeless," she says. But "manners change over time and from culture to culture."

In-Flight Etiquette: How To Keep Peace In The Cabin

Survey Says We R Rude; How About U?

To strengthen relationships, she says, "we need to articulate these principles in all our interactions. It is respectful to make requests rather than demands, to show gratitude and appreciation, to greet others, to give our complete attention, to acknowledge appreciation shown, to acknowledge and show respect for age, standing, importance."

However, when it comes to the actual articulation, she says, "the words we use do change."

For example, Senning says, it is important to show respect for other people by greeting them when you first see them — in the hallway, at a meeting, on the street. The form of greeting, though, has morphed over time.

As a result of the metamorphosis, Senning says, "today it would sound a little stilted and perhaps even disrespectful if a sarcastic tone is used to say 'How do you do?' "

And what about other popular substitutions, such as "no problem" for "you're welcome"?

Senning says she prefers the latter, "but if the appreciation is expressed in a genuine manner, I do not see its use as a loss of courtesy."

She agrees with Smith, the psychiatrist, and many others that the phrase "you're welcome" has long been the commonly accepted courteous response. But she also acknowledges that the norms — and the manners and the mores — may change.

"What won't change," she adds, "is the importance of acknowledging appreciation expressed."