Accessibility links
Actress Sues IMDB, But It's Internet Privacy On Trial Actress Junie Hoang has sued the Internet Movie Database, which is owned by Amazon, because the site reveals her age. She believes that could cost her work. It's more than a case of Hollywood's age prejudice, starting with where Amazon got her birth date in the first place. 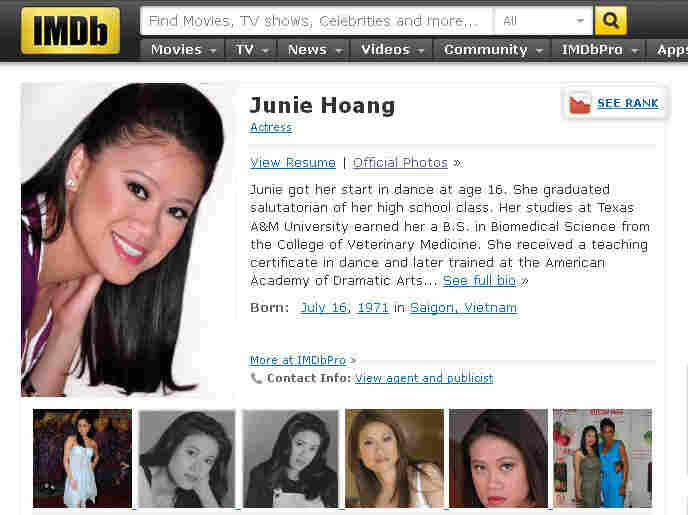 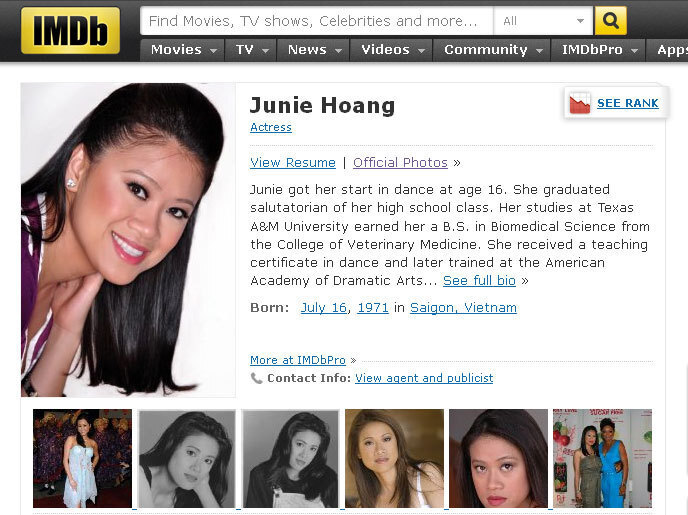 Actress Junie Hoang is going to court because her IMDB profile reveals her age.

I hope it's not ungentlemanly to note that Junie Hoang is 40 years old. Her birth date appears in the Internet Movie Database, or IMDb, as does the fact that she has played a headless woman in Domain of the Damned and Ms. Fix-It in Voodoo Dolly.

Junie Hoang is going to court against IMDb, which is owned by Amazon, because it reveals her age in her entry. She believes that could cost her work.

Betty White gets every role over 80.

But Junie Hoang's case could have implications beyond allegations of age prejudice, in Hollywood or any other business.

"Junie Hoang" is a stage name. The actress known as Junie Hoang was born Huong Hoang, and there are about 600 people by that name in the United States.

How would the IMDb know that Junie Hoang, the actress who has played in a film called Saturday Night Cleaver, is Huong Hoang, who was born July 16, 1971, in Saigon?

Did Amazon/IMDb, as the lawsuit suggests, mine their database of credit card information, bank history and perhaps public records — not to expose a criminal conspiracy or terrorist plot, but merely to come up with the birth date of an actress?

Still, what's so vital about an actor's birth date?

Actors and actresses, after all, are professional deluders. They dye their hair and wear false teeth for roles. Russell Crowe, from New Zealand, plays American cowpokes; and Meryl Streep, from New Jersey, plays the prime minister of Britain, a Danish writer, a Polish Holocaust survivor and more — and takes home gold statues for it.

Jonathan Turley at the George Washington Law School told us Junie Hoang's case "raises a legitimate complaint that is long overdue. The assumption of industry is that any information accessed by a third party has no expectation of privacy. That is not the assumption most citizens have."

So, when we order a book or buy socks on the Internet, do we know we may undo a latch on a lid that lets companies drill down for personal information? Not just age, but medications we take, magazines we may read or that that we once ordered Lolita or Das Kapital?

Professor Turley calls the millions of mounds of information companies compile while doing business, "the greatest potential threat to privacy in our history," and says Junie Hoang's case could help establish curbs and codes to protect privacy.

Junie Hoang played a headless woman, but she might wind up being a real figure in legal history.