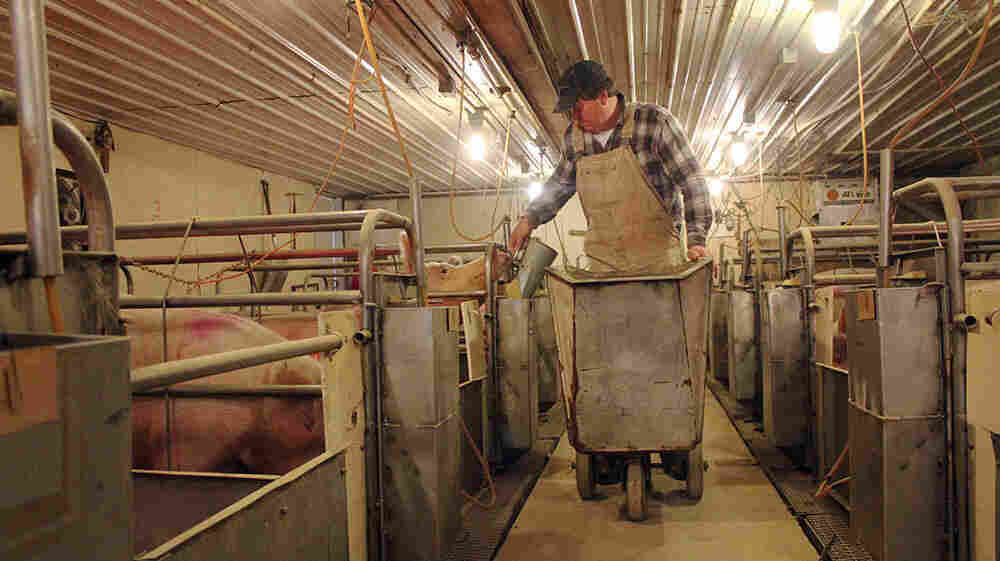 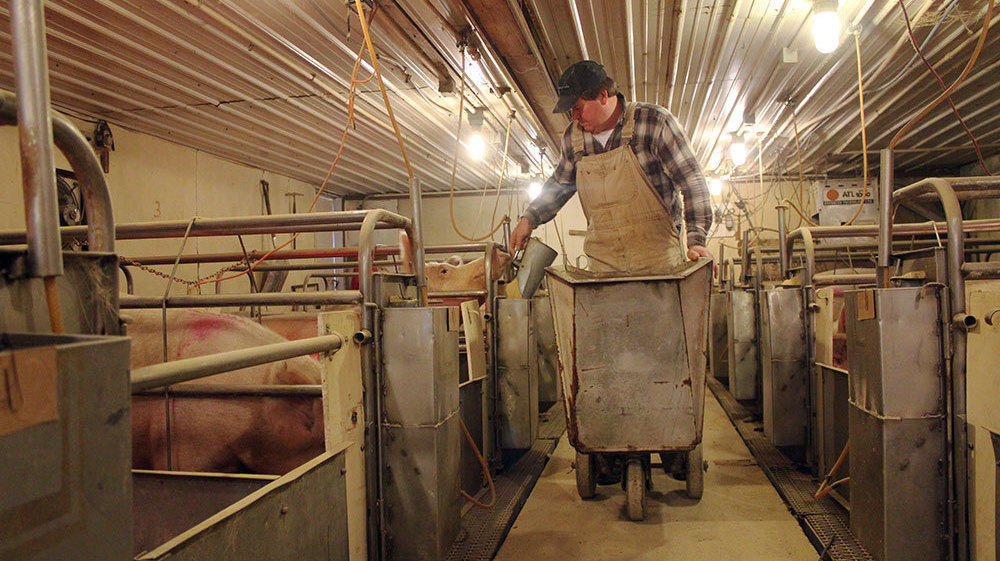 After a series of videos revealing apparent cruel treatment of farm animals went viral, Iowa has made it a crime for people to misrepresent themselves to gain access to a farm. The so-called "Ag-Gag" law targets undercover animal rights activists who secretly take videos. Farmers say they need the legal protection to block those trying to take down agriculture, but critics ask what the industry may be hiding.

'Farm To Fridge' By Mercy For Animals

WARNING: This link goes to a video that contains graphic images. 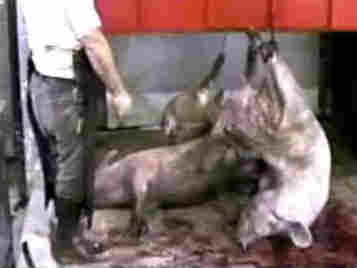 The impetus behind the law comes from videos like one by Mercy for Animals filmed by undercover activists who got jobs as farm workers.

"In the next few minutes, you'll be given an eye-opening look behind the closed doors of modern farms, hatcheries and slaughter plants," the video begins, "revealing the journey that animals make from farm to fridge." The images are graphic, showing the slaughter of chickens, pigs and cows. Mercy for Animals says that without national standards or regular inspections, the videos are the best way to alert the public about how animals are treated.

The new law makes it harder for animal rights groups to get the video in the first place. It's now a misdemeanor to lie on an application for a farm job with the intent of harming the business. It's punishable by up to one year in prison and a fine of up to $1,500. State Sen. Joe Seng, who sponsored the bill, says the severity is warranted.

"Agriculture is one of our most important industries," he says. "It's sort of a protection mechanism that's saying we do not want to put up with this in our state."

That's certainly the sentiment of Dave Struthers, a sixth-generation hog farmer in central Iowa. Struthers is tired of the activists' videos and the way they portray farming.

"We have a problem with a lot of undercover videos that go into livestock production facilities," he says, "looking for things that might be out of ordinary and, I think many times, fabricating things that are not happening on regular basis."

Struthers raises about 4,500 hogs a year, housed in multiple buildings, including special barns for sows.

"Mothers with their babies, they come in here about a week prior to giving birth," he explains. "Then they are here in these farrowing stalls where they give birth." 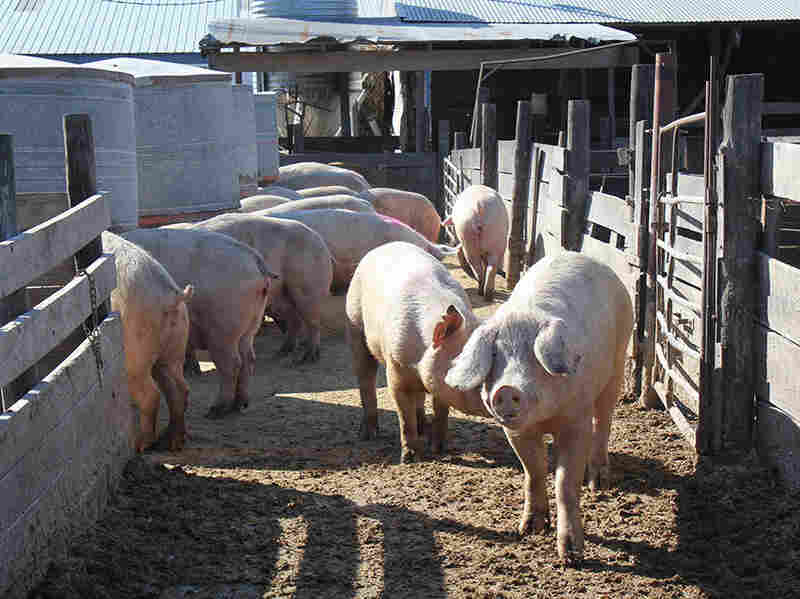 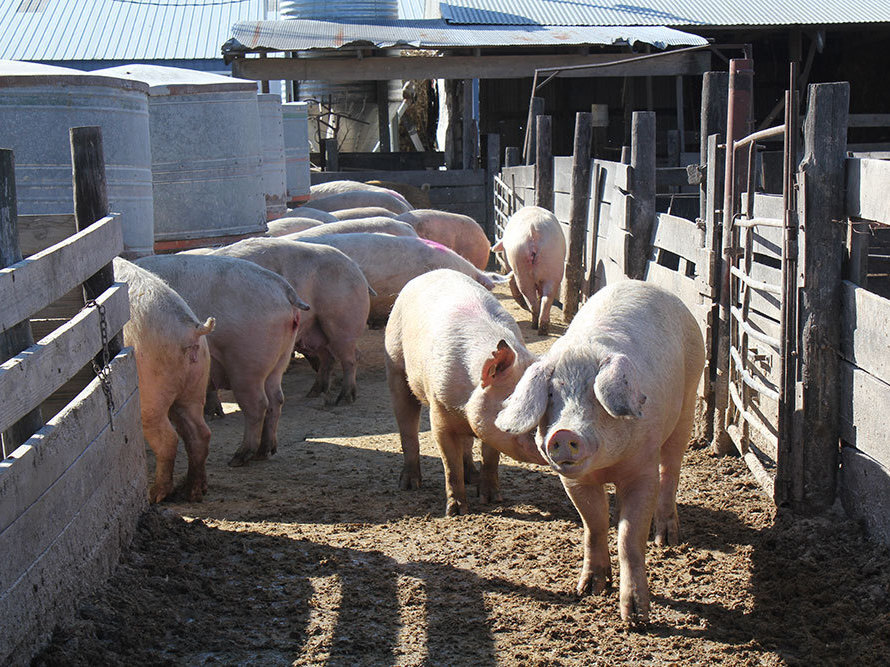 Struthers raises about 4,500 pigs for meat every year.

Struthers says one of his friend's farms was secretly filmed. The resulting video showed practices like castration and tail docking and tried to make it look inhumane, he says.

But those practices are not secret, Struthers emphasizes, they're legal — and standard in the industry.

Now in Iowa, if someone captures that treatment on video, he or she can be prosecuted. Constitutional law professor Mark Kende of Drake University says this could infringe on free speech rights. It could silence any worker who sees abuse and films it.

"He can be threatened, not just with being terminated, but he can be threatened with criminal prosecution," Kende says. "So this is really an extraordinary form of anti-whistle-blowing legislation — and really troubling in that respect."

Unlike last year's version of the bill, which never passed the Senate, this law doesn't make it illegal to take photos or video of farms. But if any farm employee releases a video, Kende says, "the prosecutors could say, 'Well, you know, that's what they ended up doing, so they must have had some inclination, maybe at some point.' But the bottom line is they're going to be prosecuted for doing what?" Kende says. "They're going to be prosecuted for their speech at that point."

Still, the law's backers say the legislation is constitutional because it doesn't stop people from reporting abuse.

"If you see abuse occurring, you have the right to videotape or to record and report that," Seng says.

The new law has only been on the books for a week. It will likely take someone being prosecuted to see how the law really works – and if it passes constitutional muster.

In the meantime, seven other states are considering similar legislation.