Accessibility links
A War With Iran: Rhetoric Or A Reality? Israel's former intelligence chief says Iran does not pose an existential threat, and while U.S. intelligence officials do not believe Iran intends to build a bomb the U.N.'s nuclear watchdog says Iran has accelerated its uranium enrichment program. Facing tough sanctions, Iran's leaders have agreed to resume direct talks on the country's nuclear program while the drumbeats of war continue. 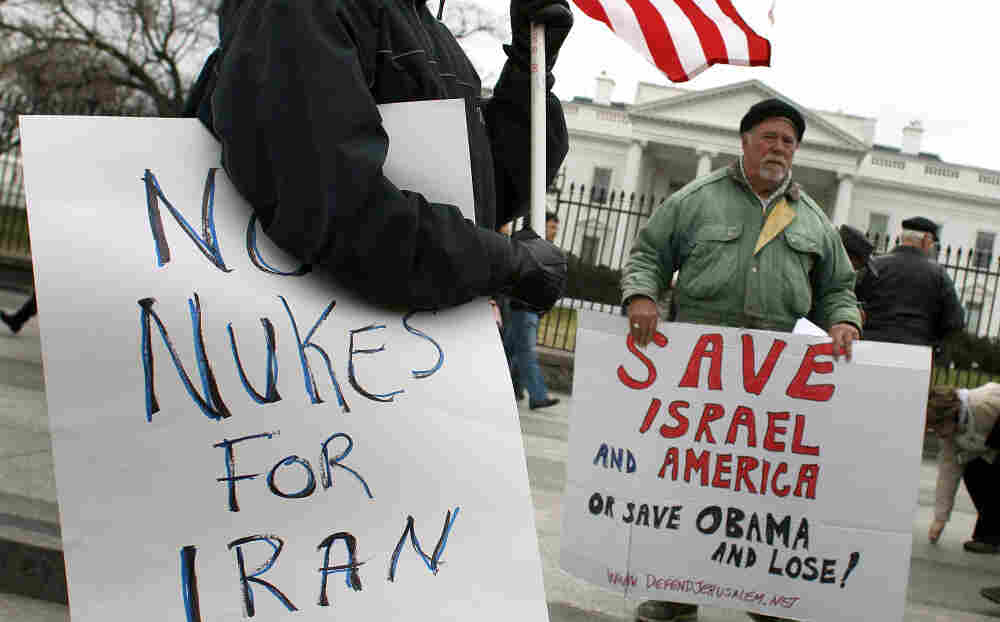 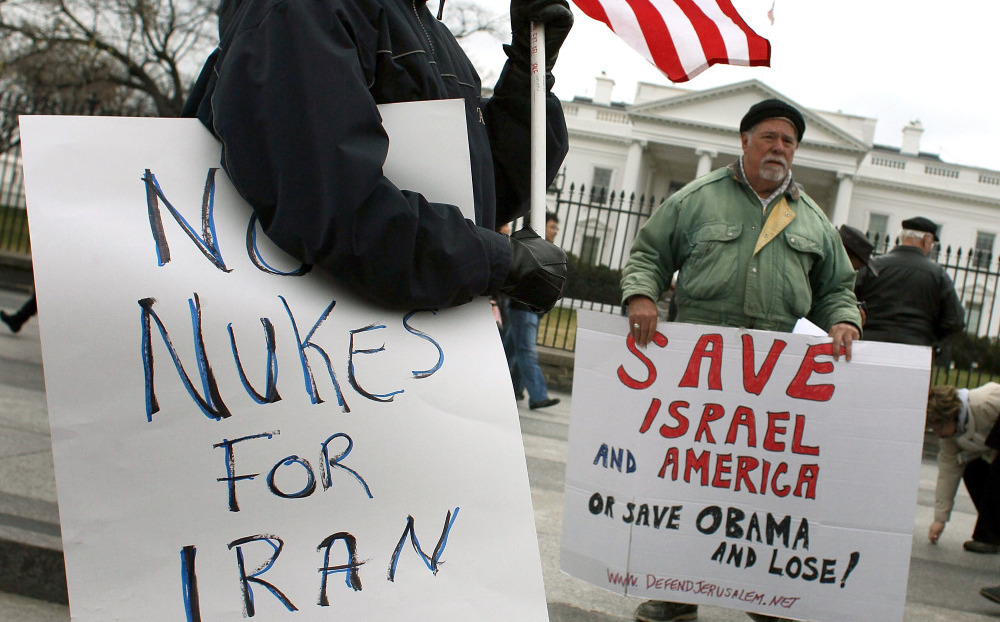 Bob Kunst (right) protests against a nuclear Iran in front of the White House on Monday.

In recent weeks and days, the divisions over how to deal with Iran and its nuclear program have sharpened. The only undisputed fact is that Iran is developing a nuclear energy program, but after that things get murky.

Israel and some European countries believe Iran is moving toward a nuclear weapons program, but U.S. intelligence agencies disagree. Israel argues that a nuclear-armed Iran poses an existential threat, and there's much speculation in the media about a possible Israeli attack on Iran's nuclear sites.

Are we heading toward a self-fulfilling prophecy or is some of it strategic bluster designed to spook Iran?

Several former and current leaders of Israel's military and intelligence establishment have come out to warn against an attack on Iran. Efraim Halevy led Israel's National Security Council and Mossad, Israel's national intelligence agency, from 1998 to 2002. He tells weekends on All Things Considered host Guy Raz that he doesn't believe there is an existential threat to Israel, but that there are threats the nation should not and cannot be expected to bare.

"If [the Iranians] achieve a nuclear military capability, they might be able to cause Israel most grievous harm," Halevy says. "This does not mean that Israel would cease to exist ... but this is not the kind of existence that we would like."

Halevy says he thinks sanctions are having the intended effect of making the Iranians feel they need to come to the table to avoid a confrontation.

In a recent op-ed piece for The Washington Post, Republican presidential candidate Mitt Romney argued that Iran is on course to acquire a nuclear weapon under President Obama, but that would not happen if Romney were elected president. Halevy says this kind of message could have a very bad — if not disastrous — effect on the situation.

"If I were an Iranian and I was hearing these statements ... my immediate reaction would be — we must go full speed ahead in order to achieve military capability before the U.S. presidential elections," he says. "This is something that should not be repeated."

Halevy says the president is taking a very tough line. Obama is clear in his intentions to prevent Iran from obtaining a nuclear weapon, he says.

"Can more be done? Yes. Would I like more to be done? Yes," he says. "But I think the fact that the Iranians are beginning to blink must be something that must be pursued."

Bomb Or No Bomb

One of the key questions is what Iran intends to do with their uranium enrichment program, and this is where the United Nations and the U.S. seem to disagree. U.S. intelligence says Iran has not made a decision to build a nuclear weapon, but New York Times national security correspondent Mark Mazzetti says the U.N.'s nuclear watchdog, the International Atomic Energy Agency, believes something else.

"Their body language and some of their public statements seem to lean in the direction that they think Iran is certainly proceeding in the direction of building a bomb," Mazzetti tells Raz.

Though it appears everyone is working from the same set of facts and drawing slightly different conclusions, Mazzetti says, the certainty with which U.S. officials have stated that they do not believe Iran has decided to build a nuclear weapon hints at some inside knowledge.

Some critics have attributed the caution to not wanting a repeat of the failure in Iraq in 2003, Mazzetti says.

The media plays a big role in making a war with Iran seem inevitable. Stephen Walt, a professor of international affairs at Harvard's Kennedy School of Government, says the media coverage in general has been simplistic and in some ways rather disappointing.

"Given that we're talking about issues of war and peace here where you would want the media to take enormous efforts to be tough, skeptical, probing and accurate," Walt says. "Instead they have contributed to a certain war frenzy that in some ways came out of nowhere."

Walt doesn't dispute the existence of the tension with Iran and the possibility of a conflict. But he does say the media has a responsibility to probe the motives behind some of the discussions about Iran and look more carefully at the claims being made.

Though it is still unknown whether the Iranians plan to develop a nuclear weapon, Walt says the question that should be considered is just how significant it would be if they did.

"People who are opposing military action now would argue that even if Iran did get a nuclear weapon, it is not a very militarily powerful state," he says. "Israel has a sizeable nuclear arsenal and could retaliate if it were attacked."

Walt doesn't believe the drumbeat of war with Iran in the media will lead to any sort of "self-fulfilling prophecy" and says that ultimately the decision for war is a conscious choice.

"We are talking about a preventive war, an unprovoked war," he says. "That's not a decision you get driven to by articles and op-eds. Ultimately, leaders in question have to make that choice and that means they always have the option of deciding to pursue a different course."