Accessibility links
Signs Of Recovery Emerge After A Long Downturn Millions of Americans are still searching for jobs or facing home foreclosures. But pockets of strength — found in energy, technology, manufacturing, autos, agriculture and elsewhere — are helping invigorate the broader economy. 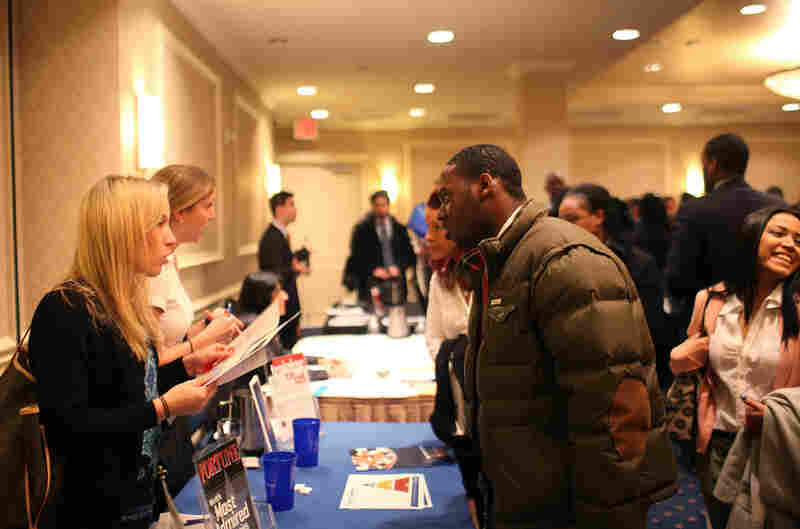 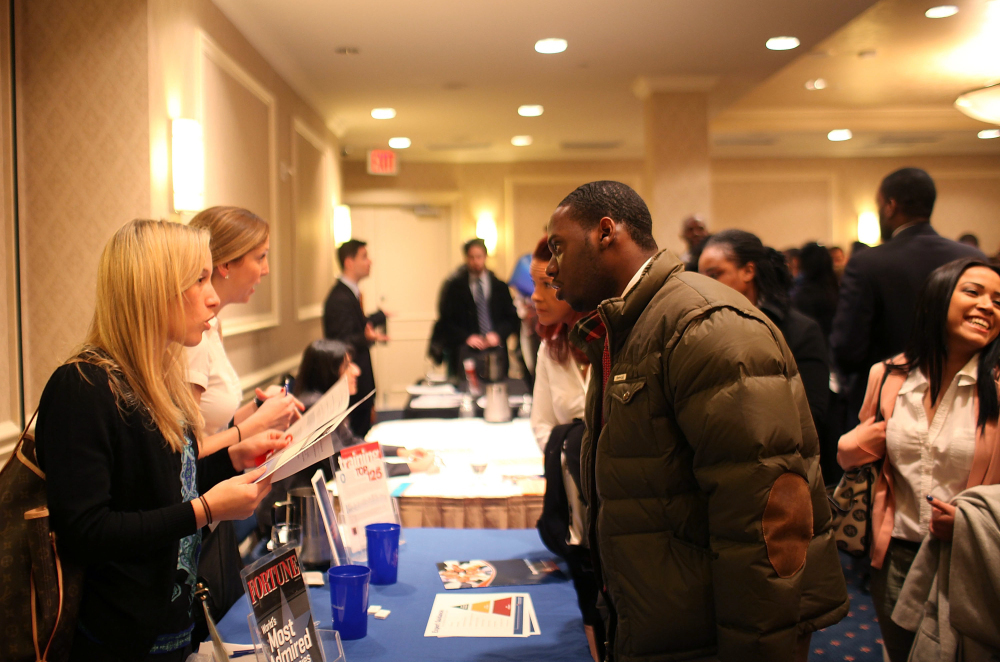 While parts of the U.S. economy struggle, other sectors are seeing growth. Here, job seekers talk with recruiters at a career fair in Manhattan last month.

Millions of Americans are still searching for jobs or facing home foreclosures. For them, the Great Recession drags on into its fifth year.

But for others, the U.S. economy is looking up.

Companies in certain sectors are buying equipment again and hiring workers. These pockets of strength — found in energy, technology, manufacturing, autos, agriculture and elsewhere — are helping invigorate the broader economy.

"A virtuous circle may be building where employment, incomes and consumer spending move up together," IHS Global Insight's chief U.S. economist Nigel Gault wrote in a recent assessment of the economy.

The evidence of better times is all around. So far this year, employers have created about a half-million jobs, sending the unemployment rate down to 8.3 percent from a peak of 10 percent in October 2009.

The economic confidence of corporate officers and the GDP have fluctuated, but both are improving:

And it's not just consumers who are feeling more confident. Business executives are smiling more, too.

Last week, the American Institute of Certified Public Accountants released its quarterly Economic Outlook Survey, which polls chief financial officers, controllers and other accountants in senior management. Its "optimism index" shot from 25 points in the third quarter of 2011 to 69 in the first quarter of 2012. On the zero-to-100 scale, anything above 50 is positive.

"Optimists now outnumber pessimists on the U.S. economy by an almost 2-to-1 margin, which is a striking change from six months ago," AICPA Vice President Carol Scott said. "While a substantial number of respondents remain neutral, we're seeing a clear shift toward a more positive outlook for the coming year."

Stock investors have been riding that wave of optimism, as well. The Dow Jones industrial average is up nearly 25 percent since October.

To be sure, the recovery is still wildly uneven. More than 12 million people continue to seek work. U.S. home prices are down 34 percent from their peak, wiping out a decade of appreciation. Rising gasoline and jet fuel prices threaten to derail hopes for profits in the travel industry.

Some industries remain deeply depressed. If you work for a newspaper or a homebuilder, this does not feel like a recovery.

The economy also faces threats from abroad. The confrontation between the West and Iran, and the European debt crisis, could trigger trouble for the U.S. economy.

The U.S. unemployment rate has been receding from its highest point, reached in late 2009.

But despite these reasons for worry, large swaths of the economy are undeniably looking up. To see how the recovery is transforming some lives, NPR sent reporters out to look around the country. They found many people excited about the future.

"Yeah, I feel very lucky, and very glad I chose engineering — and specifically petroleum engineering," Chris Enger told NPR. In May, Enger will graduate from the Colorado School of Mines — and he already has a job lined up with EOG Resources, a Texas-based oil and gas company.

Reporters found similar stories about optimism from the farm to the factory to the high-tech office. These stories will be airing Monday through Wednesday on NPR's Morning Edition and All Things Considered.