Accessibility links
Who Will Win Over America's Latino Voters? Winning the community is becoming increasingly important for political candidates. A recent poll of Latino voters showed President Obama well ahead of his Republican rivals, but the story is not over for the GOP. In 2004, George W. Bush received 44 percent of the Latino vote, and one Republican strategist thinks they can do it again. 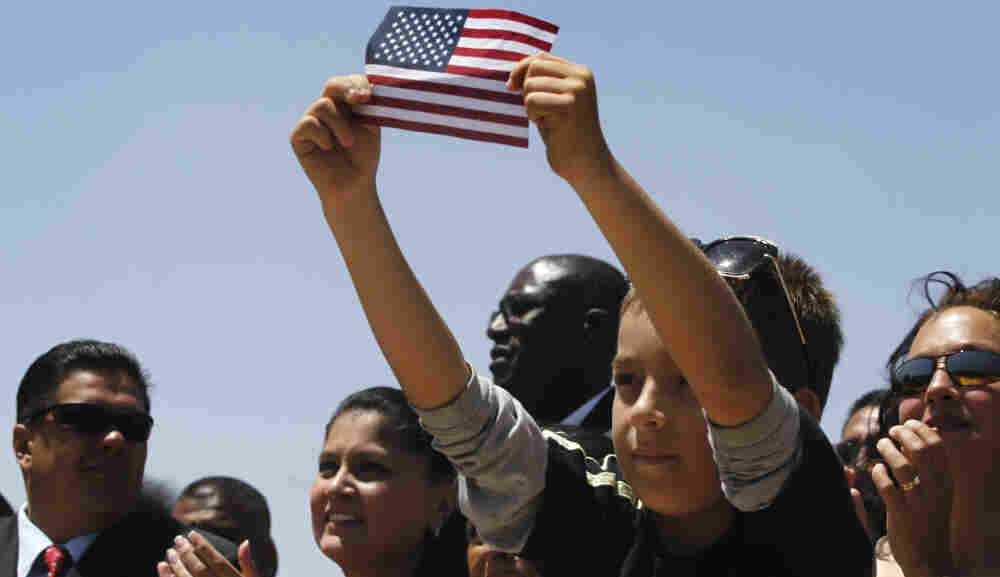 Audience members listen to President Obama talk about immigration in 2011 in El Paso, Texas. Hispanic voters face a choice this election season: continue to support Obama despite being disproportionately hurt by the economic downturn, or turn to Republicans at a time when many GOP presidential hopefuls have taken a hard line on immigration. Charles Dharapak/AP hide caption 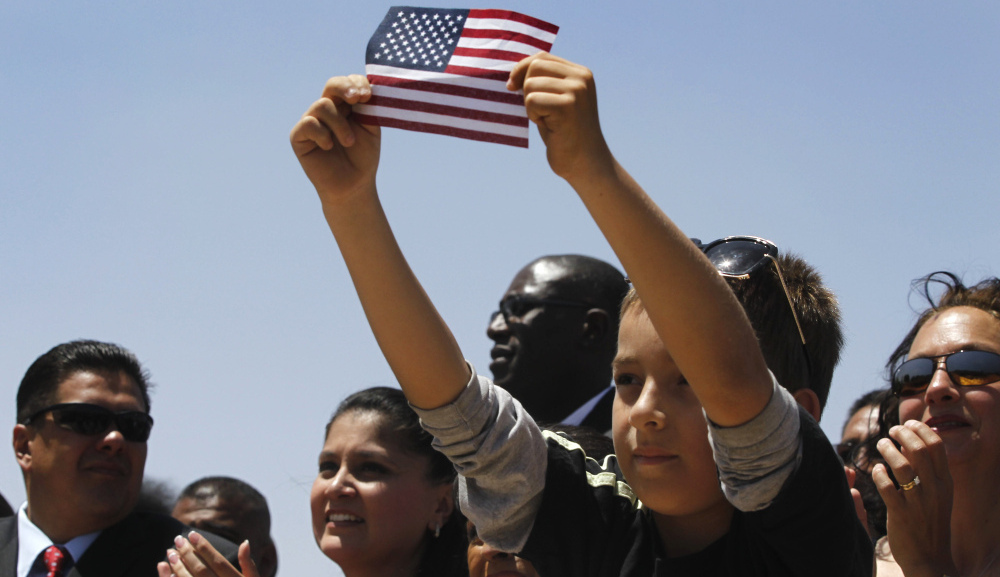 Audience members listen to President Obama talk about immigration in 2011 in El Paso, Texas. Hispanic voters face a choice this election season: continue to support Obama despite being disproportionately hurt by the economic downturn, or turn to Republicans at a time when many GOP presidential hopefuls have taken a hard line on immigration.

There's a man in Phoenix with a political playbook that has become valuable. So valuable, the Obama campaign believes it could help clinch the president's re-election.

"I decided early on that this campaign would be a campaign for social behavioral change," Valenzuela tells weekends on All Things Considered host Guy Raz. "To get people active, register to vote, realize the power of a vote and to get them to cast that vote."

Latino voters continue to shape American politics, and this election season should see candidates on both sides courting the support of the fast-growing group. In Valenzuela's case, he did it the old-fashioned way. He recruited a group of local university students who knocked on 72,000 doors.

One of Valenzuela's student volunteers was Vania Guevara, a first-generation American whose parents are from El Salvador.

Guevara says that the student volunteers were able to tap into the frustration many folks in the community felt over Arizona's tough anti-immigration laws.

"A lot of it was SB 1070 [anti-illegal immigration act] and what [Maricopa County Sheriff Joe Arpaio] was doing in our communities that really triggered it," Guevara tells Raz. "Also, tuition increases, and a lot of our DREAM Act students basically got kicked out of school because of a proposition that increased tuition significantly."

Critics say Arizona's new immigration law encourages profiling. Republican Sheriff Arpaio's office was cited by the Justice Department for "pervasive culture of discriminatory bias against Latinos." And the DREAM Act, which proposes paths to citizenship for some children of immigrants who were brought to the U.S. illegally, is largely opposed by Republican lawmakers.

The issues Guevara mentions — among others — mobilized so many people in western Phoenix that it eventually inspired a recent Time magazine cover story.

"In the end, we witnessed the greatest grass-roots effort in the history of Phoenix politics," Valenzuela says.

The success prompted the Obama campaign to send an operative to Phoenix to learn more about Valenzeula's game plan and how to apply it nationwide; Valenzuela says he believes Arizona is in play this election.

"The Latino voter turnout increased by nearly 500 percent in one particular district," he says, "but over the city of Phoenix, which is the sixth-largest city in the country, mind you, it actually increased by over 300 percent across the board."

Latinos like the ones who voted in Phoenix — people who had never voted before — could turn out across the country in such numbers this year that they might hold the power to swing the presidential election.

"When I hear some of the policies and the rhetoric that's coming out of the GOP debates, I hear very little other than anti-immigration reform," Valenzuela says. "And those things bother me, personally, and I know that I'm not alone."

More than half of U.S. population growth today is being fueled by the Latino community. The reason this is so important to presidential politics is because of where that population growth is happening. In addition to Arizona, states that have often voted Republican like Florida, Virginia and Colorado, have all seen growth in their Latino populations. But demographer Ruy Teixeira with the Center for American Progress says that could soon swing the other way.

"If President Obama polls 75 percent of the minority vote, he can lose white voters by huge margins and still win the election, including white working-class voters," Teixeira says.

Teixeira says that if Obama can get the margin that he got in 2008 from Latino voters, he would get that 75 percent of the minority vote. While that that doesn't exactly make Obama bulletproof, Teixeris says, it certainly gets him a long way toward being re-elected.

The long, competitive Republican primary is part of the reason more Latinos are turning away from the GOP, Teixeira says. He says Latino voters have taken notice of what's been said at the GOP debates on issues important to them.

"They're all against the DREAM Act; they're all against in-state tuition ... believe me, people notice and especially Latino voters notice," he says. "It just reinforces this image of the Republican Party as being unwelcoming to immigrants."

What Can Republicans Do?

The same Fox News poll found that 60 percent of likely Latino voters believe the Democrats will help them achieve the American dream, while only 10 percent said the same for Republicans.

Whit Ayres, the founder and president of North Star Opinion Research, a national public opinion research firm, is a Republican consultant who counts many of the party's leaders as clients. He agrees that doing better among Latino voters is one of the great challenges for Republicans, but he thinks the party can do far better than the poll suggests.

"In his re-election campaign in 2004, President Bush received 44 percent of the Latino vote nationwide," Ayres says. "So we know that a candidate who reaches out and aggressively courts Latino voters can bring them into the Republican fold."

Ayres says the state of economy and jobs is the most important issue in the Latino community today, and he believes focusing on those issues can draw in Latino voters.

"To present a picture of the Republican nominee as better for economic growth will mean that Republicans will do better in Latino communities," he says.

Ayres says Latino voters are on track to become the No. 1 swing voter group in the country, and the seriousness of winning that vote for the GOP cannot be understated. What are the consequences for not taking it seriously?

In the audio of this story, we incorrectly say that DeeDee Garcia Blase expects to vote for President Obama in this fall's election. In fact, Garcia Blase is undecided.