Accessibility links
Afghan Shootings Could Complicate U.S. Mission The shooting of 16 Afghan civilians on Sunday is not likely to alter U.S. and NATO strategy in that country. But the incident will exacerbate tensions and could make it more difficult for the U.S. to work closely with the Afghans. 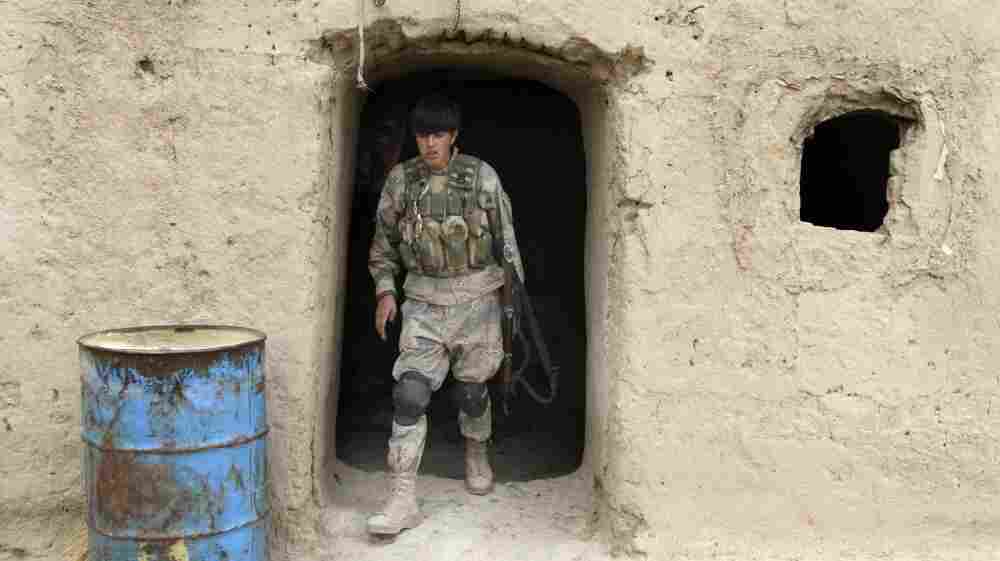 The deaths of Afghan civilians, who were allegedly shot by an American soldier, could make the U.S. mission even harder. Here, an Afghan soldier leaves a home where civilians were killed Sunday in the southern province of Kandahar. AP hide caption 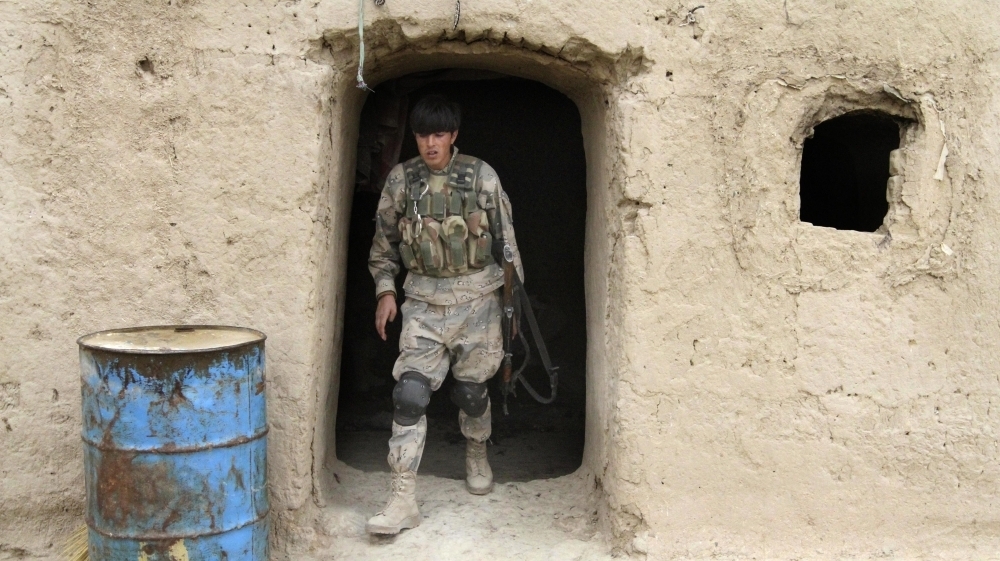 The deaths of Afghan civilians, who were allegedly shot by an American soldier, could make the U.S. mission even harder. Here, an Afghan soldier leaves a home where civilians were killed Sunday in the southern province of Kandahar.

It's unlikely that the killing of 16 Afghan civilians on Sunday, allegedly by a U.S. Army staff sergeant, will drastically alter the course of the war.

U.S. and NATO strategy calls for a sizable contingent of international troops to stay in Afghanistan until 2014, with residual support after that. That timetable is unlikely to change.

But the task U.S. forces face in trying to stabilize the country could well be made more difficult by the shootings.

"No one is going to accelerate the timetable for departure," says Rajan Menon, an international relations professor at Lehigh University. "The real question is what the next two years are going to look like."

The recent shootings come on the heels of other events that have offended and upset Afghans, including the inadvertent burning of copies of the Quran by American soldiers in February and video footage of Marines urinating on corpses that emerged in January.

President Obama has expressed regret for all the incidents, but his administration has shown no sign that it will change policy as a result of the most recent shootings.

"Without underestimating the magnitude of this event, we'll maintain a course that makes sense," says Rick "Ozzie" Nelson, a senior fellow at the Center for Strategic and International Studies. "We have to keep in mind the strategic implications of this [war]."

Still, there are numerous factors the administration will have to weigh as it aims to bring the war, which has lasted more than a decade, to its eventual conclusion. Here are a few:

Hearts And Minds In Afghanistan

The shootings are bound to have an ill effect on Afghan opinion about the role of U.S. forces. The killings were not a military action but are bound to be interpreted as part of the larger costs civilians bear as the result of the war, Menon says.

No one is going to accelerate the timetable for [the U.S.] departure. The real question is what the next two years are going to look like.

"Just about every commander we've had there has said this is fundamentally about winning the confidence of the Afghan people," he says. "When you have incident after incident, you can do that only so many times without wearing out the Afghan public's goodwill."

There are reports of growing anger toward the U.S. in the wake of Sunday's shootings. The full extent of blowback from the incident may not be known for a couple of days.

But once the initial heat of protests and riots cooled off following the Quran-burnings, most Afghans realized that the presence of U.S. forces has helped to promote security, says Stephen Biddle, a senior fellow for defense policy at the Council on Foreign Relations.

"They don't like this humiliating foreign presence — who would?" Biddle says. "But most of them view this as the only thing standing between them and the Taliban and civil war."

A Washington Post-ABC News Poll released Sunday showed that 60 percent of Americans believe the war in Afghanistan is not worth the cost.

American public opinion about the war has been slowly souring for some years now. Public support in the U.S. could go further south if there are reprisals — particularly if Afghan security forces seek revenge against American troops, Menon says.

"Members of Afghan security forces have murdered far more of their American mentors than the number of Afghan civilians this guy killed," says Ann Marlow, a visiting fellow at the Hudson Institute.

But even if most Americans oppose the continuing war, they have mostly been quiet about it. If you ask people their opinion, they'll say we should leave, Biddle says, but they're quiet about acting on such beliefs, in terms of public protests.

Afghanistan has hardly been mentioned in this year's presidential campaign, just as it was largely absent from the agenda during the midterm elections of 2010. That leaves Obama with more of a free hand to follow the course he thinks best.

"Afghanistan only gets back on the front pages when something unfortunate like the most recent incident happens," McGovern says.

No one expects that the U.S. will leave behind a model democracy. But helping the Afghans establish security and police forces that can secure the borders and offer some semblance of security internally is going to take some more time, supporters of Obama's strategy contend.

U.S. forces have evicted the Taliban from a number of strongholds and continue to pursue the group's leaders.

"If they try to wait us out until 2016 — that's a long time to wait, and in the meantime we're killing off lots of their leaders," says Biddle, the CFR defense analyst.

But Sunday's killings of the Afghan civilians come at a time when the U.S. is still trying to negotiate a strategic agreement with Afghanistan about its role past the targeted withdrawal date of 2014. Afghans were already unhappy about night raids and air attacks that have cost civilian lives.

"It can make it more difficult for the U.S. and the Afghans to come to terms with the strategic partnerships, because it increases the amount of political will required on both sides," says Jonathan Schroden, a senior research strategist at CNA, which provides analysis to the Pentagon.

The most important strategic consideration for the U.S., Biddle says, remains the effect a precipitous withdrawal could have on the stability of Pakistan. U.S-Pakistani relations have been going downhill ever since the killing of al-Qaida leader Osama bin Laden in that country last May.

"The administration's exit strategy at the moment centers on hoping Pakistan doesn't destabilize into chaos," he says.

The Hunt For Al-Qaida

There continues to be debate about whether the American success in killing al-Qaida leaders and forcing them from Afghanistan is proof that the U.S. needs to stay the course. Some say it's a reason to declare victory and get out.

Al-Qaida has been deprived of the safe haven in Afghanistan from which it launched the terrorist attacks of Sept. 11, 2001. But it has found other states from which to operate. The U.S. is not going to put 100,000 troops on the ground in all of them.

"Saying that if we leave Afghanistan, it will immediately decline and go back to where it was in 2001 ignores a lot of investment that the U.S. and the international community have made in Afghanistan, as well as the Afghan people themselves," says Nelson, the CSIS analyst.

Nelson argues that Afghans will not accept a return to the levels of violence and oppression that the Taliban unleashed in the late 1990s.

But given the group's resilience after more than a decade of war and its ties to terrorist groups across the porous border with Pakistan, some argue that's a risky gamble to take.

"It's not just al-Qaida," says Schroden, the CNA scientist, who is just back from a three-month stay in Afghanistan.

"There are a host of other extremist groups," he says. "We've weakened those groups, but we haven't been able to defeat them to the point where they can't regroup."