Accessibility links
Hey, Y'all: Why Romney Might Just Win In The South GOP presidential candidate Mitt Romney's on-the-trail efforts in Mississippi and Alabama may look awkward, but his money and organization could translate to wins on Tuesday.

Hey, Y'all: Why Romney Might Just Win In The South

Hey, Y'all: Why Romney Might Just Win In The South 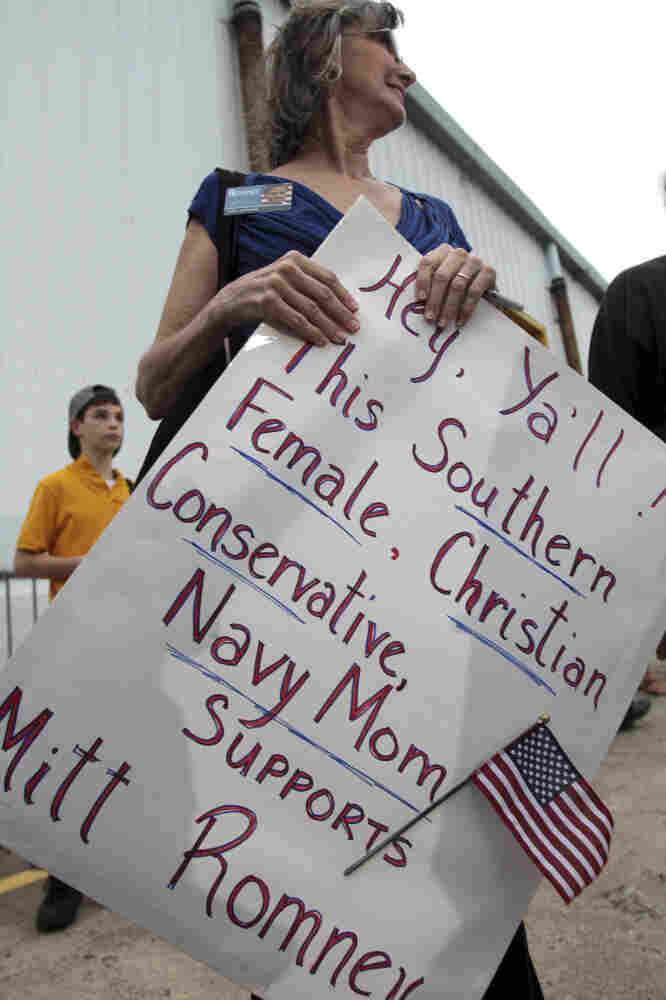 Carla Castorina of Hurley, Miss., holds a sign supporting former Massachusetts Gov. Mitt Romney after a campaign rally at the Port of Pascagoula in Pascagoula, Miss., on March 8. Polls show a tight race in the state, which holds its primary on Tuesday. Dan Anderson /Reuters/Landov hide caption

Mitt Romney's stilted efforts to relate to Dixie voters by tossing off a few "y'alls" and references to grits have been roundly mocked as awkward pandering.

And rightfully so, says political scientist Marvin King, who cringed at the GOP candidate's sprinkling of vernacular and Southern stereotypes into his patter during appearances in Mississippi and Alabama. The two states hold their Republican presidential primaries Tuesday.

"You can tell Romney wasn't expecting to campaign down here, and it shows," says King of the University of Mississippi.

But despite Romney's vaunted lack of on-the-trail naturalness, no matter the geographic region, he appears poised to do better than anyone might have expected in conservative territory seen as much friendlier to his GOP opponents.

"It would not surprise me if Romney took first here, and I think Mississippi and Alabama will go with the same person," says Frank Corder, a council member in Pascagoula, Miss., and writer for the state politics blog Y'all Politics.

"And even if he gets second both here and in Alabama — that would speak volumes for his campaign," Corder says.

Romney himself predicted an Alabama victory during his only campaign appearance of the day Monday, telling a crowd in Mobile that "we're going to win tomorrow."

The latest polls show the former Massachusetts governor locked in a battle supreme in both states with religious conservative Rick Santorum, whose cultural views match up with many voters in the region, and Newt Gingrich, the former congressman from Georgia who has fashioned himself as the Southern candidate.

Gingrich, a Pennsylvania native who served two decades as a Georgia representative, has staked the future of his slumping campaign on a strong Tuesday performance in the South.

If Romney wins, it suggests a strength few thought he could show down South.

Santorum, a staunch Catholic, is attempting to capitalize on his appeal with social conservatives to build on his recent successes and quash Gingrich's hoped-for Southern revival.

Both have scheduled campaign appearances Monday in Alabama and Mississippi. The other remaining GOP presidential candidate, Texas Rep. Ron Paul, has no events scheduled.

The Tea Party in Mississippi, once strongly behind Paul, has since frayed, Corder says, its support now split among the remaining candidates.

A similar Tea Party split appears to be playing out in Alabama, where Paul's isolationism and "lack of hawkishness on military issues [don't] ... wash with voters," says Steve Borrelli at the University of Alabama in Tuscaloosa.

The most recent polls out of Mississippi, which will award 40 delegates proportional to the vote, show Gingrich and Romney trading the lead, with Santorum running nearly as strong as both.

The numbers are similar in Alabama. There, Romney and Gingrich have also swapped the lead, but Santorum is also positioned to win, riding on his appeal to evangelical voters who dominated turnout in the 2008 primaries in both states.

Alabama will allot 50 delegates who also will be distributed proportionally.

The polls show that Paul is capturing the support of between 6 and 8 percent of those surveyed in both states.

With no defining moment for the candidates in recent days (while Santorum was winning the Kansas caucuses over the weekend, Romney came out on top in Wyoming, Guam and the Northern Marianas), Romney's on-the-ground organization may make the difference.

"Even though he doesn't have the mass appeal, his organization and his money will do a good job in getting his faithful to come out," says the University of Alabama's Borrelli.

"And except for strong opposition to President Obama, there's no galvanizing issue here," he says — or at least one on which there's some air between the positions of the top three candidates.

Corder agrees that GOP voters "want to rally around a candidate who can beat Obama."

Romney is likely to run strongly in wealthy areas of Alabama, where a more traditional Republicanism remains embedded.

"Even though Alabama is a demographically poorer state, there are pockets of extreme wealth," Borrelli says. "They are the most likely to vote, and are a bigger percentage than people would imagine."

But according to the most recent U.S. census, Mississippi has the distinction of being the nation's poorest state, with a median income of $36,850 and a poverty rate that, at 21.3 percent, is the nation's highest.

More On The GOP Race

Even if his wealthy base is more scarce, Romney's racked up big Mississippi endorsements, including one from Gov. Phil Bryant. And Romney's campaign and Restore Our Future, the superPAC supporting him, have reportedly spread out close to $2 million for advertising in both states.

"Officials endorsing him are looking more toward him being electable, and they're trying to balance their values with that," says Corder, the Pascagoula council member, who says the airways have been packed with anti-Santorum spots that attack the former Pennsylvania senator as an unprepared Washington insider who lost his last election by a historic margin.

Historians note that Alabama's first big break with the Democratic Party occurred when it nominated Al Smith, a Catholic, for president in 1928.

Now? "The Catholic church is growing in Alabama, and there's a kinship between evangelical Christians and Catholics," Borelli says. "They've been on the same side of so many issues in the last 20 to 30 years."

Though Santorum has not been successful in dominating the Catholic vote in previous contests, his religion in the present-day South is more plus than hindrance. How Romney's Mormonism will affect Tuesday's vote is less certain.

"Relating to the average person is a bigger liability for him than his religion," Borrelli says, even though the concept of holy texts used by Mormons in addition to the Bible is anathema to many fundamentalist voters.

Alabama and Mississippi present a very conservative test, says King of the University of Mississippi, and puts those two states in the unusual position of affecting the race. (Usually, their primaries come too far into the nominating race to have much impact.)

If Gingrich can't win Tuesday, he can't win anywhere, King says. If Romney wins, it suggests a strength few thought he could show down South. And Santorum would "consider it a victory if Gingrich just quits," he said.

And asking for those votes in sometimes very awkward ways.