Accessibility links
Rethinking, Not Just Rebuilding, Japan's Northeast The northeast coast of Japan has an older population, fewer jobs and more tsunamis than the rest of the country. The regional economy had been declining long before last year's disaster. Many people say in order to survive, the region needs to remake itself. 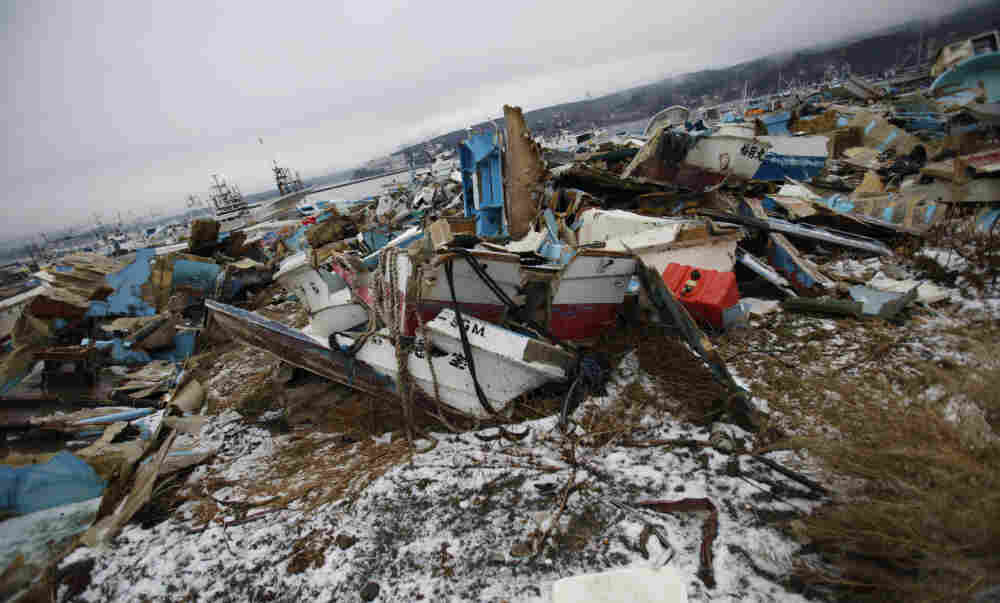 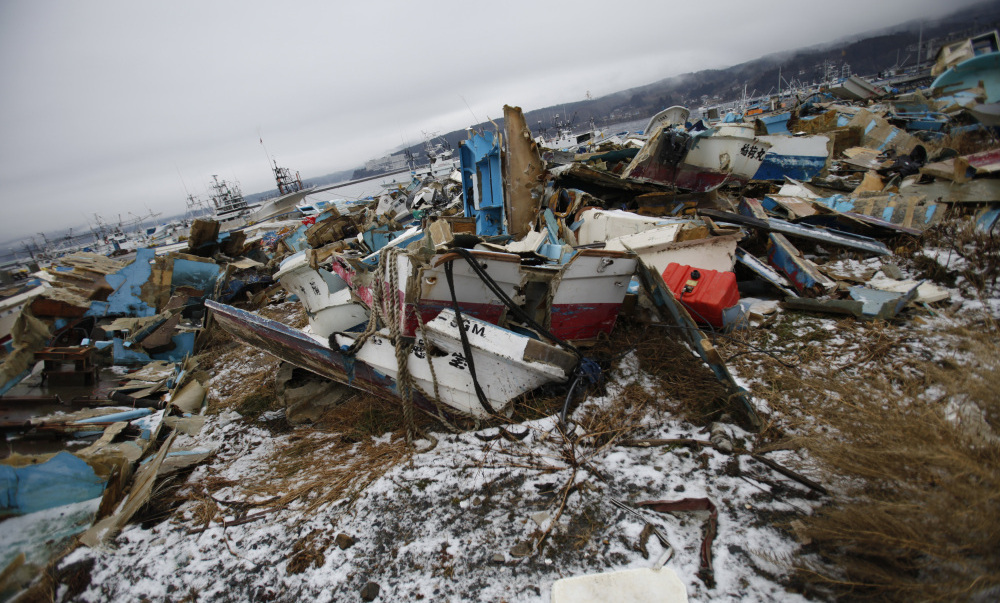 With a fierce yell and a resounding thwack, 13-year-old Japanese student Nanami Usui brings her bamboo sword down on her opponent.

By practicing Kendo, or Japanese swordsmanship, Usui is one of several students in the town of Minamisanriku who are rebuilding their confidence after last year's tsunami washed away their homes and shattered their hometown in the country's northeast.

My father's generation rebuilt the town just the way it was before. But it won't be that way this time. I believe this town has to be reborn.

Usui says she dreams of being a police officer, but she doesn't know yet where she wants to live and work.

"Most high school students here have dreams about their future careers," she says, as she prepares to don her helmet and breastplate. "I suppose if you want to become a fisherman you can stay here, but if you want to do anything else, you have to leave this town."

This is the crucial problem faced by Japan's northeast, where the economy and population had been declining long before the disaster, and the region not only needs rebuilding, it may also need rethinking.

Over the weekend, Prime Minister Yoshihiko Noda promised to honor the nearly 20,000 people who died in the disaster by helping to rebuild the region.

Harsh winds and waves lash Minamisanriku's sparsely settled coastline. Far from Tokyo's neon-lit cityscapes and Kyoto's serene gardens, this is a part of Japan you seldom hear about. It has an older population, fewer jobs, more suicides, and more tsunamis than the rest of the country.

Nobutaka Chiba is a town assemblyman, and Usui's kendo teacher. He notes that the last big tsunami in 1960 largely wiped Minamisanriku off the map.

"My father's generation rebuilt the town just the way it was before," he says, speaking in the print shop he operates. "But it won't be that way this time. I believe this town has to be reborn." 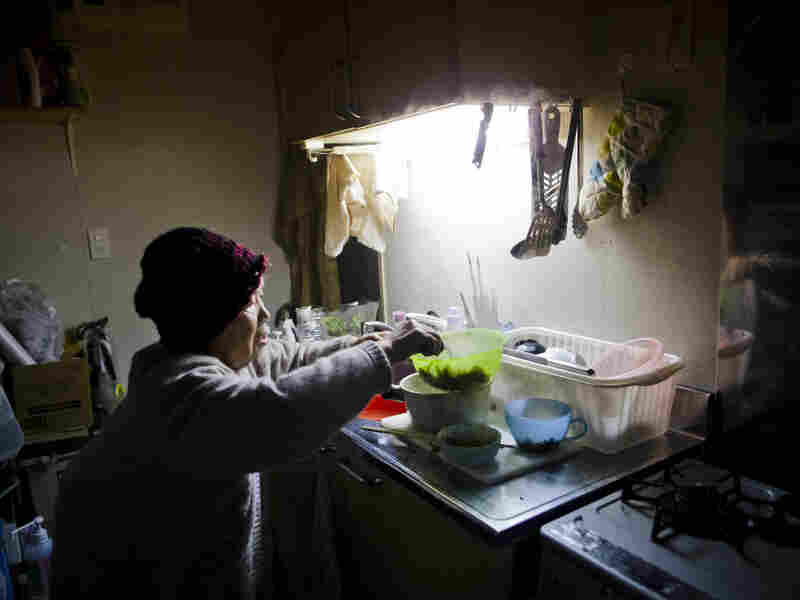 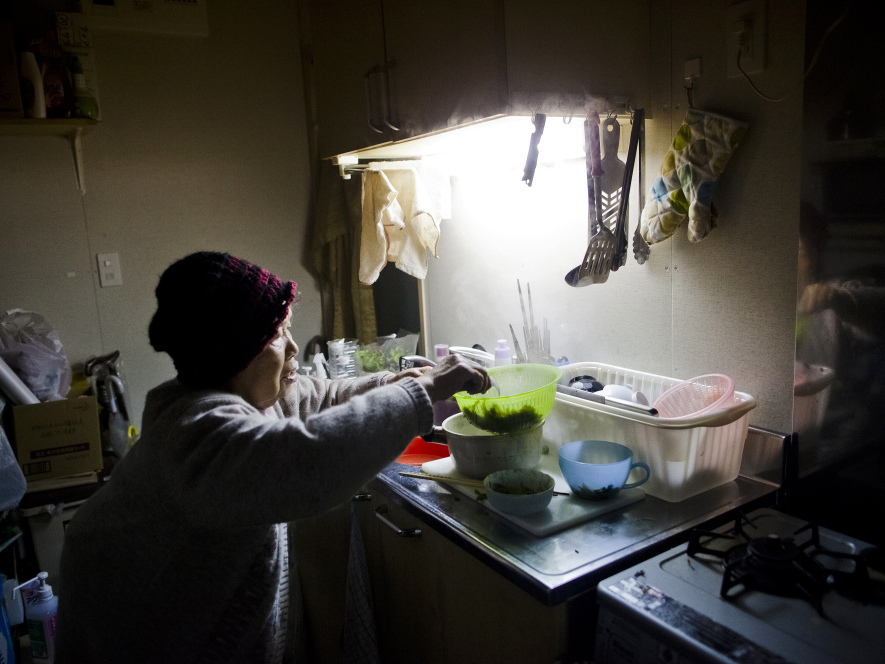 This time, the government plans to erect a giant sea wall to protect the town's commercial area, and move residents up into the hills. It will take a decade to complete. Right now, smashed boats, crumpled cars and mountains of debris still await removal. The entire northeastern seaboard region has only processed about 6 percent of the massive amount of debris left by the tsunami.

"It may appear to be going slowly and this may worry some residents," concedes Kiyotaka Miura, the local official in charge of planning reconstruction. "But we're definitely making progress with the relocation. It will take time and we hope residents will be patient."

It took the central government eight months to come up with a reconstruction budget and eleven months to create an agency to administer it.

Out of a population of more than 18,000 in Minamisanriku, the tsunami killed about a thousand; 2,000 were given temporary shelter elsewhere, and another thousand simply packed up left for good.

Taxi driver Toshiei Sasaki, who is living in temporary housing, says his patience is wearing thin.

"The temporary housing is only supposed to be used for two years, and one year has already passed," he complains. "More and more people are leaving this town every day. If they don't speed up the reconstruction, we'll lose our population." 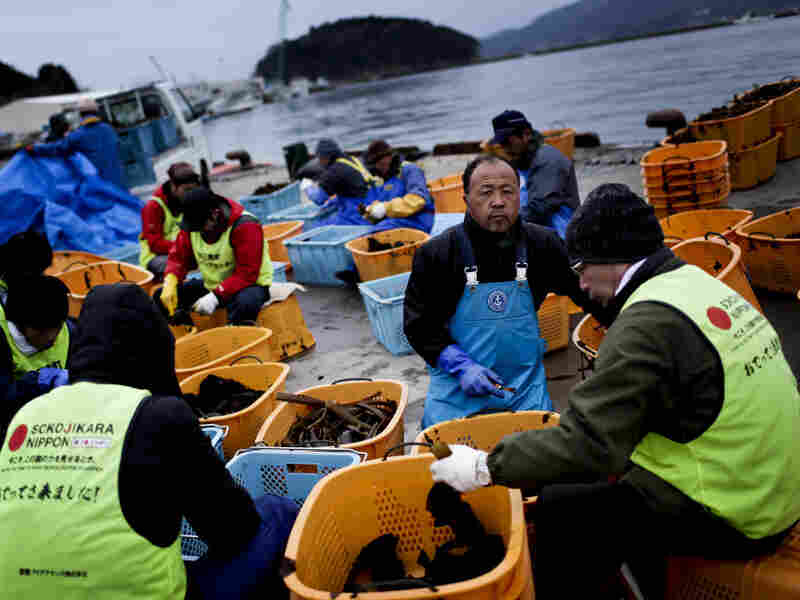 Volunteers assist workers who are slicing and packing seaweed at a temporary processing yard set up on the Minamisanriku harborfront, March 8, 2012. Chris McGrath/Getty Images hide caption

Meanwhile, local land prices have collapsed and tax revenues have dried up.

At the local fish market, buyers peruse a few boxes of seaweed, as rough seas have decreased the catch of fish. Tomoaki Saito, with the local fishermen's union, says the tsunami wiped out 90 percent of local fishing boats.

"Some older fishermen have just given up," he sighs. "Fishing on your own is not easy, especially without equipment. So we have to collectivize. That way, we can get some support from the government."

The fishermen now survive by handing the collective's revenues to the government, which then pays them a salary.

Since the earthquake, architects, economists and bureaucrats have suggested some futuristic plans for a new northeast coast with high-tech industries, alternative energy power grids and elevated, tsunami-proof coastal towns.

But Tsunehide Chino, an assistant professor at Iwate Prefectural University, says these ideas are impractical and northeasterners should stick to government-subsidized fishing and farming.

"What Tokyo and the central government are trying to do is transplant industry to generate income and enrich the northeast," he explains. "I think that's the wrong way. Northeasterners should still make their living from natural resources, just as they have been doing."

Chino says that Tokyoites mostly think of the northeast as a place that gave them tasty fish, migrant laborers and cheap electricity from the Fukushima nuclear plant - that is, until three reactors melted down after last year's tsunami. It's that kind of attitude that Japan needs to rethink, Chino says, so that northeasterners get a better economic deal and more recognition for their contributions to the nation.