Accessibility links
New Republic: Is The South Too Much For The GOP? Mississippi and Alabama are holding primaries today. Alec MacGillis of The New Republic argues that the GOP Presidential candidates may be conservative but they are disconnected from Southern voters.

New Republic: Is The South Too Much For The GOP?

New Republic: Is The South Too Much For The GOP? 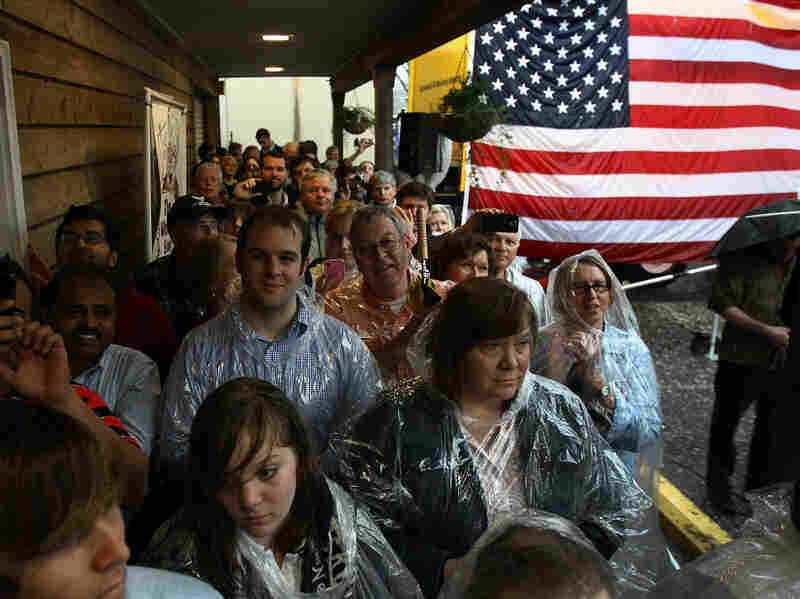 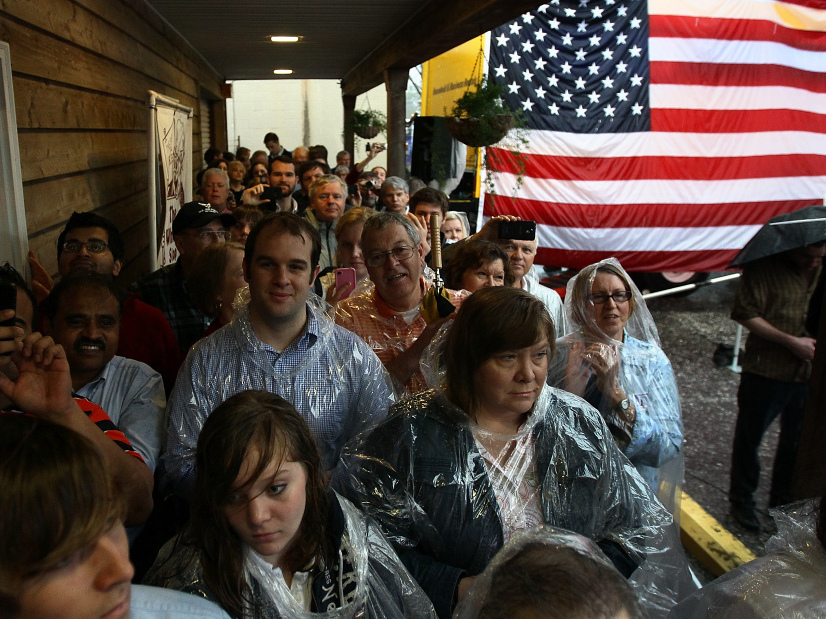 Supporters take cover from the rain as they listen to Republican presidential candidate Mitt Romney speak at the Whistle Stop cafe March 12, 2012 in Mobile, Alabama. Alabama and Mississippi hold their primaries today.

Read Another Opinion On The GOP Candidates

Alec MacGillis is a writer for The New Republic

The year before his 2010 retirement from the Senate, Ohio Republican George Voinovich offered one of the more candid and colorful recent assessments of what had happened to his party. Asked byThe Columbus Dispatch what his party's biggest problem was, he answered: "We got too many Jim DeMints and Tom Coburns. It's the southerners. They get on TV and go 'errrr, errrrr.' People hear them and say, 'These people, they're southerners. The party's being taken over by southerners. What they hell they got to do with Ohio?'"

Granted, a year after he said this, the Republican wave made the party look a little less regionally boxed-in — a Republican (Rob Portman) won Voinovich's seat, a Republican (John Kasich) became governor of Ohio, and another Ohioan, John Boehner, became Speaker of the House. Still, Voinovich's broader point was right on — the profile of today's GOP is inextricably linked with the party's rise to dominance in the South. The party's Southernness helps explain it's potent mix of evangelism, strong support for the military and visceral opposition to taxes and social programs. It also helps explain its striking racial homogenity, a feature that is causing no end of concern for party strategists like Karl Rove.

But it also raises a question regarding today's Republican primaries in Alabama and Mississsippi: If this year's GOP presidential candidates have all year been making such a conservative pitch in order to appeal to a party shaped by the South, why have they been having such a hard time connecting with voters in the most Southern states of all? I was unable to cover these two primaries — too bad, because I know from prior visits that early spring's a fine time to be in that corner of the country. But from the coverage on the ground, one gets the sense that voters in the two states have not know what to make of these candidates, despite the fact that their stump speeches have, it would seem, been tailor-made for them. In Monday's Washington Post, David Fahrenthold and Krissah Thompson reported:

It sounded like a perfect match, red meat for red states. But, instead, everybody seemed a little uncomfortable. At rallies in Mississippi and Alabama, which hold primaries Tuesday, the candidates awkwardly fished for something they might have in common with Southern audiences. Newt Gingrich talked about gun racks but got his facts wrong. Mitt Romney announced, "I like grits." Rick Santorum tried to describe a connection to Alabama but admitted he was not a frequent visitor. [The connection was his citation of the old quip about his home state, Pennsylvania, being Philadelphia and Pittsburgh with Alabama in between.]

In small towns, many voters said they had noticed a cultural disconnect between themselves and the three East Coast-based candidates vying to lead their party. The candidates talked about conservative values, of course.

But, to people in pine-woods towns, it didn't seem like they were living them out in the same way. "Southern people are conservative by need. You know, if you lived in the South 40 years ago, you'd know what I'm talking about," said Donald Crocker, who has cut hair in tiny Leakesville since 1966. He meant that Southerners had learned to live poor, relying on their churches and their neighbors and not expecting government help. Even when their forebears received government handouts — cheese and powdered milk — they scrimped and saved and used it all. He still tries to live that way, charging just $9 per haircut and $10 for a flattop.

He felt strongly that President Obama would destroy this way of life, displaying a bumper sticker that said: "If you voted for Obama in '08 to prove you're not a racist, vote for someone else in '12 to prove you're not an idiot!" But he suspected none of the GOP candidates knew what he was talking about. "I will vote for them" against Obama, Crocker said. "But they don't understand it like I do."

In The New York Times, Campbell Robertson suggests that if voters still thought that adopted Southerner Newt Gingrich had a shot at the nomination, they'd rally around him as happened in South Carolina.

In a booth at Jean's Restaurant in Meridian, Miss., Burnie Berrey, a 50-year-old elevator service technician, had some choice words for the Obama administration. Like many here, he is essentially a one-issue voter: the man who can beat President Obama is the man for him, even if that means eventually voting for Mr. Romney. The antipathy toward the current administration among Republican voters, described here in terms ranging from the vulgar to the apocalyptic, can hardly be exaggerated.

But he is hardly more complimentary of Mr. Romney. "He's just Obama all over again," Mr. Berrey said. "I would prefer Newt get it. He knows how the government runs, and he's damn smarter than the rest of them."

Nobody taps into the old fighting strain of Southern politics like Mr. Gingrich, who styles himself as an intellectual brawler who can outsmart the know-it-alls in Washington. If the primary had been held a month ago, Mr. Gingrich would probably have won in a walk, and even those who are leaning away from supporting him are not quite ready to let go completely. "In the back of your mind you know what's coming," said Chandler Castle, a 32-year-old from Meridian who works in construction. "But," he added wistfully, as if speaking of an aging prize fighter, "I just want to see Newt and Obama in a debate."

Still, even Newt is not capturing the imagination of voters as much as he would like. So what's going on? What is the "it" that the Republicans "don't understand" as well as Donald Crocker does, despite their conservative platform?

Well, here's one thing to think about. What if the South has become so monolithically Republican that actual conservative proposals and argument of the sort that Santorum and Romney have been offering don't actually resonate all that much?

Consider: Republicans in Alabama and Mississippi reside in a universe where virtually all white voters vote Republican. And no, this isn't just an Obama thing — Obama only got 11 percent of the white vote in Mississsippi in 2008, but that was barely worse than the 14 percent John Kerry got four years earlier. Increasingly, being a Democrat in the Deep South — a Democrat when it comes to national politics — means being African-American. This means that political polarization in the Deep South is of a different sort than it is elsewhere. It is very much aligned with the region's deep racial divides, but it is also arguably less ideological than it is elsewhere. For Rick Santorum, being a Republican and conservative in Pennsylvania and northern Virginia where he now lives means standing up for what he believes in amid the liberal, secular hordes who are pressing around him. For Mitt Romney, being a Republican in Massachusetts has been a less combative stance, but still one that sets him apart from many of the people he moved about with. Whereas in Mississippi, being Republican these days basically just means being ... a white Mississippian. To the extent that daily life still remains racially segregated (not just in the Deep South, of course) that means that most Deep South Republicans are interacting with other Republicans.

Such isolation, political science suggests, leads to more extreme positions, on either end of the spectrum (see the poll Monday showing that GOP primary voters in the two states are evenly divided on whether Barack Obama is a Muslim and are only marginally in support of interracial marriage.) But it also could make voters less attuned to the sorts of arguments and sound-bites that Romney and Santorum have become used to offering to Republicans who are more used to having it out with people in their own communities.

Take Santorum's pitch for home-schooling, which may not resonate as much in a place like Mississippi. In other states, he casts home-schooling as the prerogative of parents who want to remove their children from the secular factories of the state schools. But in the South, white parents started pulling their children out of the public schools long ago — not for home-schooling but for private and parochial schools, and less because of godless teachers than because of Brown vs Board of Education. Or take Romney's railing against what he calls Obama's "crony capitalism" — loans for Solyndra and other favored green-tech companies. As TNR contributor Ed Kilgore pointed out during the Rick Perry boomlet, the South has long been enamored of doling out tax breaks and cash to companies who set up shop there, a form of industrial policy that is considered a-ok because it's done by local Republicans. In this context, ideology matters less than culture and group identity, which is perhaps why both men have been reduced to making such excruciating cultural panders.

In a sense, it's all water under the Pascagoula High Rise Bridge, given that either man will easily win the two states come November. But it might explain why both of them will seem far more comfortable campaigning in states that they will have a far harder time carrying in the fall — states where the trees are the right height, and not every white voter is a Republican.