Accessibility links
Aid Group's Role In Syria Pushes Limits Global online pressure group Avaaz has given crucial support to activists who aim to topple President Bashar Assad. It has smuggled in medical supplies and smuggled out images and information. But its high-profile and high-risk operations have stirred debate about the role it's playing. 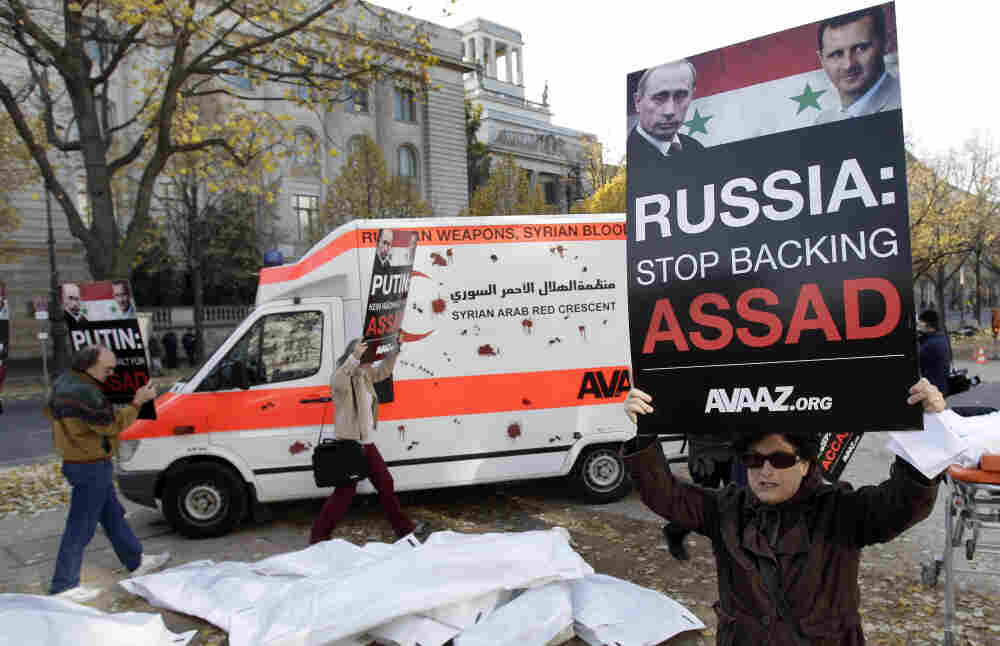 Campaigners from the international advocacy group Avaaz protest Russian arms sales to the Syrian government during a demonstration in front of the Russian Embassy in Berlin on Nov. 2. Michael Sohn/AP hide caption 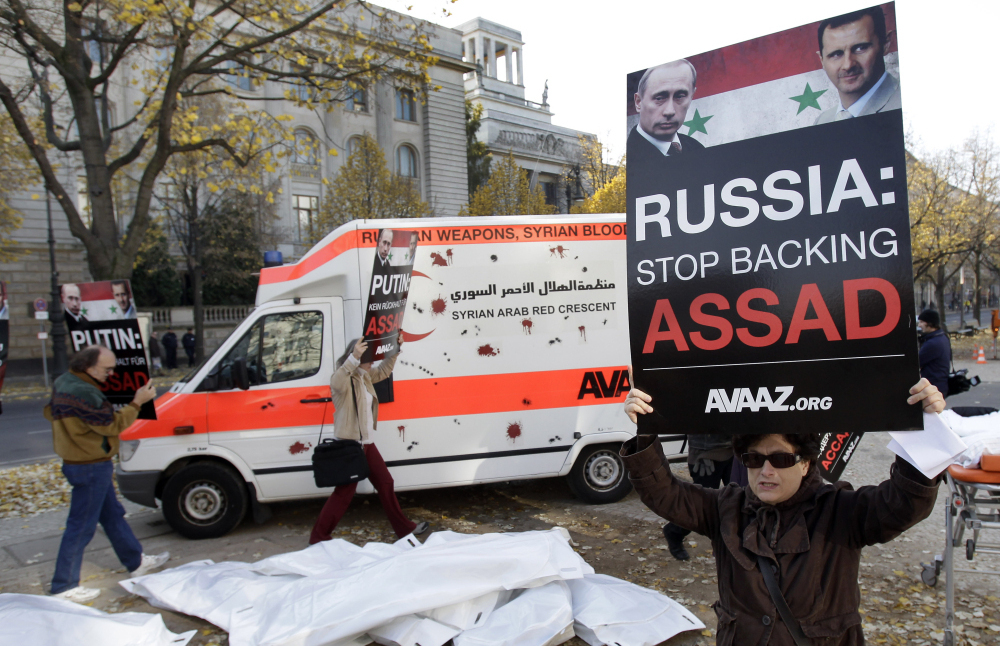 Campaigners from the international advocacy group Avaaz protest Russian arms sales to the Syrian government during a demonstration in front of the Russian Embassy in Berlin on Nov. 2.

A year into the Syrian uprising, with the world community reluctant to intervene, one international group has taken a direct and risky role in Syria — even taking part in the high-profile rescue of Western journalists from the besieged city of Homs.

Avaaz, a global online pressure group based in New York, has given crucial support to the uprising and the Syrian activist networks that aim to topple the regime of President Bashar Assad.

"We focus on what no one else is doing," says Wissam Tarif, a well-respected Lebanese human rights activist who joined Avaaz this year and heads the group's operation in Beirut, Lebanon.

Medicines In, Images Out

Since the early days of the revolt, Avaaz has provided Syrian activists with recording gear and the training to use it.

"There was a need for 'citizen journalists,' we provided the training," says Tarif. "When no one was doing the 'death count,' we built a network."

There was a need for 'citizen journalists,' we provided the training. When no one was doing the 'death count,' we built a network.

Many media organizations, as well as United Nations officials, rely on these casualty figures to track the violence inside the country.

Avaaz says it has delivered $1.3 million in medical supplies through an underground supply route to clandestine neighborhood clinics in Syria.

Thousands wounded during demonstrations dare not seek help in government hospitals for fear that shrapnel and bullets wounds betray them as activists to Syria's secret police.

"They are the only NGO [nongovernmental organization] who will get involved in smuggling," says Shakeeb Jabri, a Syrian activist in Lebanon, who regards Avaaz as essential for keeping the makeshift clinics operational. "So they have been doing good work. The rest can just get the medicine here [to Lebanon] and not get involved in the delivery."

In its latest online fundraising campaign, "Smuggle Hope Into Syria," the group's website asks for contributions to continue the smuggling operation: "As embassies close, medical agencies withdraw and journalists pull out, Avaaz has the only network that is both smuggling medial equipment and journalists in and images and information out."

'In Synch' With The Arab Uprisings

Avaaz, which means "voice" in various languages, describes itself as a "global web movement to bring people-powered politics to decision-making everywhere."

Founded in 2007, the group is modeled on MoveOn.org, an American advocacy group. Avaaz's website claims to set priorities "through polls of its 13 million members."

I am not questioning [Avaaz's] motives. But lives are at stake. Are they the right entity to do it? Is an NGO the right outlet?

Randa Slim, an analyst specializing in the Syrian opposition

Avaaz has given a voice to Burmese monks and supported a campaign to uphold the EU ban on genetically modified crops. The Arab uprisings gave Avaaz a larger international profile, using donations of $1.5 million to supply high-tech phones and satellite modems to activists from Libya to Syria, according to its website.

"They are in sync with what has defined the Arab uprisings," says a Western analyst who asked not to be named. "They flooded the place with [satellite] phones and computers, and they have their own contacts with the Western media and connect the two."

Much of the drive for this new kind of activism that expands the traditional role of nongovernmental organizations comes from founder and current president, Ricken Patel, a 35-year-old Oxford and Harvard-educated Canadian. Patel has done his share of work for NGOs in war-torn countries, from Sierra Leone to Afghanistan.

In an interview in New York, he told NPR's Kelly McEvers the lessons he drew from working with the public sector "when you're in war zones with crying human needs." He believes other aid organizations are often too slow and offer too little, and are "process-obsessed."

"It's risk-adverse, it's controversy-allergic," he said, "and there is one overriding principle, often it's 'cover your ass,' that governs the way these organizations function."

Traditional NGOs are severely constrained by the Syrian government, which has prevented international organizations from delivering humanitarian aid to "armed terrorist gangs" in cities besieged by the army. 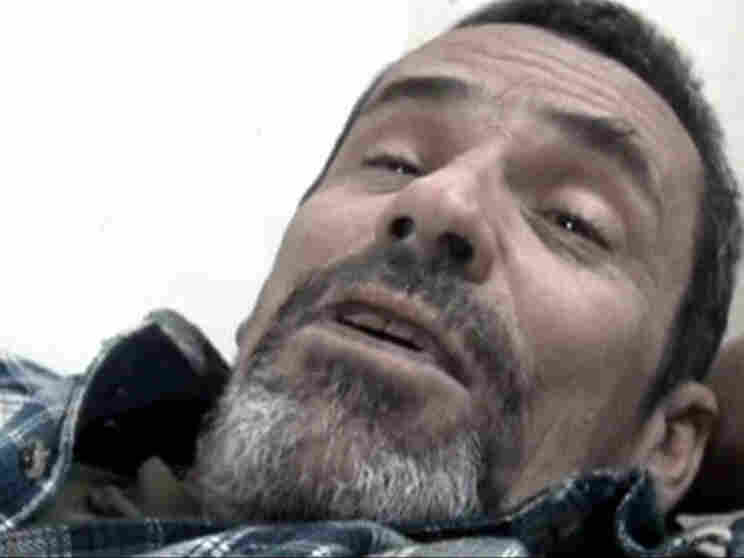 British photographer Paul Conroy lies on a stretcher as he is treated by a doctor in Homs on Feb. 22. Avaaz coordinated Conroy's rescue from the embattled city, an operation that left 13 Syrian activists dead. Reuters TV/Reuters /Landov hide caption 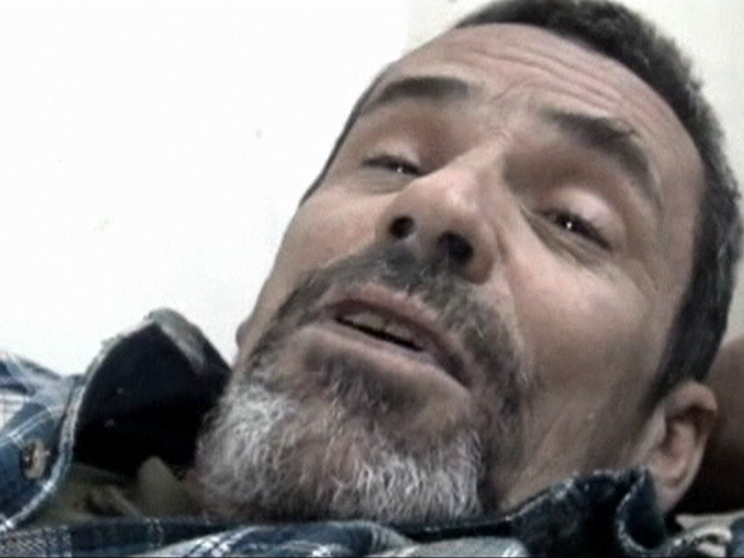 British photographer Paul Conroy lies on a stretcher as he is treated by a doctor in Homs on Feb. 22. Avaaz coordinated Conroy's rescue from the embattled city, an operation that left 13 Syrian activists dead.

The International Committee of the Red Cross was heavily criticized by Syrian activists in a Twitter campaign for what they said was the ICRC's failure to evacuate civilians in Baba Amr, during a military assault.

"We were furious," says Jabri, the Syrian activist in Lebanon, when the ICRC worked with the Syrian Red Crescent, which is an agency of the Syrian government.

Avaaz's fundraising campaign characterized the assault on Baba Amr as a "murder machine to crush the Syrian spring once and for all." Avaaz's aid operation is carried out without Syrian government approval.

Perhaps the riskiest operations came in February, when Avaaz announced it had coordinated the evacuation of British photographer Paul Conroy from the city of Homs.

Conroy was wounded as government troops bombarded the city, an attack that killed his colleague Marie Colvin of the London Sunday Times and French photographer Remi Ochlik. Thirteen Syrian activists died in the extraction operation.

Seven others linked to the operation were arrested by security forces and then "shot in the back of the head with their hands tied behind their backs," Avaaz's Patel said in an interview with the BBC.

The death of so many Syrian activists in the operation led many to ask if Avaaz has crossed a line, not just a border.

"I am not questioning their motives," says Randa Slim, a research fellow at the New America Foundation who specializes in the Syrian opposition. "But lives are at stake. Are they the right entity to do it? Is an NGO the right outlet?"

The group's website says the organization was responding to requests from the journalists, their families and colleagues to get them out and "worked with over 35 heroic Syrian activists each night who volunteered to help in the rescue."

As the most recent funding appeal makes clear, Avaaz continues to smuggle medical supplies and cameras across the border, as well as foreign journalists.

In this most brutal chapter of the Arab revolts, the battle for Syria is also a war of words and competing narratives. Since March, Avaaz has become the target of a fierce propaganda campaign inside Syria and on the Web as the Assad government spins the story through outlets the state controls.

The Al-Dunia video was also posted on YouTube. Websites linked to the Syrian regime allege Avaaz is part of a foreign conspiracy to overthrow Assad.

The Syrian ambassador to Lebanon has demanded a halt to smuggling operations.

Slim explains that Lebanon is under intense pressure for "allowing Lebanon to become a base for the opposition." Damascus now sees Avaaz as an arm of the opposition, she says.

In the power struggle over Syria, says Slim, "the question is, how long will they be able to operate in Lebanon."