Accessibility links
As Gangs Move To New York Suburbs, So Does Crime The sheer number of law enforcement officers makes it hard for big gangs to meet openly in New York City the way they did back in the 1980s, so many gang members who have left state prison have migrated north. Authorities say they brought shootings and stabbings with them. 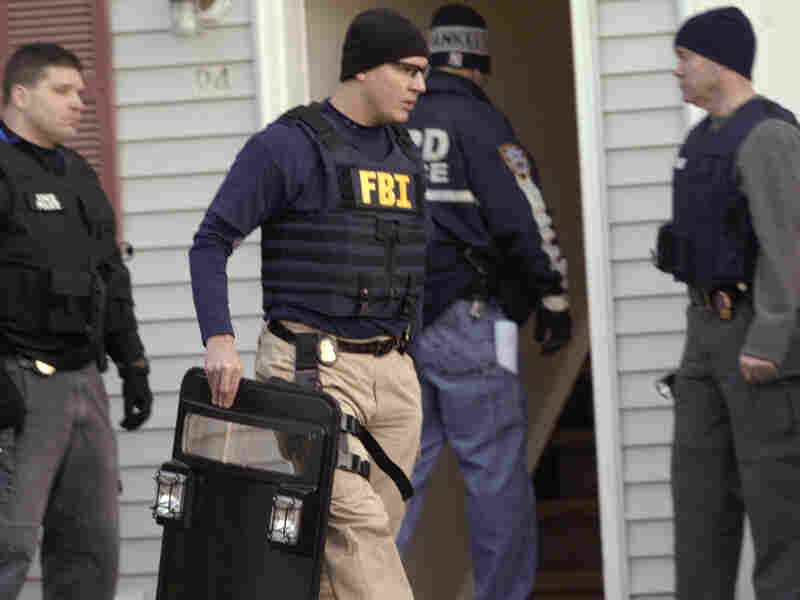 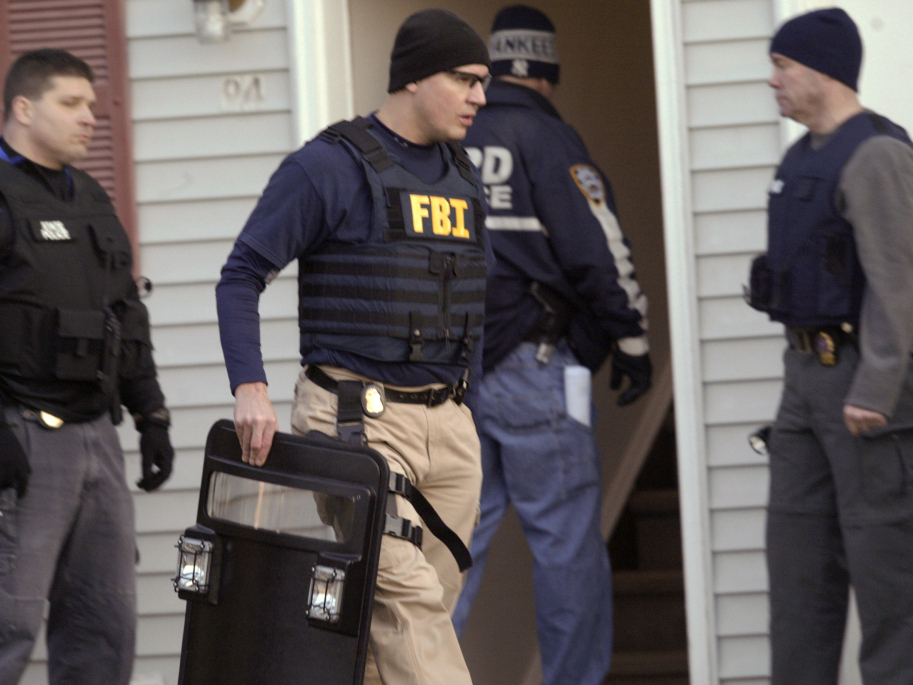 Law enforcement agents raid a home where the occupants are suspected of selling drugs last month in Middletown, N.Y. For three months, court papers say, authorities tracked them using wiretaps and cameras set up on telephone poles and trees.

Over the past few years, authorities have arrested more than 200 gang members in an unexpected place: the tree-lined suburbs along the Hudson River in New York.

Drug traffickers with ties to the Bloods, the Latin Kings and other gangs have put down roots there. Authorities say they brought shootings and stabbings with them.

Middletown, N.Y., is 90 minutes northwest of the city. On West Main Street, you can find tidy brick buildings from the 1800s, a brew pub, and a restaurant that sells fresh mussels and escargot.

But last month, a law enforcement task force used helicopters and SWAT teams to find something else: more than two dozen suspected members of the Bloods street gang, accused of racketeering, conspiracy and drug charges that could send them to prison for a decade.

An indictment says the group operated like a criminal machine, pushing cocaine, marijuana and heroin from the Bronx into New York's northern suburbs. For three months, court papers say, authorities tracked them using wiretaps and cameras set up on telephone poles and trees.

Preet Bharara, U.S. attorney for the Southern District of New York, is best known for prosecuting Wall Street executives. But he says preventing gang bloodshed is his top priority.

The Southern District Of New York's Gang And Drug Takedowns, August 2009 To Present

It all began when he sat down in upstate New York with a group of moms almost three years ago.

"When you think, what is the worst thing you can hear from somebody?" Bharara recalls. "It was this: A mother there talked about how she had lost her own son to gang violence in Newburgh, N.Y., and it made a big impression on me and the other people in that room. And then when you think, what could be worse than that? We listened to the next mom who spoke who said she had lost two sons."

Violent crime is at historic lows in New York City. But here in Middletown, reports of violence ticked up last year, and some neighboring cities like Newburgh have the highest rate of attacks per capita in the state.

One incident, a stabbing connected to the Bloods gang last summer, took place at a local diner along one of Middletown's busy thoroughfares. On a chilly recent morning, as parents walked their children to school, Ruben Rivera arrived to pick up his breakfast.

Rivera has lived in Middletown for more than 20 years, raising nine children. It used to be quiet. No more, he says: "No. No. You gotta do something. No."

A few years ago, Rivera says he got mugged by a man carrying a knife. Now, he tells his youngest daughter to stay inside at night.

Ten minutes away, at the Middletown Police Department, an officer takes an accident report in the front room while Lt. Greg Metakes describes the gang presence in the city.

"Whereas in the past it was somewhat, I guess you could say underground, now they're a little more open, more willing to display colors and things of that nature," Metakes says.

Back in New York City, the sheer number of law enforcement officers makes it hard for big gangs to meet openly there the way they did back in the 1980s, so many gang members who have left state prison have migrated north. Less heat, more opportunity.

And that opportunity is focusing on Orange County, home to Newburgh and Middletown, all too often for the liking of District Attorney Frank Phillips. He's working out of a nondescript office building these days, after Hurricane Irene left six inches of water in his grand-jury room. Then, the mold set in.

But Phillips, who's served as the top county prosecutor since 1986, has another plague on his mind: gang leaders in his community.

"These aren't the drug addicted street urchins who are being swept up there for statistical purposes," he says. "These are the real movers and shakers behind the level of violence that's being committed upon our citizens throughout the county."

Phillips welcomes help from federal authorities who have the resources to wiretap gang members and conduct surveillance.

"If they can keep taking the top echelons down, I think that will go a long way to keeping a lid on the violence as best we can," he says.

The man on the front lines is FBI agent James Gagliano. He runs the Safe Streets Task Force in the area — 10 FBI agents and 20 more officers from federal, state and local agencies.

"We use these drug cases to, you know, to compel cooperation, which in turn allows us to go after the folks that are doing the shootings and the stabbings," Gagliano says.

The strategy works like this: Long before they bring any criminal charges, investigators try to identify the key leaders in the gang. They look at whether those kingpins may have prior drug and weapons convictions, which expose them to decades more in the federal prisons.

That leverage could help prosecutors pressure them to plead guilty.

Gagliano, the FBI agent, says he has a bigger responsibility than just solving crimes. He coaches basketball to kids from the rougher neighborhoods.

"It also gives me an opportunity to interface with some of these young kids at a young age before the Bloods or the Latin Kings or La Eme or the Benkard Barrio Kings or Mad Drama or any of these other gangs get their claws into these kids," Gagliano says.

He still watches some kids follow a dangerous path, but Gagliano says he has the attitude of a guy who watches forests. He'll clear out the dead wood, but stick around to help the young trees grow straight.