Accessibility links
The Debate Over Bombing Nuclear Facilities In Iran The Israeli government wants America's support and help for any possible attack on Iran. U.S. officials have said this isn't the right time for airstrikes. New York Times Washington correspondent David Sanger explains what's at stake for both sides. 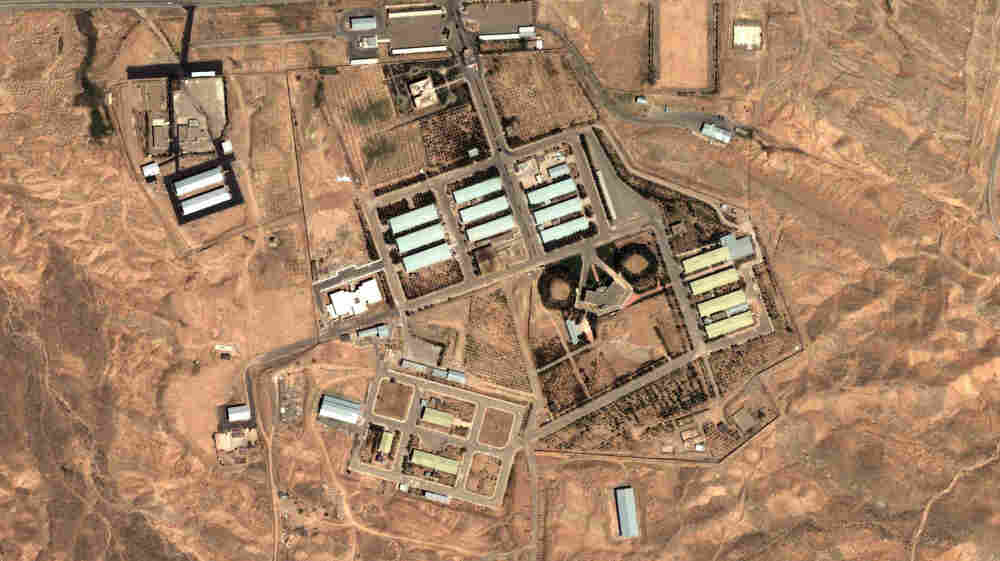 This Aug. 13, 2004, satellite image provided by DigitalGlobe and the Institute for Science and International Security shows the military complex at Parchin, Iran, about 19 miles southeast of Tehran. Anonymous/AP hide caption 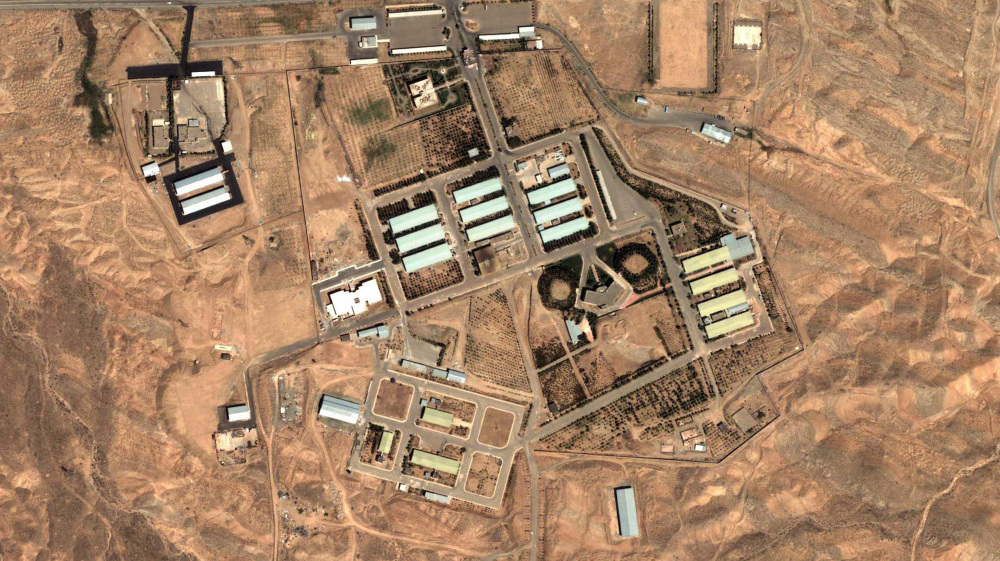 This Aug. 13, 2004, satellite image provided by DigitalGlobe and the Institute for Science and International Security shows the military complex at Parchin, Iran, about 19 miles southeast of Tehran.

Iran said Tuesday that it is unwilling to allow international nuclear inspectors to have complete access to a restricted military complex, called Parchin, which is near the capital Tehran. There are concerns that the complex may contain a facility designed to test explosives meant to trigger a nuclear chain reaction.

Iran's position adds to the growing tensions over its nuclear program. Iran has long said that the goal is to generate electricity and to provide fuel for medical reactors. Israel, the United States and countries across Europe have said they believe the country is trying to build a nuclear weapon.

On Wednesday's Fresh Air, David Sanger, the chief Washington correspondent for The New York Times, talks about the ongoing nuclear standoff and details what could potentially happen if Israel decided to mount a military strike against uranium enrichment sites in Iran. 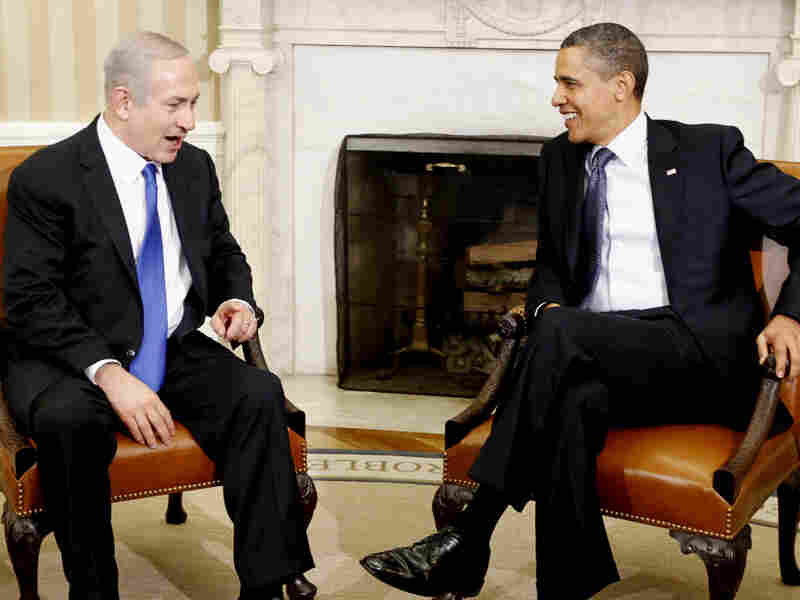 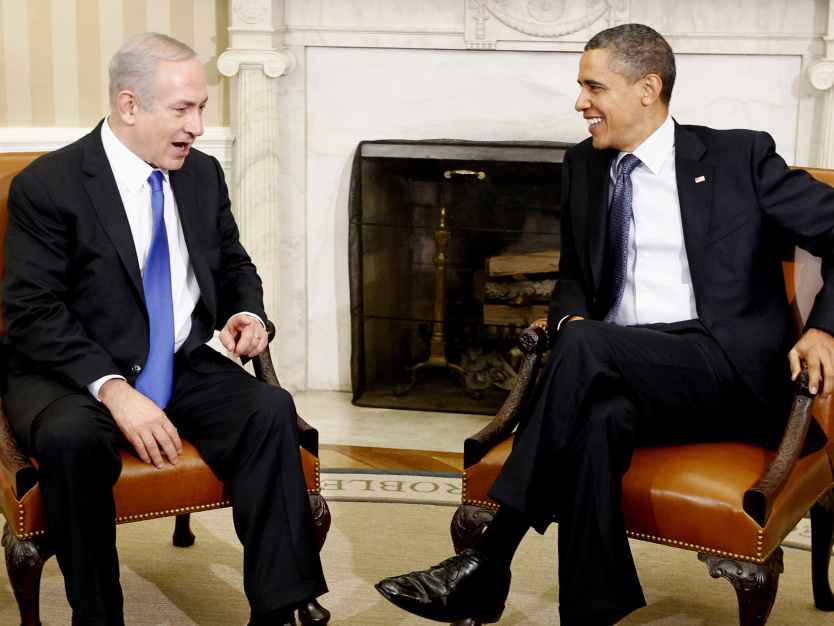 President Obama meets with Israeli Prime Minister Benjamin Netanyahu in the Oval Office at the White House on March 5.

President Obama and Israeli Prime Minister Benjamin Netanyahu met last week at the White House and discussed the issue. The Israeli government has sought America's support and help with any possible military action against Iran. U.S. officials have said they believe sanctions should be given more time to work, and they feel this isn't the right time for airstrikes.

"The Obama administration has taken the position that if regime change is really Israel's goal in Iran, then the bombing of the [nuclear] facilities would probably be the single most counterproductive step that they could take," Sanger says.

One key question in the debate is how much damage Israel could inflict on Iran's nuclear facilities — some of which are burrowed deep into mountains and underground sites.

"The Israeli position is that a bombing raid is within their capacity but that if the United States joined them, it would be much more effective," says Sanger. "They also argue that they could set the program back by two or three years, maybe more, if they did it alone. Now the American position has been [to say] 'What does that buy you? You get two or three years' delay. You unify the country against Israel and ... you end up giving Iranians an excuse to throw inspectors out of the country.' "

Sanger says the Obama administration thinks a short-term delay is not the best way to deal with the Iranian program.

Experts: A Strike On Iran Poses Many Challenges

"The Americans believe that over the long term, you'd simply have to go back and do it again," he says. "The Israelis have said they would go back and do it again. And then they point out that in the case of the bombing of the Iraqi nuclear reactor in 1981, they got a much longer delay than most people expected. And when they bombed the Syrian reactor that was built with North Korean help in 2007, that pretty much ended the program. But both of those facilities were above ground."

Sanger says there's also the possibility that Israel may be bluffing, to try to pressure the West and the United States to increase their sanctions against Iran.

"There is a possibility that, in fact, Israel is a long way from considering a real attack but believes that they need to keep the rhetoric going to keep the pressure on," he says.

He predicts that there's a "50-50" chance that Israel may attack Iran — but that it wouldn't take place in the "near future."

"Ithink it's interesting that after the meeting between President Obama and Prime Minister Netanyahu, the prime minister said that this was a problem that would not be solved in weeks or months, but also could not go on for years," he says.

On what an attack against Iran may do in Iran

Any attack on Iran would probably have the effect of unifying a very divided country.

"Any attack on Iran would probably have the effect of unifying a very divided country. It would bring up a nationalistic surge. It could force opposition politicians to side with the mullahs. It could make a battle with Israel or the United States an issue in the streets of Tehran rather than seeing those protesters out, as they were in 2009, protesting against their own government."

On the debate going on now in Washington and Jerusalem

"The most interesting debate going on right now is the one going on about whether an attack on the Iranian facilities would, in fact, set back what appears to be Israel's long-term goal and what might be the Obama administration's long-term wish, even if it's not its explicit goal."

On Mitt Romney's approach to Iran

"Mitt Romney has said that if he is elected, Iran won't get a bomb, and if Obama is re-elected, they will get a bomb. But when you listen to the specifics of what Mr. Romney says he would do to pressure the Iranians — a mix of the threat that ultimately the U.S. could use military force, extraordinary sanctions and so forth — it sounds to me a lot like what President Obama is currently doing. And certainly President Obama's sanctions regime against Iran is far, far tougher than anything we saw during the Bush years. The president argues that that is because he first made an offer to negotiate unconditionally with the Iranians. And the Iranians rejected that. But he maintains that the fact that he made that offer made it a lot easier to get a lot of the Europeans on board for heavy-duty sanctions."

On whether Iran would launch a nuclear strike against Israel, if it had the capability to do so

"We can't read their minds, but we do know they're interested in regime survival. So do I think there's a significant chance that the regime would build a weapon, put it on a missile and launch it directly at Israel? I think that's a pretty remote chance because the Iranians are interested in survival and know what the response would be, and know that Israel has 100 or so nuclear weapons of its own. So I don't think the Iranians would necessarily think about a national suicide mission. But if Iran had a weapon or even if there was significant belief that they could build a weapon very quickly, they might use that for some political advantage within the Middle East, some negotiating advantage. They might use it to help them conduct lower-level attacks with the thought that no one would want to escalate a confrontation with Iran if it had a nuclear weapon."

On the Arab Spring

"We learned two things from the Arab Spring. The first is that the best kind of regime change has got to come from within. You can't impose it from the outside. You saw things happen in the streets. And in some places — Egypt and Tunisia in particular — there is some hope of a more liberal democracy emerging. But I'd say, having just come back from Cairo a few weeks ago, that's a very iffy proposition right now. The regime change does not necessarily lead to the vision that the neocons and many around President Bush had in 2002 when they were saying that change in the Middle East begins in Baghdad and spreads out. But Iran is a particularly special case because if Iran got a nuclear weapon, you could imagine that there could be a direct security threat to the United States and certainly to many of its allies. So to some degree, the debate over the Iranian nuclear program has really been separated from the question of whether or not it could spread broader change in the region."