Accessibility links
For Afghans, Two Outrages, Two Different Reactions When U.S. troops inadvertently burned Qurans last month, it triggered large-scale rioting across Afghanistan that led to dozens of deaths. By comparison, the Afghan reaction has been comparatively muted so far to the shooting deaths of 16 innocent civilians. Why the difference? 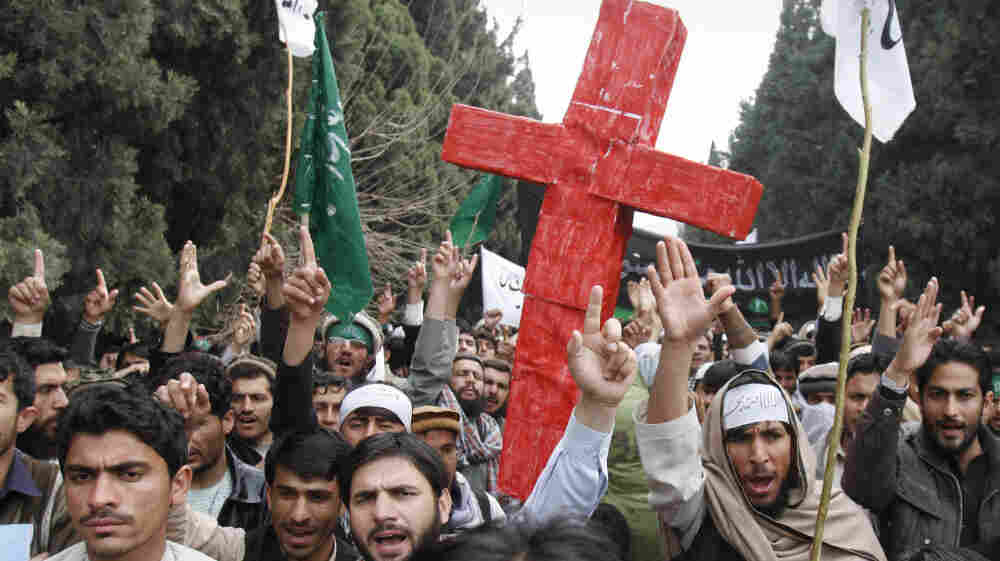 The Afghan response to Sunday's shooting deaths of 16 Afghan civilians has been limited compared with the recent outrage over the burning of Qurans. In one of the few protests, demonstrators chanted anti-U.S. slogans in the eastern city of Jalalabad on Tuesday. Rahmat Gul/AP hide caption

In the days since 16 Afghan civilians were shot dead on Sunday, apparently by a lone U.S. soldier, the Afghan reaction has been relatively restrained so far.

Why such different responses? It can seem especially confounding to Americans, who consider the shooting a far graver offense than the Quran burnings.

Analysts say a number of factors could be at play — the symbolic significance of burning a holy book, Afghan numbness to death after decades of war, the way news travels in a poor, underdeveloped country where many people are illiterate.

Whatever the reasons, the shooting Sunday "is not attracting anywhere near the attention in Afghanistan, in terms of media or public response, that the Quran burnings did," says Nora Bensahel, a defense analyst at the Center for a New American Security.

There has been some fallout from the Sunday shootings in southern Afghanistan. On Tuesday, militants attacked a memorial service attended by the provincial governor and two brothers of President Hamid Karzai, firing automatic weapons and launching rocket-propelled grenades.

That same day, a public demonstration took place in the eastern city of Jalalabad, with a crowd of 1,000 blocking traffic, burning President Obama in effigy and chanting anti-American and anti-Semitic slogans.

Such reactions have been isolated so far, though it's still possible that future public gatherings, like Muslim prayer services on Friday, could lead to broader unrest. 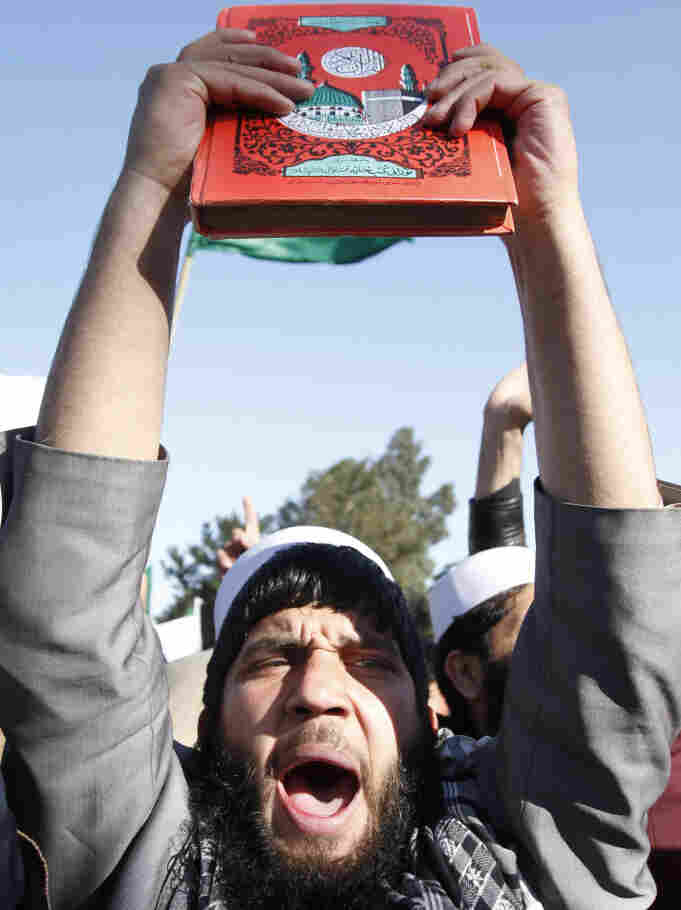 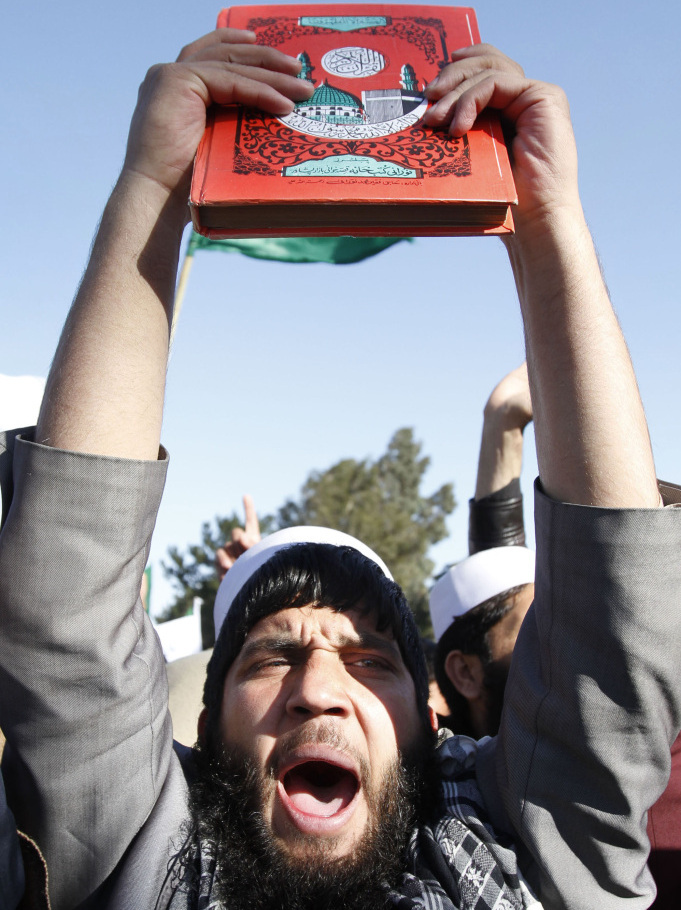 After U.S. troops burned Qurans last month, Afghans staged protests throughout the country. Here a demonstrator holds a Quran in the eastern city of Jalalabad on Feb. 22.

Any culture can become desensitized to violence over the course of a long war. Citizens may be shocked by initial reports of a relatively small number of deaths, but over time come to take far greater numbers of deaths almost in stride.

"You can become inured to the death of people in large or small numbers," says military historian Richard Kohn.

This may have happened to many Afghans, who have had to endure more than 30 years of conflict, between civil war, the Soviet occupation and more than a decade of American troops there.

Many Americans are shocked by the reports that a U.S. soldier apparently left his base and started shooting civilians.

But some versions of the story have been presented a bit differently in Afghanistan. Some Afghans have claimed that multiple U.S. soldiers were involved. The U.S. military has emphatically denied this. But this version fits into the larger Afghan narrative that the Americans, intentionally or not, have killed many civilians over the past decade.

"Although the loss of life is a terrible and tragic thing, I'm not sure the Afghans distinguish this incident from a whole lot of military raids where civilians were killed," said Bensahel.

By contrast, the burning last month of the Quran, which American officials emphasized was inadvertent, was taken by many Afghans as a deliberate insult.

The Quran burning is "a cultural offense, the burning of the book — an insult to the entire country and culture and religion and fundamental values," says Kohn.

Last year, Terry Jones, a Florida preacher, intentionally burned a Quran, setting off riots in Afghanistan. Back in 2005, Muslims also rioted following a report in Newsweek that guards at Guantanamo had intentionally desecrated the Quran.

Although the loss of life is a terrible and tragic thing, I'm not sure the Afghans distinguish this incident from a whole lot of military raids where civilians were killed.

Nora Bensahel of the Center for a New American Security

That report was partly retracted. Still, given that history, Americans should have known to treat the Quran with care rather than mistakenly incinerating it, Sina Samar, Afghanistan's human rights chief, said last week.

"Anyone who has a basic understanding of the Quran would understand that to Muslims, the Quran is the way God enters the world," says Omid Safi, a religious studies professor at the University of North Carolina. "If you really want to think of what the Quran means to Muslims, don't think of the Bible — think of the very person of Christ."

The fact that the recent burning took place at Bagram Air Field exacerbated the situation, Safi says. American troops have been accused of torturing and killing Afghan detainees there.

"It's that least desired combination — an attack on Islam linked to the symbols of American military might," Safi says. "For the Afghanis, it's the ultimate sense that no matter what name we put on it — nation building — that which Afghanis themselves hold most near and dear to their hearts is violated."

Visiting Camp Leatherneck during a previously scheduled trip to Afghanistan, Defense Secretary Leon Panetta said Wednesday that the Quran burning and Sunday's killings were "deeply troubling," but vowed that U.S. strategy will remain on course despite them.

American officials have carefully pointed out that the killings were carried out by a rogue soldier, but some Afghans will not distinguish them from the recurring deaths of civilians in night raids and drone attacks.

Rumors that more than one soldier was involved — or even that helicopters sent to retrieve the dead and wounded were really part of the attack — can only worsen such perceptions.

"It's going to rub Americans the wrong way," says John Esposito, an Islamic studies professor at Georgetown University, "but even though there are people who appreciate at a certain level that we've kept down violence, there are also people who feel we've killed enough civilians that we see life as cheap."