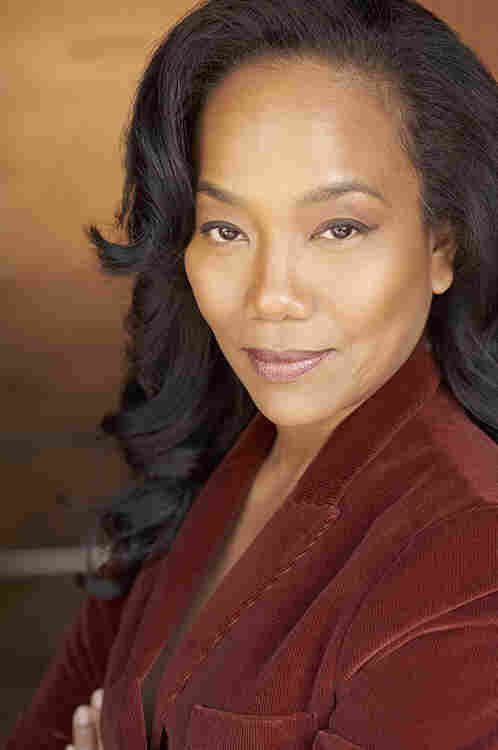 Sonja Sohn is currently starring in the ABC drama Body of Proof. She is the founder of the Baltimore nonprofit ReWired for Change. Peter Konerko/Courtesy Sonja Sohn hide caption

When the series ended, Sohn stayed in East Baltimore, where she co-founded a nonprofit called ReWired for Change. The organization works with young people who have been incarcerated and who are out on parole, to try to help them straighten out their lives. Sohn uses scenes straight from The Wire to help make her point through education, media and advocacy.

The project hits close to home for Sohn, who grew up in an underserved community in Newport News, Va. As a teenager, she went through several traumatic experiences — some that she continually had to revisit on set.

"It wasn't the scenes so much as the location," she says. "I realized that what was happening was that I was working in neighborhoods that were very reminiscent of the neighborhoods that I grew up in. I was seeing people that reminded me of the people I grew up with. I was essentially, on some level, experiencing a retraumatization. And my brain was just short-circuiting all over the place."

Despite having years of training both in acting and in the slam poetry world, Sohn started forgetting her lines on set. She contemplated quitting the award-winning series after the first season.

"It didn't dawn on me that possibly some of that stuff [from my childhood] could still be affecting my life," she says. "I started to learn a bit about trauma toward the end of my tenure on The Wire, and in the following years, I started to dive into that."

What was most difficult for her, she realized, was playing a cop on The Wire, in part because of her own experiences with the police as a child.

"My own perception of cops was that they came into your neighborhood, they roughed up people that you loved for no reason and took them away," she says. "As a child you saw that."

When she was older, Sohn started calling the police herself, to protect her mother, who was being abused.

"To call the police is a really big deal because you don't snitch — that's the culture you grow up in," she says. "You certainly don't want to call the police on your father. But if I thought my mother's life was in danger, I would pick up the phone and call the cops."

After one serious altercation, Sohn says, she remembers the police coming to her house and essentially doing nothing about the situation.

"I saw the cop look at the other one and roll his eyes and smirk and kind of laugh, and that angered me so deeply," she says. "I believe that sealed the inner dislike of the cops. So I had to overcome all of that to play this cop [on The Wire]."

After The Wire ended, many of Sohn's co-workers returned to Los Angeles, but she stayed in Baltimore to create her nonprofit, targeted at young people who were moving in and out of the juvenile justice system. The idea came to Sohn in 2008, as she was touring the country with other cast members from The Wire to educate people about their voting rights.

"It was during that time that we discovered that we had quite a bit of influence in these underserved communities," she says. "In North Carolina, we were doing some campaign work for now-President Obama, and we were distributing campaign literature, and we saw that there were people who hadn't voted in past elections who were literally going to vote."

The work made Sohn realize how influential her time on The Wire had been.

"We thought, 'Hey, if we can pull folks off the basketball courts in Charlotte to go vote ... what else could we do?' At that point, we thought we just couldn't use this social capital to promote our careers — it seemed so small," she says. "So when I came up with this idea that we start this nonprofit, the fellows all liked the idea and they said, 'We don't have time to run it, but if you can run it, we got your back,' and they became the founding members of the organization."

Actors Wendell Pierce and Michael K. Williams both serve on the board of ReWired for Change. Series creator David Simon is the honorary chairman. The organization works with teenagers in Baltimore to break the cycle of crime through education, creative arts and positive messages from role models.

Sohn says running the program makes her feel like her life is finally in balance.

"I felt like I was trapped in this acting game going, 'What is this all about? What is this all leading to?' " she says. "And in 2008, when I saw the kind of influence that a person who is in the public eye can have in the lives of those who have less, then I began to see, 'Ah ... this is the solution. This is what it was all leading to all this time.' And once I embraced that, life came into perfect balance. And that's what it's all about."

"My journey to becoming an actress is not your typical one. I didn't strive to become an actress all my life. It's not some goal that I had. This career essentially chased me down while I was on the spoken-word scene in New York. I kept hearing that my delivery of my poetry — which was very personal and cathartic at the time — was very moving to folks. People thought that I was an actress because of my delivery, when I was just dropping into the work and really pouring out my soul. At any rate, one thing led to another, and it seems like I couldn't escape this career chasing me, so I decided to stop, turn around and face it. I realized that there was something internal that I could gain from pursuing this career as an actor. However, once I got into the business I just really abhorred what this career can drum up inside of a person."

On her purpose in the world

"[Acting] really plays on your ego, and I had a really tough time with battling that and trying to balance that out. Beyond that, my main drive in life has always been to discover my purpose for being here, for living. ... And I knew it had something to do with helping people. ... And the entire time I was acting, I couldn't figure out what this had to do with my purpose."

On wanting to quit The Wire

"By the time I'd gotten The Wire, I was experienced. ... And I was ready. But I found myself, after hours of preparation, blanking out on my lines. Just completely spacing out. And I saw the reaction of my co-workers and the tension as the takes are clapping away and the time is ticking and the money is being spent. And I started feeling very humiliated and going, 'What is going on?' And I got very disheartened. And I would study for hours and I would know my material, and some days, it just wasn't there."

"I first smoked pot when I was 11 years old. At first, it was just us experimenting with pot. A lot of us had older brothers who were drug dealers, so we found the weed. ... And so, that's how we became introduced to it. ... By the time I was 13, I was smoking every day. I realize now that that coincided with a time in my life when I had just given up on things being any different at home. I had spent a lot of time during my childhood trying to fix my family and trying to find a way to make this work so that I could be home and be happy. ... All I wanted was to be happy. I wanted some peace."

On her older brother's murder when he was 29

"My brother said something to me when he was in his early 20s. He said he had this deep feeling that he was not going to live to be 30. And it was in his bones. And I had a tendency to see my siblings as being a bit self-pitying at the time. ... He was a gifted athlete, he was an amazing artist and he could sing. And I kept seeing all this talent going to waste. I was this little sister being the big sister, saying, 'You need to get yourself together.' He felt very deeply that he wasn't going to be 30 — and he died when he was 29."