Accessibility links
U.S., Pakistan At Impasse Over Afghan Supply Routes It's been nearly four months since a deadly U.S. airstrike led Pakistan to close the main supply arteries for U.S. forces in Afghanistan. The shutdown is forcing the U.S. to turn to costly, less-efficient alternatives. 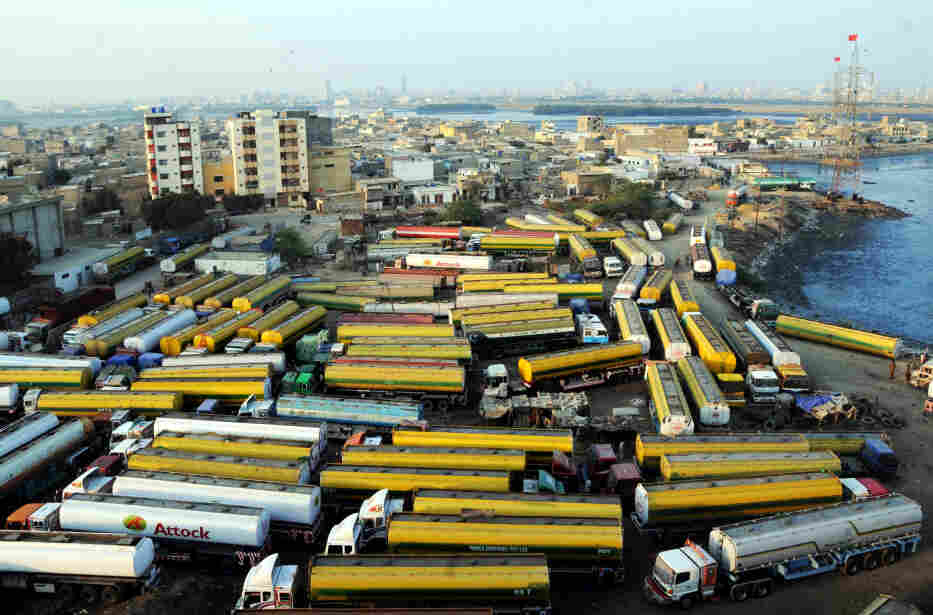 Oil tankers sit at a NATO supply terminal in the southern Pakistani port city of Karachi on Feb. 9. In November, Pakistan's government shut down the main routes for bringing supplies to U.S. and NATO troops in Afghanistan. Masroor/Xinhua/Landov hide caption

Nearly four months after Pakistan closed the main supply lines for U.S. and NATO forces in Afghanistan, the shutdown is creating hardship for Pakistani truckers and is forcing the U.S. to turn to costly and less-efficient alternatives.

The Pakistani move came after an errant U.S. airstrike left 24 Pakistani soldiers dead along the Afghan frontier back in November.

Shortly after that episode, the Shirin Jinnah terminal in the southern port city of Karachi ground to a halt. Normally it's a busy place, with oil tankers rumbling through the facility day and night. But these days, row upon row of oil tankers, some 5,000 of them, sit idle.

It's the same scenario at another nearby terminal for trucks carrying shipping containers. Since 2001, this has been a key starting point for the convoys that haul fuel and other critical supplies for U.S. and NATO operations into Afghanistan.

Since the Pakistani government shut down the supply route, drivers like Rehman Sher Alfridi say they have been paying the price.

"We have lost our livelihood; we are not earning anything," says Alfridi. "We just sit here. Unless the government makes a decision and allows us to go, we can't do anything."

Hardship For Pakistanis, Headaches For U.S

Alfridi's clothes, the traditional shalwar kameez, are stained and rumpled. He says he used to make 5,000 rupees — or more than $50, a significant amount of money in Pakistan — each day driving his oil tanker into Afghanistan.

While he is angry about the loss of income, he says he's even angrier at the U.S. for killing two-dozen Pakistani soldiers. The incident brought U.S.-Pakistan relations to a boiling point.

Akram Durrani, chairman of the All Pakistan Oil Tanker Owners Association, says the supply route should not be opened again until the U.S. apologizes.

"This has made people furious over the American attitude, that they have not offered an apology," Durrani says. "So if they offer an apology, we could also talk to them, help them. But this is not possible without the apology."

U.S. officials have expressed deep regrets for the loss of Pakistani lives, but they have stopped short of a formal apology. A U.S. investigation into the incident determined that it resulted from errors on both sides. Durrani says the U.S. doesn't appear to be too worried over the incident. 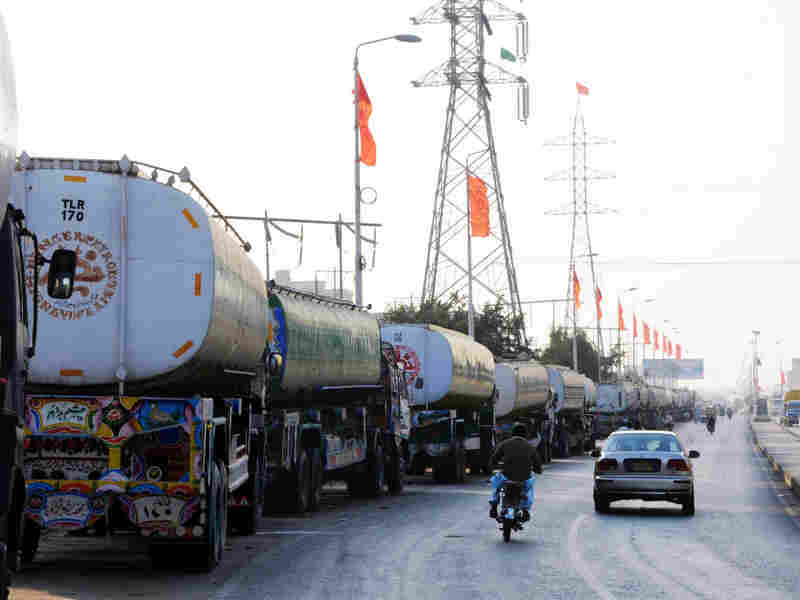 Oil tankers line the road near a NATO supply terminal in Karachi, on Feb. 9, 2012. Analysts say Pakistan is in no hurry to reopen the supply routes to Afghanistan, though truckers complain that they can't earn any money. Masroor/Xinhua/Landov hide caption 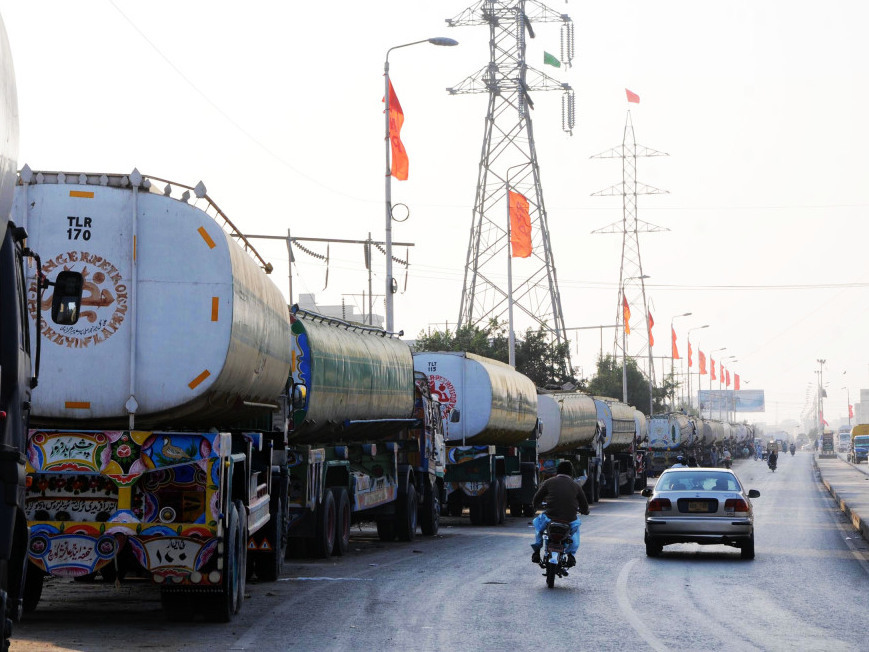 Oil tankers line the road near a NATO supply terminal in Karachi, on Feb. 9, 2012. Analysts say Pakistan is in no hurry to reopen the supply routes to Afghanistan, though truckers complain that they can't earn any money.

In fact, it is. U.S. officials say they need the ground supply route opened again — not only to get supplies into Afghanistan, but to help the drawdown of NATO forces from the country. Some shipments have been able to get into Afghanistan by air and by an overland route through a northern distribution network in Central Asia. But the route through Pakistan is better, cheaper and faster.

Senior U.S. military officials have been trying to visit Pakistan to talk about this issue. But Islamabad has delayed those visits until a parliamentary review decides on a new framework for relations between the two countries.

Talat Masood, a retired Pakistani lieutenant general and military analyst, says that until then, Pakistan doesn't appear to be in a hurry to reopen the NATO supply lines.

"This is one of the central issues between the United States and Pakistan, because it's more or less a lifeline as far as the logistics supply is concerned," Masood says. "So America expects that Pakistan would be reviving the supply line, but I don't think there is that sense of urgency here at all."

One U.S. official, who agreed to speak only on background, said if Pakistan wants more money to use the supply route, the government just needs to say so and it will receive it.

But Ayesha Siddiqa, a defense analyst and author, thinks the issue of the NATO supply route is emblematic of much bigger problems between the U.S. and Pakistan.

"I think the whole incident of NATO supply is reflective of a trust deficit," she says. "I think [there has been] very poor communication between the two governments, that they're not managing to start the essential talking to each other."

Siddiqa says Pakistan is likely using this time — and leverage — to work out what's best for the country, both financially and strategically.