Accessibility links
Surging Gas Prices Have Drivers Fuming Gasoline costs about 50 cents more per gallon than it did in January. Motorists dread the trip to the pump and wonder why prices are so high — and when they'll go back down. But growing world demand could mean oil prices will continue to rise in coming years. 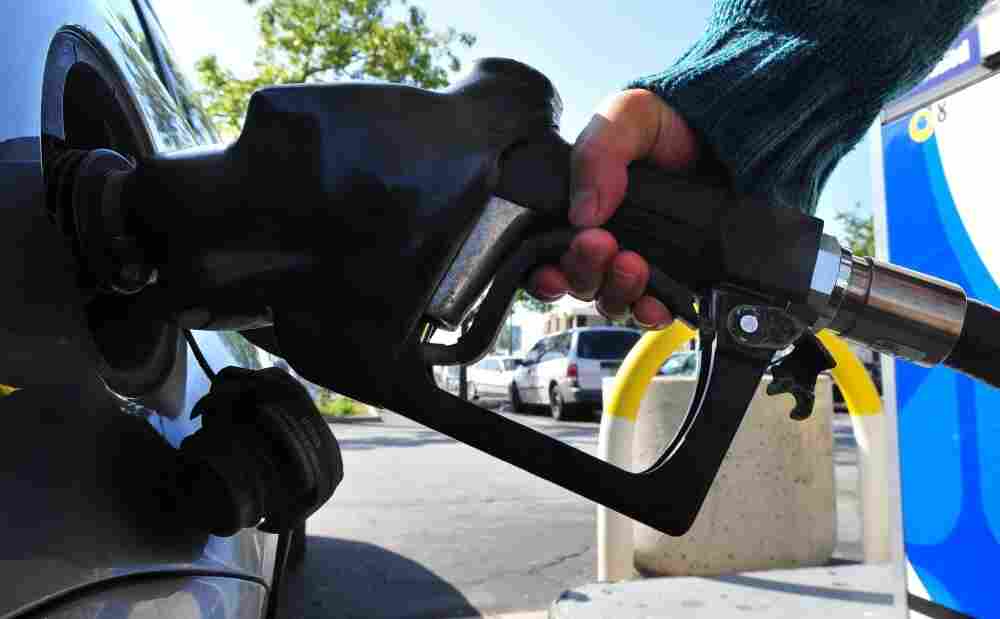 A driver pumps gas in Los Angeles, where prices are among the highest in the country, topping $4 a gallon. Frederic J. Brown/AFP/Getty Images hide caption

Gasoline prices have risen about 50 cents a gallon since January. The national average for regular gas stands at just above $3.80 per gallon.

Pity the drivers on the West Coast. Prices there have been much higher. At a Chevron station in Culver City, Calif., the price on Tuesday was $4.45 a gallon.

"I do building maintenance," Ursula Matthews said as she filled her tank. "I do a lot of driving from place to place. It's hurting me. I cannot raise the prices [of my services] with the economy what it is."

Lindon Dawson, another customer at the same station, wondered, "How long is this going to last? Because this is kind of making me broke."

There's good news for Dawson and his wallet. It looks like gas prices on the West Coast are headed down.

"Wholesale prices for gasoline are trading about 50 cents a gallon lower than they were as recently as Feb. 24," says Tom Kloza, chief oil analyst at the Oil Price Information Service in Wall, N.J.

That means retail prices are likely to head down soon too, at least on the West Coast. For the U.S. overall, the federal Energy Information Administration projects that regular gas prices will continue to rise to nearly $4 a gallon this summer, then decline at the end of the summer driving season.

Some of the biggest price increases in coming months will very likely be in the Rocky Mountain region, where prices have been lower than average. Currently, regular gas in Denver is selling for about $3.45 per gallon — a dollar less than in Los Angeles. Kloza says that's because refineries in the Rockies have access to cheap crude piped in from Canada and North Dakota.

Donald Keys of Denver seems suspicious of the frequent price changes lately. "I seen it the other night, 14 cents, overnight," he says. "I mean, who's in control of that?"

Ultimately, the station owner determines the price, based on the local market. But before that there's the wholesaler, the refiner and the company that pulled the oil out of the ground in the first place. The price of crude is about 75 percent of what you pay for gas at the pump.

I do building maintenance. I do a lot of driving from place to place. It's hurting me.

Those oil prices are determined well east of Denver, in New York. The electronic trading market that sets world oil prices is huge — much bigger than the oil market itself — and it's complex. That leads some to question the role of speculators.

Some of the recent run-up in oil prices was due to political tensions in the Middle East, involving Iran. When traders are worried the supply might be cut, they start bidding prices up.

"When they're raising our gas prices off pure speculation, that's getting a little out of hand," says Denver resident Scott Schmidtline.

The U.S. Commodity Futures Trading Commission is developing new rules for traders. But oil analyst Kloza says don't expect any revolutionary changes there. Beyond that, he says there are larger issues at play in the world.

"The major reason that oil prices are higher here in the last 15 months or so, is that tens of millions of people who were impoverished or who lived truly with just a sustenance-sort-of-based economy are moving into the lower reaches of the middle class," Kloza says.

While the U.S., Europe and Japan are using less fuel than in the past, much of the rest of the world is using more for transportation, agriculture and industry. That increasing demand worldwide is what's going to push up prices at your local pump for years to come.

The audio of this story, as did a previous Web version, incorrectly says that gas prices are up 80 cents a gallon since January. The correct amount is 53 cents.