Accessibility links
Just How Big Are The Eyes Of A Giant Squid? Huge. And large enough to see a massive approaching predator, like a sperm whale. But finding this out was no easy task; giant squids are mysterious creatures and it's hard to get accurate measurements. 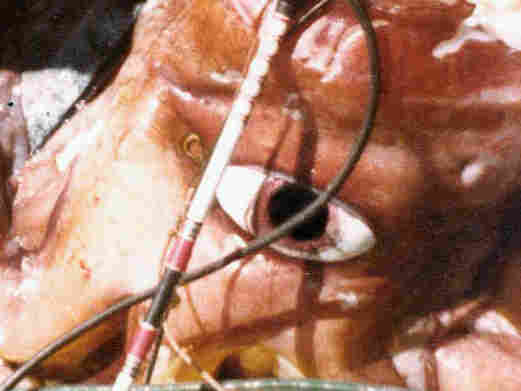 This giant squid was caught about 10 miles off the shores of Oahu, Hawaii, in 1981. The pupil of its eye measured more than 3.5 inches across. Current Biology hide caption 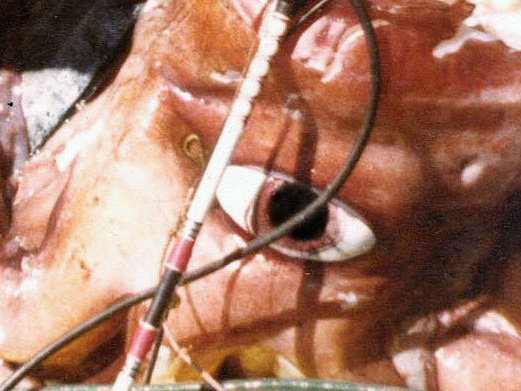 This giant squid was caught about 10 miles off the shores of Oahu, Hawaii, in 1981. The pupil of its eye measured more than 3.5 inches across.

Giant and colossal squids can be more than 40 feet long, if you measure all the way out to the tip of their two long feeding tentacles. But it's their eyes that are truly huge — the size of basketballs.

Now, scientists say these squids may have the biggest eyes in the animal kingdom because they need to detect a major predator, the sperm whale, as it moves toward them through the underwater darkness.

"It's always been a vexing question, of why they have such large eyes," says Roger Hanlon, a biologist at the Marine Biological Laboratory in Woods Hole, Mass. "Yes, the body is large, but the eyes are enormous."

Studying this mystery hasn't been easy, because it's no small job for researchers to get their hands on giant squids' eyes. These mysterious creatures dwell in the deep ocean, thousands of feet down. Scientists didn't even have photographs of a live one in the wild until 2004. Occasionally, a fishing boat will haul in a big dead or dying blob.

Yes, the body is large, but the eyes are enormous.

"By the time we get the eye, it's been kind of rotted, and it's not in good shape," says Hanlon, so it's hard to get accurate measurements — the kind of data scientists would need to really understand these eyes.

It took some time, but the research team was able to get some measurements they considered reliable.

"We heard about a fisherman in Hawaii who had caught a dying giant squid, which he put into his little boat and went into the harbor," says Dan-Eric Nilsson, a researcher at Lund University in Sweden. "And there, there was another guy who actually took a photograph of it."

In the photo, there's a fuel hose crossing the eye's pupil. The researchers used the size of this standard hose to calculate the eye's dimensions. The whole unblinking eye was about 10.5 inches across; the pupil was about 3.5 inches across.

They were also able to directly study the eyes on a well-preserved colossal squid that was frozen right after being caught. Nilsson helped dissect that squid, and he says holding one of its 10-inch eyes wasn't like a holding a round ball of jelly, because squid eyes aren't filled with the gelatinous stuff that's in human eyes.

"Squid eyes don't have that; they've just got water in their eyes," says Nilsson. "So when they are dead, the eyes collapse. It's like a collapsed plastic bag." 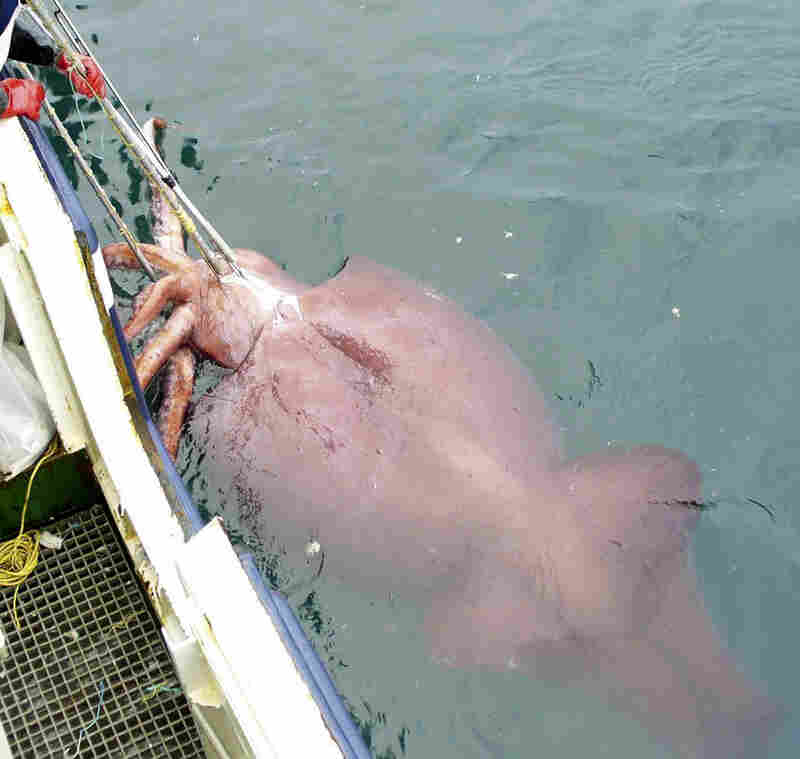 Researchers hooked this adult male colossal squid in the Ross Sea near Antarctica in 2007. The gigantic sea creature is about 33 feet long and weighed in at just under 1,000 pounds. New Zealand Ministry of Fisheries/Getty Images hide caption 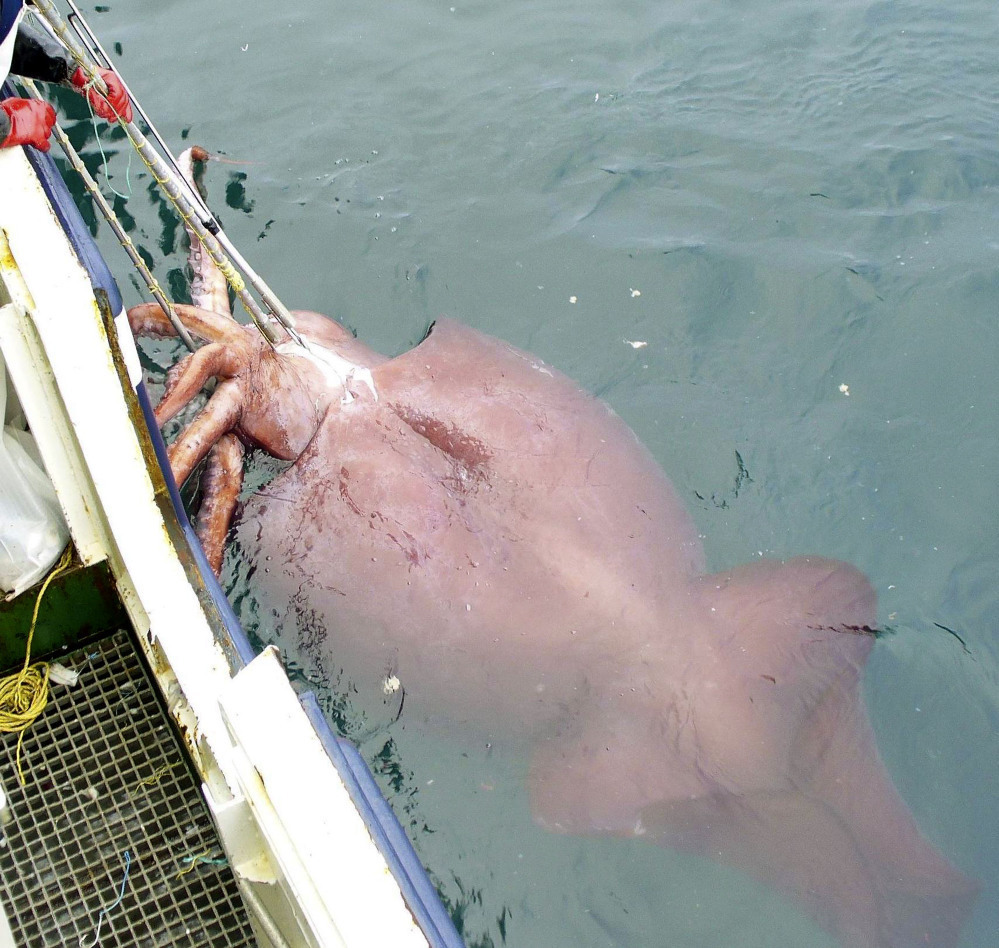 Researchers hooked this adult male colossal squid in the Ross Sea near Antarctica in 2007. The gigantic sea creature is about 33 feet long and weighed in at just under 1,000 pounds.

These squids live so deep, there's hardly any sunlight left. The researchers developed a bunch of calculations to predict how well different-size eyes would see in this dark, watery world. For seeing small objects like nearby prey, it wouldn't make sense to have eyes bigger than an orange.

But, Nilsson says, if you need to see extremely large objects from a distance, "then it pays to actually make the eye a fair bit bigger."

In fact, the researchers calculate that the squid eyes they measured are the optimal size for seeing something far away and massive — like the animals' main predator, the sperm whale.

Here's what they think: Imagine a sperm whale, intent on a lunch of giant squid. As the whale dives toward its prey through the water, using sonar that can't be detected by the squid, it disturbs tiny bioluminescent creatures that then light up. With its enormous eyes, a giant squid could see the huge glowing mass headed its way, and use its jet propulsion to make a quick escape.

This new theory, which appears in the journal Current Biology, has convinced Howard Howland, a scientist with Cornell University who has studied the diversity of eye size in animals.

"It's, I would say, an exemplary analysis," says Howland. "I think that this paper is going to set the path for a number of papers looking at the influence of the environment on eyes."