Accessibility links
Petitions Are Going Viral, Sometimes To Great Success Petitions have been a common form of protest throughout modern history, often bringing attention to a cause through little more than handwritten letters and word of mouth. But like a lot of other things, petitions are going viral. And one website in particular has contributed to the phenomenon. 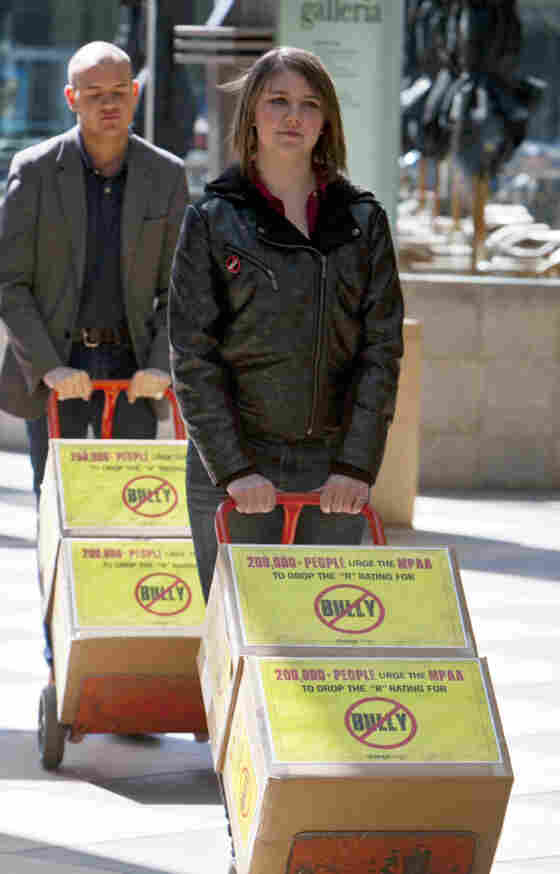 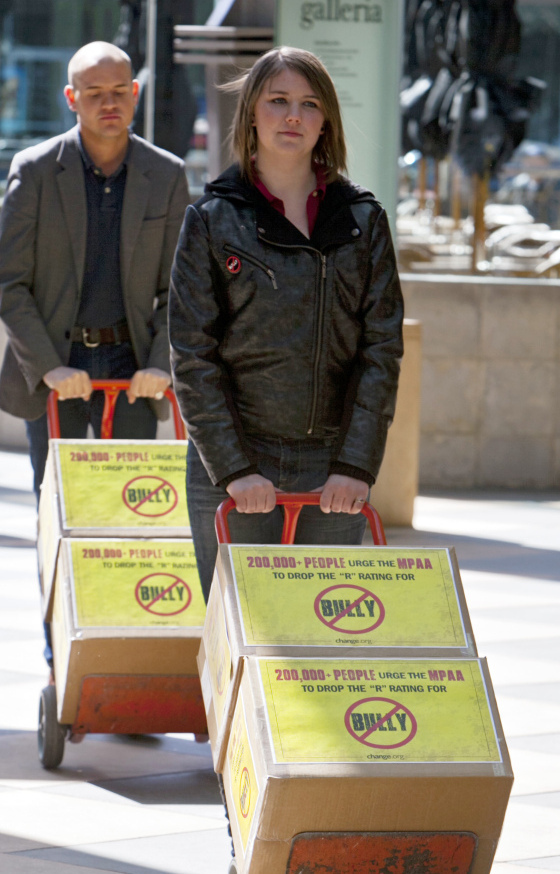 Michigan high school student Katy Butler, 17, and Change.org organizer Mark Anthony Dingbaum deliver petitions with more than 200,000 signatures to the Motion Picture Association of America in Los Angeles on March 7, asking the group to change the R rating on the documentary Bully.

Petitions have been a common form of protest throughout modern history, at times bringing attention to causes through little more than handwritten letters and word of mouth.

But like a lot of other things, petitions are going viral. And one website in particular has contributed to the phenomenon.

Change.org offers tools to let individuals start their own online campaigns, a way to bring instant awareness to issues that range from the environment to human rights.

Just this week, the group was credited with getting the high-profile virtual signatures of Ellen DeGeneres and New Orleans Saints quarterback Drew Brees on a petition to lower the R rating on an anti-bullying movie as a way to give more teens access to the film.

Change.org has a simple three-question, fill-in-the-blank form to let anyone start an online petition: Who do you want to petition? What do you want them to do? Why is this important?

Anyone on the site can read a petition, and — if they choose to — offer their electronic signature of support.

"I think it's part of an ecosystem," said Alan Webber, an industry analyst from the Altimeter Group who has been monitoring Change.org for the past few years. "You know, people are going to share petitions, but they're going to share those petitions via Facebook or via Twitter."

Ben Rattray, 31, founder and CEO of Change.org, said he came up with the idea while in college.

"When I was at Stanford, there was this combined interest both in entrepreneurship and in political-social change, and it was the one way I could identify combining the two and mobilizing people to advance the causes they care about," said Rattray.

Autistic Student Advocates for Herself, Other Autistics

Now, large organizations like the Sierra Club and Oxfam International pay to have their petitions promoted on the site, while individuals can post petitions for free.

More than 10 million people are using the site, and more than 15,000 new campaigns are launched every month, Rattray said.

One of Change.org's most famous online petitions targeted Bank of America's plan to charge a $5 monthly debit card fee. A 22-year-old woman filed a petition late last year, and within a month, 300,000 people had electronically signed the petition against the charges. The bank decided to drop its proposed new fee.

More recently, a class of fourth-graders petitioned Universal Studios to strengthen the environmental message in the Dr. Seuss story-turned-film, The Lorax.

Last fall, Emily Holcomb, a 15-year-old nonverbal autistic girl from Hamilton, Ala., was charged with a felony assault after she slapped her teacher.

"The sheriff's department was standing there, served me papers and wanted to serve Emily papers until I told them that, you know, she was a child with autism that was nonverbal with a mental capacity of about a 2- to 3-year-old," said Emily's mother, Jenny Holcomb.

When Holcomb's friend found out about the incident, she posted it on Facebook.

"And from Facebook it spread," said Holcomb. "That's when Lydia Brown contacted me and asked me, you know, if she could do a petition to have charges and stuff dropped."

Brown, 18, a student at Georgetown University in Washington, D.C., blogs about her own autism but had never written a petition.

At first, Brown said, "I was kind of like, I don't know how I should do this. I don't know if there's a template anywhere."

Then, some of Brown's friends suggested she use Change.org.

"I wrote this petition that came across in this very legalese, very formal kind of, 'We affirm that. We demand that,' kind of format," she said.

Later, she realized most petitions on the site are not written so formally. But it worked. Within days, around 1,200 people signed it online, and the felony assault charges against Emily Holcomb were dropped.

"I think eventually we would have got what we wanted" and had the charges dropped, said Holcomb's mother, Jenny. "But I don't think it would have been as soon" without the online petition.

Brown said she has since written two more petitions on Change.org related to autism.