Accessibility links
Traveling To The Corners Of Our 'Frozen Planet' The team behind the documentary Planet Earth have teamed up again to explore the coldest, most isolated places on Earth. TV critic David Bianculli says watching Frozen Planet "captures images of so much majesty, artistry, and clarity, it's almost ridiculous." 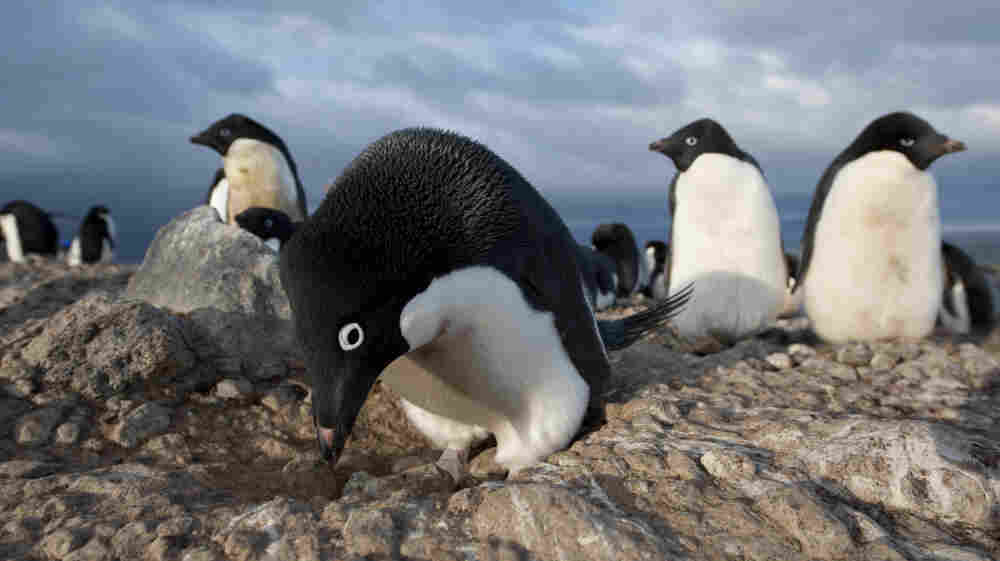 An Adelie penguin male builds a stone nest in anticipation of the females' arrival. The males compete over the precious stones, often resorting to stealing to get the best ones. Jeff Wilson/Discovery Channel/BBC hide caption 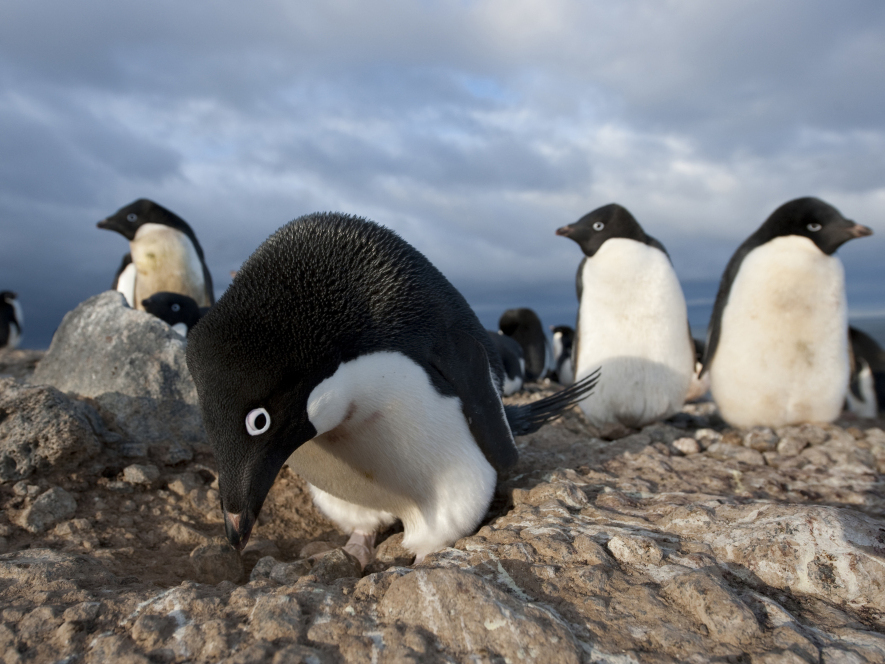 An Adelie penguin male builds a stone nest in anticipation of the females' arrival. The males compete over the precious stones, often resorting to stealing to get the best ones.

I don't want to complain about Frozen Planet, however, until I dish out a little praise.

Frozen Planet, which premieres this Sunday on the Discovery Channel, is the kind of program that television was made for — and, even more certainly, the kind that modern TV was made for. This series not only takes us, quite literally, to the coldest, most remote places on Earth, but captures images of so much majesty, artistry, and clarity, it's almost ridiculous. On a large-screen, high-definition TV, watching Frozen Planet is like having your own personal IMAX theater.

The newest technology affects not only how we see these images, but how they're photographed. Even since Planet Earth was made a handful of years ago, advances in video technology have allowed camera crews, armed with the latest equipment, to capture action in unprecedented ways. There's even time-lapse photography so precise, and so carefully planned out, that it pans and zooms while telescoping weeks and months into less than a minute. The result is a glacier that advances like a slow-motion bulldozer, crushing and moving everything in its path.

'Life' (And Other Good Things) Premiering On TV

The images are fantastic. A mammoth elephant seal, protecting his claim to a female, engages in a furious, bloody fight with an encroaching male. And if he's successful, he has to fight again — almost once an hour for several days, each time battling a fresh, determined rival. At the end, we see a dazed, bloody, obviously exhausted elephant seal making his way back to his mate. He may not be wondering whether she was worth it all — but I sure was.

And that's the thing about any nature documentary done well. One thing it should do is make us cherish, and think about, the beauty and value and fragility of the natural world. The other thing it should do is make us empathize with the natural drama of everyday survival. Television has been doing this, quite effectively, ever since The Undersea World of Jacques Cousteau and the nature specials presented by Walt Disney. And it's true that in many places in Frozen Planet, the narration, the music, and the simple storytelling combine to make it all feel like a much higher-tech equivalent of one of those Disney programs.

In the episode called "Spring," narrator Alec Baldwin describes the nest-building efforts of some Antarctic penguins. The males, he explains, build nests out of small pebbles on patches of dry land, because eggs would freeze within minutes if resting on snow or ice. And in one scene, the camera tracks a male penguin as he makes the long trek to find and return with one pebble at a time. The camera also catches a neighbor penguin, who waits until the other's back is turned to steal his rock. This happens again and again, and everything about the way it's presented makes it look, and sound, like a silent film comedy — or a classic Disney nature moment.

And that leads to my problem with Discovery Channel's Frozen Planet. As with Planet Earth, where the American network hired Sigourney Weaver to replace the original narration by Sir David Attenborough, this time Alec Baldwin gets the call. Attenborough survives, however, on the most important episode of the series — called "On Thin Ice"-- because that's the one where he speaks, from very personal experience as more than 50 years as a BBC nature documentary filmmaker, about how — and why — the Earth is changing. And, yes, globally warming.

Replacing Attenborough, for any of these shows, is very insulting. But everything else about Frozen Planet is very inspiring. Even the "Making of" episode is a winner. We get to hear a cameraman who's waited weeks to capture the moment when a frozen waterfall suddenly thaws, as he finally – and barely – gets the angle, and the daylight, to get the shot he needs – and when he does, we celebrate along with him.

The executive producer of Frozen Planet, Alastair Fothergill, has worked on Planet Earth, Blue Planet, and Attenborough's classic The Trials of Life. The two even teamed up for a previous visit to the Antarctic, almost 20 years ago, for a fine series called Life in the Freezer.

But it's good to know, somehow, that with all this knowledge, all these brilliant filmmakers, and all this modern equipment, many times getting just the right shot, at just the right time, is a matter of dumb, simple luck. And that makes me feel very lucky – to be able to sit back, in the comfort of my own home, and watch the astonishing results.