Accessibility links
Foreclosure Influx Causes Backlog In Some States The rate at which foreclosures are processed varies widely depending on the state. In New York, for example, it's taking about three years on average, compared with three months in Texas. The difference often has to do with whether courts are overseeing the process. 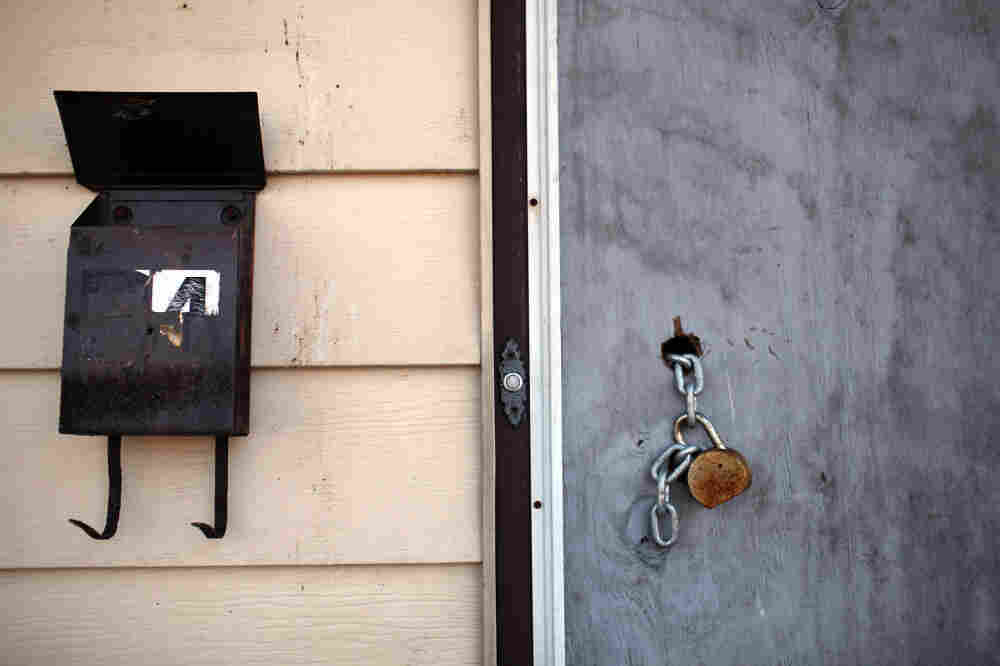 A padlock hangs from a door of a foreclosed home in Islip, N.Y. The time a foreclosure will take from start to finish varies widely from state to state. Spencer Platt/Getty Images hide caption

The fate of thousands of troubled homeowners in Central Florida rests in the hands of Lee Haworth, foreclosure administrative judge for Florida's 12th Judicial Circuit. "We were hit pretty hard," Haworth says.

His caseload exploded from fewer than 1,000 foreclosures six years ago to a backlog he estimates is now 20 times that. State budget cutbacks forced a reduction of staff, just as cases started flooding in.

"You know, I used to say that we were sailing with a skeleton crew, and then starting in 2007, we started throwing the skeletons overboard," Haworth says.

The story of the troubled housing market is increasingly a tale of two types of states. About half of states do not require courts to oversee and approve foreclosures. According to research firm RealtyTrac, cases in the nonjudicial state of Texas take about three months to resolve.

Interactive Map: How Fast Does Your State Foreclose?

Compare that with states like New York and Florida, where foreclosures are handled with judicial oversight. Judges such as Haworth say this gives homeowners greater due process in foreclosure. But it also often takes longer because of hearings and required paperwork. It takes more than 800 days — over two years — on average to resolve foreclosures in Florida. Haworth says that's largely because he and other judges often work solo.

"What we don't have are the people behind the scenes to help prepare the enormous amount of paperwork, to set the calendars, to drill down into the statistics to see which cases are languishing so we can move those ahead on the docket," Haworth says. "That key infrastructure is missing."

States with judicial foreclosures are trying to address the backlog. Florida, for example, increased its budget for next year to rehire staff and retired judges. In New York, where foreclosures are taking nearly three years to process, courts are trying to sift out cases where homeowners cannot afford even a modified home loan, to expedite those cases.

"The problem is that we're seeing this difference get more and more exacerbated," says Jay Brinkmann, chief economist for the Mortgage Bankers Association. He says by many measures, national housing statistics show signs of recovery. Even some hard-hit states like Arizona, which is a nonjudicial state, are starting to show some signs of revival.

It's not just that nonjudicial states are further along in their housing recovery. The backlog of foreclosures in judicial states, Brinkmann says, creates a lack of certainty for potential homebuyers in those markets. Why would you buy, if you thought the market might be soon be flooded with cheap homes?

Also, Brinkmann says, a long, drawn-out mortgage process is costly for banks. The banks have to shoulder the higher costs, not only for paperwork and lawyers but also for the homes themselves, including property taxes, cleanup and maintenance.

Brinkmann says history has shown that in states where default and foreclosure take longer, mortgage rates increase or fewer borrowers qualify for mortgages.

But not everyone agrees that a slower process is necessarily bad. Mark Fleming, chief economist for the research firm CoreLogic, says that in some ways, a slower system may be helping some housing markets get back on their feet.

"Is there a right or a wrong way to do this? I don't know," Fleming says. "You ask your child, how do you want your Band-Aid ripped off? Fast or slow? Some like it slow; some like it fast. It all depends on your preferences, right?"

Many factors shape a housing market, and the pace of foreclosure is only one of them.

Previous versions of this story incorrectly included Kentucky in the list of nonjudicial states.