Accessibility links
Violence In Schools: How Big A Problem Is It? The recent school shooting rampage in Ohio has once again focused national attention on the issue of student violence. But experts say such high-profile incidents overshadow an important trend: Overall, violent crime in U.S. schools has fallen significantly since the early 1990s. 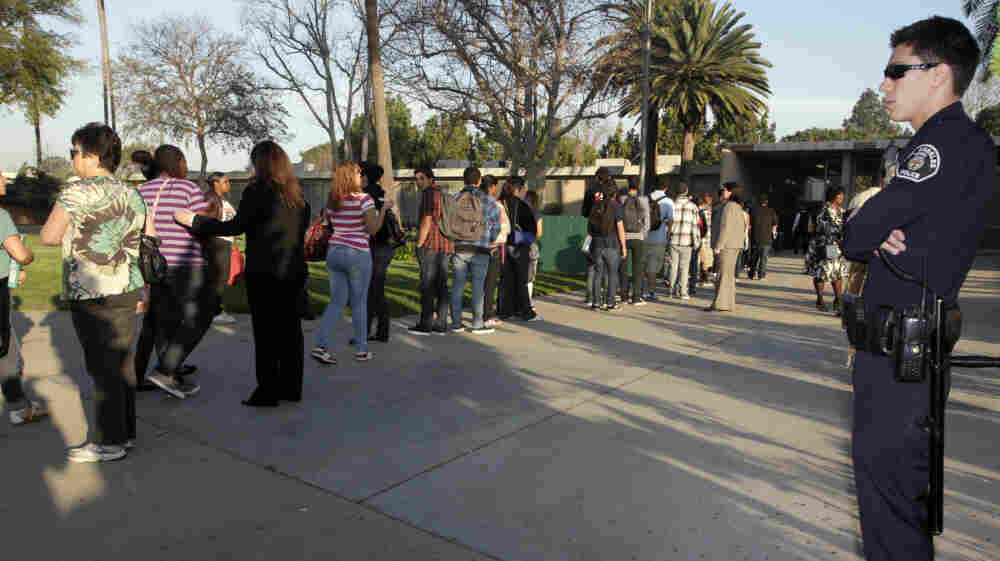 Students at Gardena High School in Gardena, Calif., lined up for a security check before school in January 2011. Nick Ut/AP hide caption 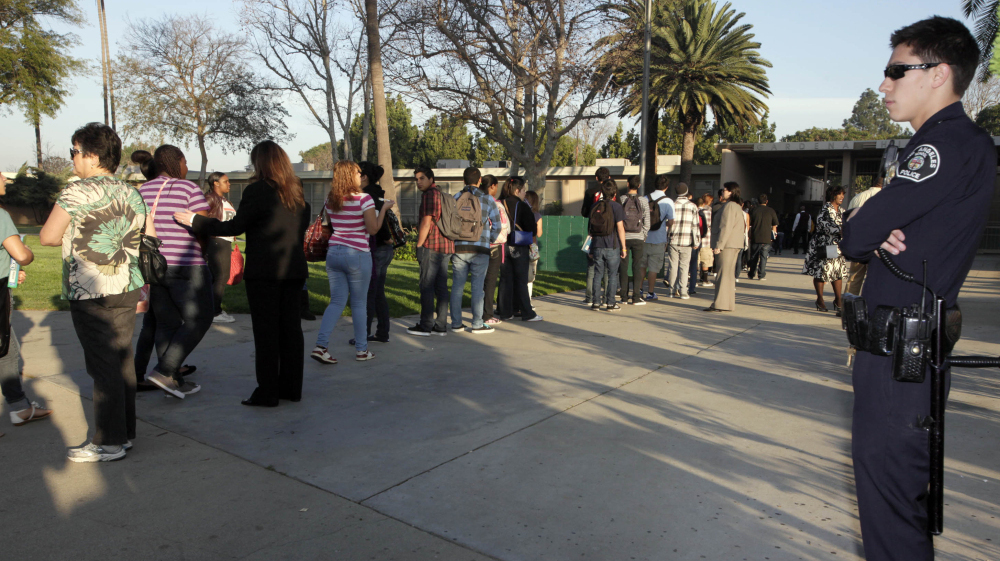 Students at Gardena High School in Gardena, Calif., lined up for a security check before school in January 2011.

When an Ohio high school student killed three classmates in a shooting rampage several weeks ago, it once again brought a national spotlight to a problem widely believed to be epidemic in schools.

The reality, experts say, is exactly the opposite: Violent crime in schools has decreased significantly since the early 1990s.

Not only are rates of school violence going steadily down, but it's clear that schools are the safest place for a student to be.

Dewey Cornell, a clinical psychologist and education professor at the University of Virginia, says incidents like the one in Chardon, Ohio, and the infamous mass shootings at Columbine High School in Colorado and at Virginia Tech have reinforced a perception that schools are dangerous places.

"But that's just not true," says Cornell, who has been examining school violence for decades. "I know on the heels of any school shooting, there's the perception that violence is on the rise. It's not. In fact, there's been a very steady downward trend for the past 15 years."

Safer Than Anywhere Else

Research by Cornell and others shows that school-age and college-age kids are not only safer but far more secure on school campuses than anywhere else. There's also broad agreement that the zero-tolerance policies popular in some school systems have had little to do with the decrease and may, in fact, have proved to be counterproductive.

School violence in the U.S. reached a peak in 1993, according to the National Center for Education Statistics. That year, there were 42 homicides by students in total, as well as 13 "serious violent crimes" — rape, sexual assault, robbery and aggravated assault — per 1,000 students at primary and secondary schools. By 2010, the latest figures available, those numbers had decreased to two homicides and four violent crimes per 1,000 students.

Statistics on violent crimes committed by students at college campuses are harder to come by. But a 2005 study by the Bureau of Justice Statistics took a broader look and found that some 93 percent of all violent crimes against university students ages 18 to 24 occurred off campus.

From 1993 to 2010, the number of homicides committed at primary and secondary schools by students has steadily shrunk.

"Not only are rates of school violence going steadily down, but it's clear that schools are the safest place for a student to be," says Stephen Brock of California State University, Sacramento, a leading expert on school violence and the author of several books on the subject.

It may come as no surprise that the 24-hour news cycle gets much of the blame for perpetuating a false notion about the extent of school violence.

"When you hear a news announcer say, 'In an all-too-familiar story' or call these incidents 'epidemic,' I think that's where this impression comes from," says Cornell of the University of Virginia.

The Case Against Zero Tolerance

So why are the nation's schools by and large much safer than they were 15 years ago? Cornell and Brock agree that it's largely a reflection of a decline in all violent crime nationwide, as well as a push in the 1990s for after-school programs that helped keep kids off the streets.

"There's been a lot of attention to this problem starting with the Clinton administration, and there have been some very effective initiatives taken at the local level," Brock says. "The schools are doing stuff that works, but that's not something you read about in the newspapers."

One thing that hasn't worked so well, experts say, is the tough zero-tolerance policies aimed at punishing any infraction of school rules.

Cornell says those policies, which became popular in the 1990s to combat drugs, alcohol and violence in schools, have largely been counterproductive. He cites a study of nearly 1 million students in Texas published last year that linked zero tolerance to a surge in suspensions and to higher dropout rates, especially among minorities.

When it comes to zero-tolerance policies "there's simply no evidence that they work," says Brock, who is co-chairman of a crisis prevention program run by the National Association of School Psychologists.

Instead, these experts advocate a more flexible "threat assessment approach," which is designed to identify students who might be a risk to others and then intervene to change the behavior.

Schools that have adopted that approach have shown a marked decrease in suspensions and bullying infractions, Cornell says.

"The schools we've studied — and we characterize their school climate — that are strict in structure and discipline but also emphasize having supportive connections with young people — have far less violent crime, less bullying, higher test scores," he says. "They are simply superior places for your kids to go to school."

Zero-tolerance policies, which vary widely from state to state and school to school, can seem extreme. A New Jersey teenager, for example, was suspended for five days last year for having an over-the-counter allergy medication in school. And a kindergartner was barred from school for 10 days in 2000 for bringing a nail file to class. Both cases made national headlines.

But Kenneth Trump, a school security consultant with more than 25 years of experience in K-12 settings, says most schools implement their zero-tolerance policies with "good common sense."

"The media has skewed this issue and it's become politicized," he says. "For every case where a student is expelled from school for a questionable infraction, we can point to half a dozen cases where the schools didn't enforce the policy for serious offenses."

Trump attributes most of the "bad calls" by schools to new administrators who simply need more training.

Betsy Landers, president of the National PTA, is circumspect about zero-tolerance policies, saying the decisions need to be made on a local level.

"Each community approaches it very differently because of different situations," Landers says. "I think what's important is that parents are front and center in making those decisions."

Despite the overall decline in school violence, Brock says it's important to acknowledge that there are still plenty of schools where it's a problem.

Some schools in cities like Detroit, San Francisco and Cleveland are struggling to make a safer environment for their students.

"In these cases, the violence in the school is a reflection of the fact that the schools are embedded in communities with higher crime rates," Brock says. "We should acknowledge that they have a problem."