Accessibility links
Jimmy McPartland On Piano Jazz One of the great cornet players from the early jazz era was also the late husband of host Marian McPartland. Piano Jazz celebrates the legend's centennial with a special concert from the Danny Kaye Playhouse at the 2007 JVC Jazz Festival. 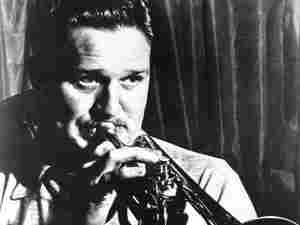 Piano Jazz celebrates the late, great Jimmy McPartland: early jazz cornetist, singer, and the husband and mentor of host Marian McPartland. This week's program features highlights from Jimmy McPartland's 1990 guest appearance on Piano Jazz, and a centennial celebration of his birth from the 2007 JVC Jazz Festival.

The program begins with a selection of New Orleans tunes. The up-tempo "Struttin with Some Barbeque" is performed by Marian McPartland and friends, and from 1990, Jimmy McPartland sings and plays cornet on "St. James Infirmary," "Basin St. Blues" and "I'm Gonna Sit Right Down and Write Myself a Letter." Jimmy was modest about his vocal abilities, but host and wife Marian McPartland has fond memories of his singing.

"He could really swing, he had such a joyful sound in his voice," she said recently. "Anytime we had a gig, he always sang several tunes. He could also play his horn with the mute and get a sound like Miles Davis. He didn't do that too often though. 'It's too high!' he would say!"

Jimmy McPartland said he began playing jazz while in high school in Chicago: "We got the instruments through my father, who used to teach music — he sold them to my friends very cheaply." McPartland's Austin High Gang included brother Dick McPartland, Bud Freeman and Frank Teschemacher. Around that time, McPartland came under the tutelage of a legendary figure in jazz: cornetist Bix Biederbecke, widely considered one of the most important jazz soloists of the 1920s. Jimmy replaced Bix in The Wolverines, and was given a new cornet that Bix picked out for him.

"Davenport Blues" is a 1925 tune by Biederbecke, performed on this episode by guitarist Howard Alden and Marian McPartland, in a duet from the centennial celebration at the 2007 JVC Jazz Festival. The tribute to Jimmy McPartland continues with two more tunes he picked up from Biederbecke: the swinging "China Boy" and "Singing the Blues," which Jimmy taught to Marian.

Next, Marian McPartland performs "Melancholy Mood," a tune based on a figure that Jimmy used as a practice piece. She stretches this simple grouping of notes into a brooding, impressionistic arrangement reminiscent of Bill Evans. Jimmy liked it, too — the couple performed the song together over the years.

The tribute ends squarely back in New Orleans, in a big band jam on a 12-bar blues that Mr. McPartland and Bix Biederbecke would have loved. Happy Birthday Jimmy!

All songs recorded at the Danny Kaye Playhouse on Jun. 19, 2007, for the Jimmy McPartland Centennial Concert, except "St. James Infirmary," "Basin Street Blues" and "I'm Gonna Sit Right Down and Write Myself a Letter," recorded for Jimmy McPartland's Piano Jazz program in 1990. This program originally ran March 21, 2008.