Accessibility links
'The O'Briens': A Multigenerational Canadian Epic Peter Behrens' new novel starts with a teen, ends with a railroad magnate, and covers plenty of ground in between. Canada's nation-building is the background of this sweeping family saga. 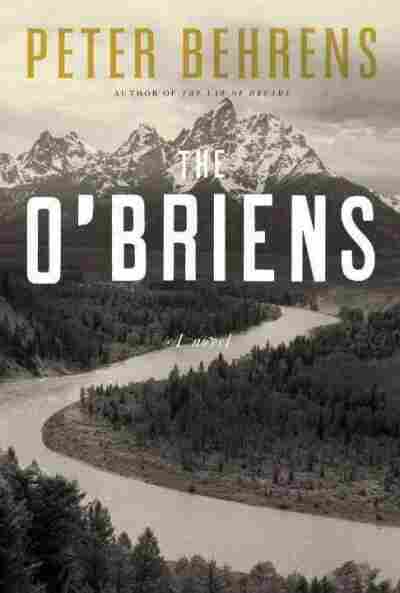 In the Law of Dreams, Canadian writer Peter Behrens' first novel, an Irish immigrant, based on Behrens' grandfather, makes his way out of famine-starved Ireland to Canada. The novel came out in 2006 to wide acclaim and won Canada's Governor-General's award for fiction.

Now, Behrens has followed up with another multigenerational novel. The O'Briens opens in 1867, with teenage Joe O'Brien scratching out a living in Quebec after his father and mother have both died.

Joe will go on to become the novel's patriarch. Behrens has taken the story of Canada's nation-building: railroads, churches, towns, two world wars — and made it part of the epic sweep of this book, which spans the decades to end in the 1960s. Behrens talks about his new novel with NPR's Jacki Lyden.

Read an excerpt of The O'Briens

In "The Law of Dreams," Canadian writer Peter Behrens' first novel, an Irish immigrant makes his way out of famine-starved Ireland to Canada. The novel came out in 2006 to wide acclaim.

Now, Behrens has followed up with another multi-generational novel. "The O'Briens" opens in 1867, with teenage Joe O'Brien scratching out a living in Quebec after his father and mother have died. Joe will go on to become the novel's patriarch. Behrens has taken the story of Canada's nation building: its railroads, towns, churches, and along with two world wars, made it part of the epic sweep of this book, which spans the decades to end in the 1960s.

Peter Behrens joins us now from Marfa Public Radio in Marfa, Texas. Welcome to the program.

LYDEN: So I've given a bit of an introduction to your protagonist, Joe O'Brien. Would you give us a picture of this very resourceful young man?

BEHRENS: Joe is the tough guy who comes out of the bush, as we say in Canada, the real backwoods in the 1890s and as a poor boy and an orphan and makes himself a fortune in a family by building railways in Western Canada in the period of the - just before the First World War; has a big family and wrestles with a lot of ghosts and demons from the Irish past.

LYDEN: You're obviously drawn to the Irish experience in North America. Tell me a little bit about your fascination, and your own heritage.

BEHRENS: Yeah. My great-great-grandfather, of whom I actually know very little, other than he came out of County Clare in the worst of the famine summers, 1847, and crawled ashore that summer on the wharf at Windmill Point in Montreal.

At the same time, my family in Montreal were, you know, prosperous people and they weren't necessarily interested in being Irish by the time I got there. Ireland was, you know, in the dim past and forgotten largely, and the memories connected to it were those of, you know, shame and poverty. They were very determined to be Canadian and be successful and they were.

LYDEN: And that's kind of where you start this book, isn't it? I mean, Joe O'Brien isn't particularly riffing on his Irish past. But he really wants to be the new man in the new place.

BEHRENS: Yeah. Joe is largely based on my grandfather. And my granddaddy, his name was John Joseph O'Brien. He had four daughters: Mary Margaret, Mary Frances, Mary Patricia and Mary Althea. He was the first warden of the Ascension of Our Lord Parish in Montreal, yet somehow we weren't Irish. We were Canadian. You know, we were in the present, in the now and all that Ireland stuff had been something that happened in the dim past and we were over it.

BEHRENS: Yeah. And I think it's the consequence of what we were speaking of earlier. All the stuff in this guy's past, his family past, the Irish past that he's not interested in exploring or expressing, that darkness and silence comes - and that lack of finally a feeling at home anywhere in the world, which comes from not acknowledging, you know, who you really are and where you come from - all that gets expressed in his relationship to the bottle. He manages to hold it together 364 days a year, maybe even for a couple years, and then he takes himself off to New York, takes a tower suite in The Pierre and, you know, he's found two days later in a pile of whiskey bottles on the floor.

LYDEN: You take them into combat in World War II, and you might almost have done a separate novel based around this, because it's so gritty and the voice changes and the novel becomes quite epistolary here.

BEHRENS: I felt the sense that these boys, being overseas in the '40s cracked them open in certain ways and the experience of combat opened and closed them in certain ways. And a lot of things that they - they didn't really have the language to express, given their kind of provincial, bourgeois upbringing in Montreal - were fighting for language in these letters. They're fighting to try to figure out how to explain to these women back at home what they've been through. And in a way there really is no language in their culture for it.

BEHRENS: This is a letter from Joe's son-in-law, who's married his oldest daughter Margot and he's gone overseas with a French Canadian regiment and he's fighting in Sicily in the summer of 1943. And he's writing back to his wife in Montreal who is, you know, a pretty innocent provincial girl.

(Reading) Margot, ma chere, my pen is almost dry as my mouth. What clothes do you wear, Margot? Do your fingers touch this paper? Does the ink speak to you? How are we connected exactly, Margot? I feel more of a connection to certain bullets than to you. Let me dispose of my adjectives. In your arms, please let me release them: bloody, silly, fecal, loud, beaten, red terror. You see, I've slipped into nouns, so let me deliver a few more, Margot. You don't have to unwrap these. Just sign for them, then you can put them away. Machine-gun. Anti-tank. 303. 88. Tree burst. Counterattack. Head wound. Prisoner. Aorta. Femoral artery. Battle. Are your thighs still your thighs? Oh, I'm sorry. I apologize.

LYDEN: You're a good reader.

LYDEN: What is it about the multi-generational family epic that so interests you? This is the second time you've done it now and I was thinking, well, is he turning to the Kennedys?

LYDEN: But I guess you had so much, so much material in your own family, perhaps not.

BEHRENS: Well, you know, I feel lucky. I grew up in a family that early on fascinated me. I mean, we were 17 cousins. We all grew up within a mile-and-a-half radius of my grandfather's house on the mountain in Montreal. When I was a boy, they were - they seemed very glamorous and romantic and almost mythic to me. And that fascination sort of at a certain point, you know, went numb and I wanted to get away from there and get out of there and become Jack Kerouac and get as far away as I could from Montreal.

And then it began turning around on itself. And when I was living in California I became all over again fascinated with them and started digging into them. It's also just how I understand myself and how I understand people. I think we all live in a continuum of family. We're shaped by the people who came before us and we shape those who come after us.

LYDEN: You take this group, the O'Briens - their progeny, the granddaughters, lovers, cousins, people who come in and out, even some of the help - and follow them all the way into the 1960s. And I don't think I give anything away by saying that the patriarch is still there. Are you thinking about following this, Peter Behrens, as a trilogy, with another book that moves it forward yet again? Or do you think, they're so assimilated now, you're done with the O'Briens for a while?

BEHRENS: I'm actually back in the 19th century again in the next book, and there are some family members in it but so far the dominant characters are Oscar Wilde and Sheriff Pat Garrett, who's just shot Billy the Kid.

LYDEN: Peter Behrens, his new novel is called "The O'Briens."

It's been a real pleasure talking to you. Thank you very much for being with us on this St. Patrick's Day.

BEHRENS: Thank you very much, Jacki.