Accessibility links
Greek Bailout Is Accompanied By Greek Resentment Debt-beleaguered Greece has secured a second international bailout, but for many Greeks, the conditions set by their EU partners are a breach of sovereignty. 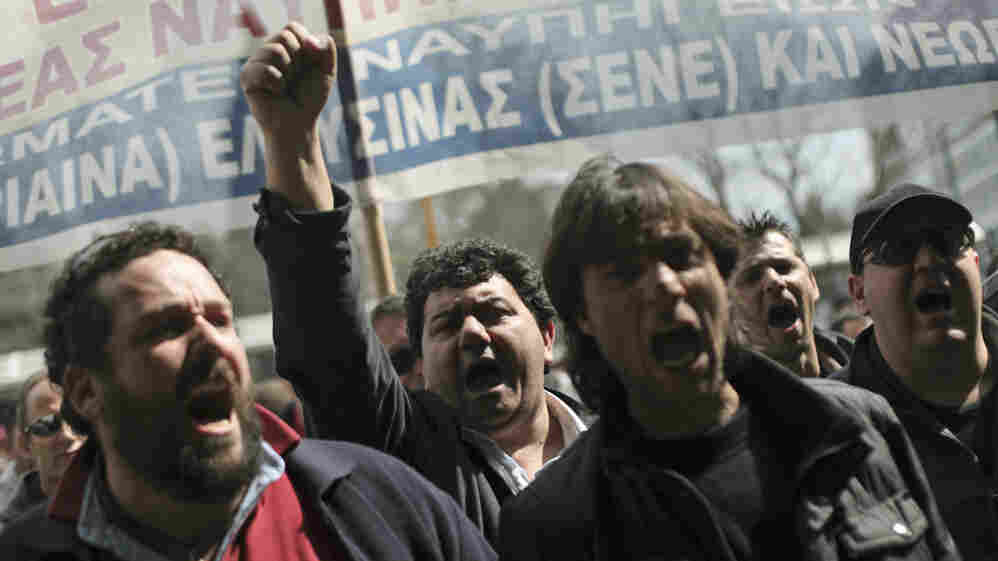 Shipyard workers demand their unpaid wages in central Athens on Thursday, the day that countries in the 17-nation euro zone formally approved a second bailout of $36.6 billion for Greece. Petros Giannakouris/AP hide caption 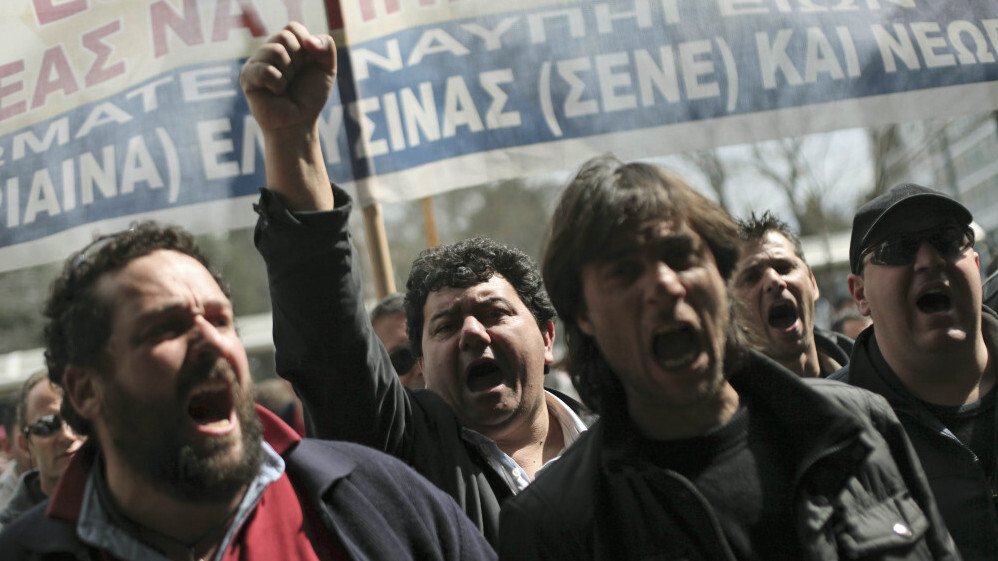 Shipyard workers demand their unpaid wages in central Athens on Thursday, the day that countries in the 17-nation euro zone formally approved a second bailout of $36.6 billion for Greece.

Debt-beleaguered Greece has secured a second international bailout. But for many Greeks, the conditions set by the International Monetary Fund, European Union and European Central Bank — known as the "troika" — are a breach of their sovereignty.

A recent demonstration in central Athens was organized by a group of lawyers who claim the latest bailout agreement turns Greece into the ward of its international lenders.

"First of all, many of the articles of the constitution are not working anymore," Lazana says. "Our constitution, it exists for only part of its articles, not all of them."

Members of Parliament had just two days to read and approve a 400-page document. Much of the legal fine print was available only in English. More than 40 Parliament members from the two major parties backing the government rebelled and voted no. One was former Socialist Labor Minister Louka Katseli, who says Greece abdicated its right to immunity over its assets.

"If, in the years to come, there is a problem repaying loans, our partners have the right to seize assets, including gold of the Bank of Greece," she says. "That's why I have argued that our national sovereignty has been limited to a dangerous degree."

Katseli says the troika stipulates that national collective labor contracts, which are enshrined in the Greek constitution, are now void. Another unconstitutional clause, she says, requires that all revenues of the Greek state must be first used to pay its debt before paying public services, wages and pensions.

"So servicing the interests of our creditors goes above the national interest," Katseli says.

With its emphasis on austerity and structural reforms, the troika sets specific goals and deadlines for every aspect of the economy — for example, substantial hikes in public transport rates and cuts in the minimum wage.

One of the most controversial conditions is the obligation to privatize all state-owned assets — from utility companies to public land. This has raised widespread fear that Greece is up for sale, at rock-bottom, garage-sale prices.

The EU Moves In

Resentment is growing toward Greece's EU partners, some of whose politicians have voiced worry about Greece's upcoming elections. That resentment isn't just coming from the left; George Kirtsos is a publisher, a commentator — and a conservative.

"We receive orders from abroad. The Parliament is a rubber-stamp parliament, the trade unions don't count anymore, and now all these German officials [are] admonishing you about the results of the future elections," he says.

The agreement with the troika also establishes the creation of a permanent task force in Athens formed by experts from the European Union. The task force's headquarters is being set up in a modern office building, off-limits to the media.

Here, a French team will deal with reform of the central administration while a Swedish team focuses on health care. Dutch experts will create a land register, while Germans will reform local councils and the tax collection system.

Building A Nation, Not Trust

With so many north European technocrats setting up shop in Athens, many Greeks feel their country is being treated like a protectorate in need of nation-building.

"Essentially, what Greece is being told is that, 'We don't trust you to do anything,'" says Nick Malkoutzis, deputy editor of the English-language daily Kathimerini.

He worries about the troika setting an agenda following a predetermined formula opposed by the majority of the population.

"You are essentially dictating a specific fiscal and economic policy to Greece without taking on board all the particularities of the situation," Malkoutzis says, "and that, in a sense, is nation-building, but in a very negative sense."

With a growing gap between rich and poor, and no prospects of economic improvement in the near future, there's growing fear in Greece of political instability and social tensions — the worst possible conditions for what some see as the first nation-building experiment ever attempted in democratic Europe.