Accessibility links
Betting On Two Pairs Of Filmmaking Brothers Two pairs of filmmaking brothers are both opening movies on the same weekend, and both films are about the awkwardness of growing up. Critic Bob Mondello says Jay and Mark Duplass' Jeff, Who Lives At Home and Jean-Pierre and Luc Dardenne's The Kid with a Bike share a common sense of humanity. 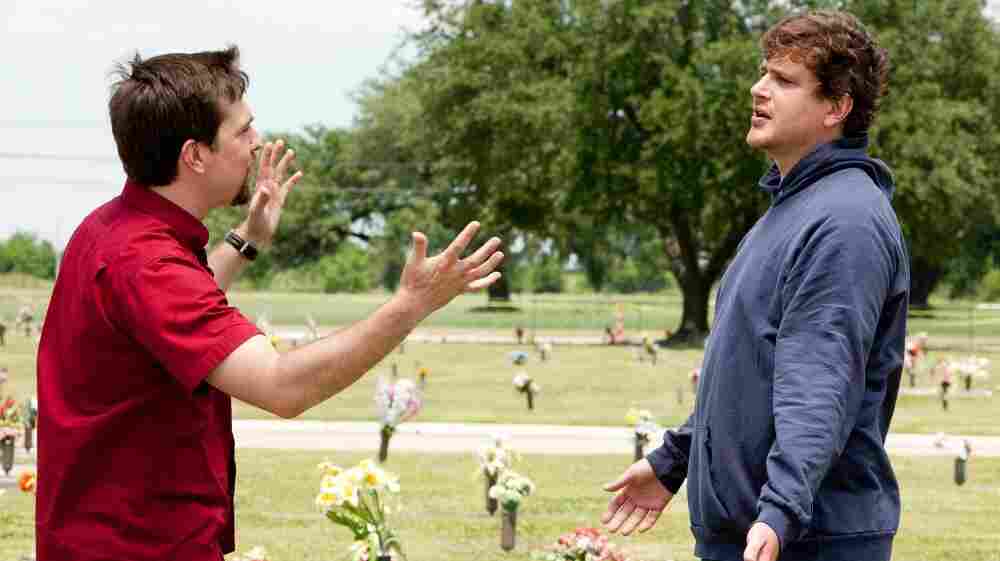 Two pairs of filmmaking brothers are both releasing movies this weekend. In Jeff, Who Lives at Home, by the Duplass brothers Jay and Mark, Pat (Ed Helms) and Jeff (Jason Segel) encounter each other in a day fraught with fateful events. Also opening is The Kid with a Bike, a Belgian slice-of-life drama from the Dardenne brothers, Jean-Pierre and Luc.. Paramount Vantage hide caption

Call it an accident of the calendar: two pairs of filmmaking brothers both opening movies on the same weekend, both films about the awkwardness of growing up. Jeff, Who Lives at Home is a post-mumblecore slacker comedy from the Duplass brothers, Mark and Jay. The Kid with a Bike is a Belgian slice-of-life drama from the Dardenne brothers, Jean-Pierre and Luc.

The Kid with a Bike begins with a kid without a bike. Eleven-year-old Cyril (somber newcomer Thomas Doret) has been unceremoniously abandoned at a state-run foster-care facility by a father (Jeremie Renier) who has left no forwarding address. Cyril figures his father must have cared enough about him to at least keep his bicycle safe, so he keeps running away to find it, and finally makes it to his former apartment, which is now empty. 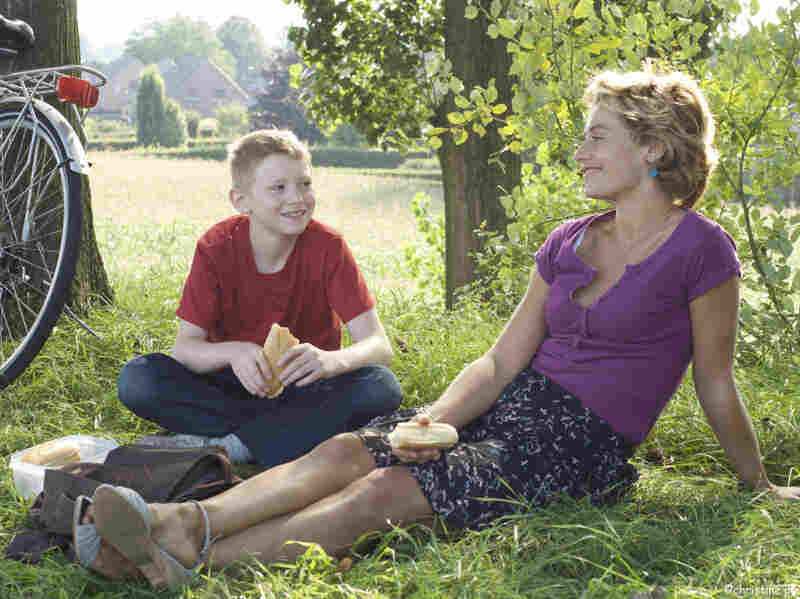 When the authorities come to take him back, he tackles a random bystander — Samantha — and clings to her, refusing to let go and wailing that he wants his dad and his bike.

Samantha, who's played unsentimentally by Cecile De France, is struck by this bereft, angry child. She finds out who Dad sold the bike to and buys it back. She later takes Cyril to find his father. And when Cyril asks, she even lets him stay with her on weekends.

Why does she do all this? An American filmmaker would feel obligated to give her an explanatory back story, but the Dardenne brothers, who tend not to explain much in their eloquently unforced pictures, are content to just let her help this needy kid.

The Kid With A Bike

That's not an easy task.

Jeff, Who
Lives At Home

Cyril's a wild child, furious at the world, convinced against all evidence that his father still cares. And when Dad disappoints, Cyril goes looking for father figures in truly terrible places. If you've seen other Dardenne brothers films — where, say, a drifter sells his girlfriend's infant on the black market, or a housing scam for illegal immigrants goes horribly wrong — it will worry you quite a bit when Cyril falls in with a neighborhood tough.

And while The Kid with a Bike finds its filmmaking siblings in what is, for them, an almost sunny frame of mind — they even use musical underscoring to ease a couple of transitions, a first for them — that's hardly the end of Cyril's troubles, or of his tough ride growing up.

The American Duplass brothers traffic in more whimsical down-to-earthiness — shambling, squirmy comedies about the awkward situations real people find themselves in. Jeff, for instance, is a 30-something slacker who — much to his mother's annoyance — still Lives at Home.

Jeff's a doughy, bong-tethered, M. Night Shyamalan-worshipping doofus as played by Jason Segel. Susan Sarandon is his mother, and Ed Helms his marginally more grown-up older sibling, Pat, who is employed and married (to Judy Greer).

That's a big-name cast for the Duplass brothers, who made their rep with low-budget flicks so deliberately scruffy they practically defined the "mumblecore" label. Jeff, Who Lives at Home has the same low-rent vibe as their earlier work and uses indie techniques to get at a need for family and love, in much the same way Kid with a Bike does. There's even an absent father for Jeff and Pat to idealize.

It's hard to escape the conclusion that Cyril is more grown up at 11 than these two will ever be. But this kid looking for his bike and these man-child brothers looking for direction are clearly on a similar journey — one that's infused with warmth by two pairs of filmmaking brothers.