Accessibility links
Confusion Wins In Missouri's 'Chaotic' Caucus Process Most of the state holds its caucuses Saturday morning, but the first one in Barry County was a messy event. More than 250 people showed up, many planning to vote directly for the candidates. That was not to be. 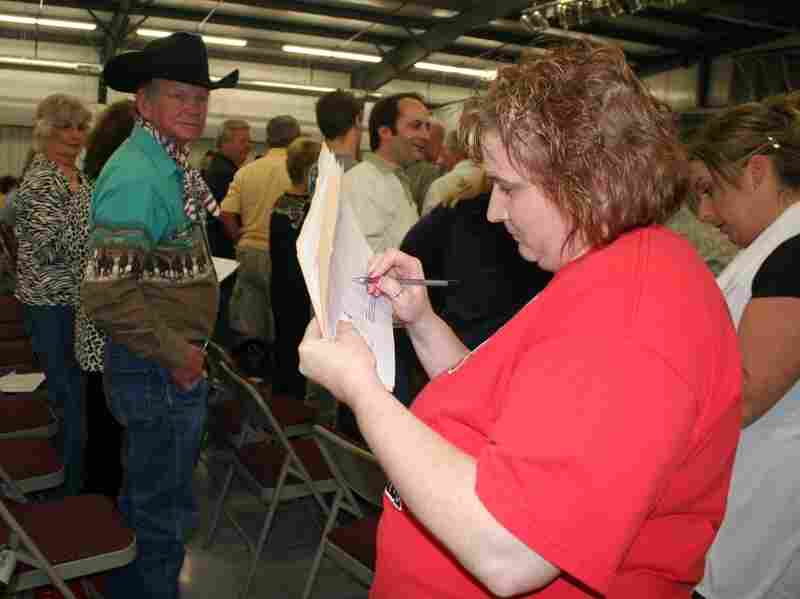 Women count votes at the GOP presidential caucus in Barry County, Mo., on Tuesday. At this and other caucuses held in the state Saturday, voters selected delegates to go to the district and state conventions. Frank Morris/For NPR hide caption 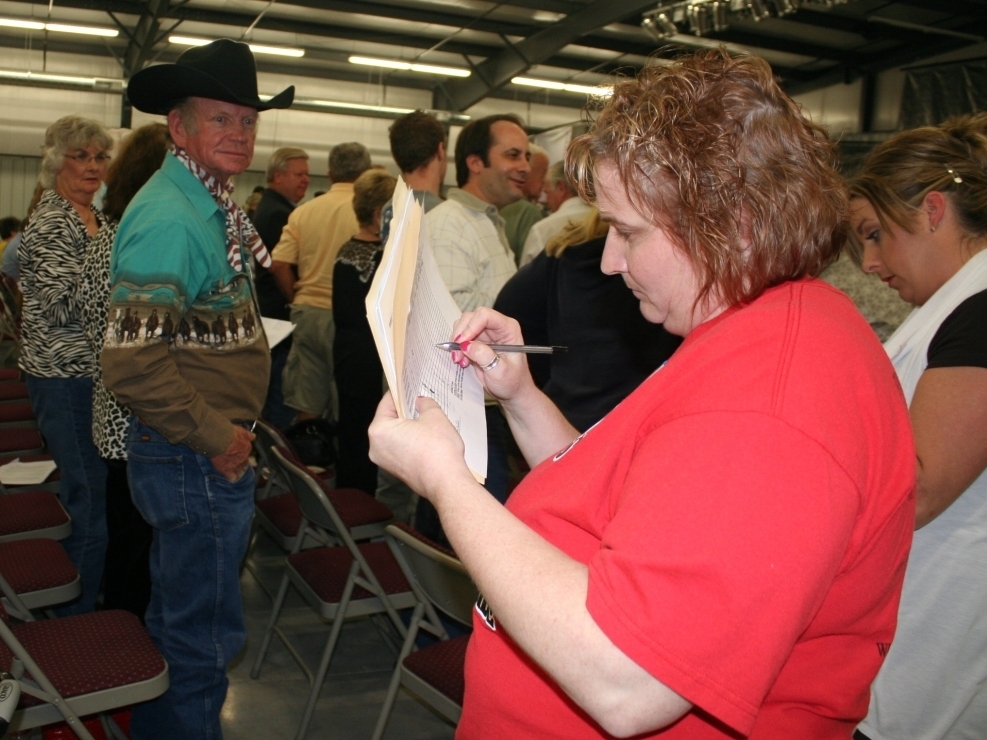 Women count votes at the GOP presidential caucus in Barry County, Mo., on Tuesday. At this and other caucuses held in the state Saturday, voters selected delegates to go to the district and state conventions.

Cassville, Mo., is a little town on the edge of the Ozark Mountains. During the Civil War, the Confederate state Legislature convened here. Tuesday, the Republican presidential caucus was the big draw. Most of the rest of the state holds its caucuses today.

The first caucus was a messy process. More than 250 people showed up, most planning to vote directly for the candidates. That was not to be.

David Cole, the chairman of the Missouri Republican Party, told caucusgoers that they would be voting on delegates to attend district and state conventions. Those meetings are weeks from now, where Missouri's actual voting delegates will be decided. The delegates picked in this caucus won't be bound to any particular candidate, and they have to be elected in slates.

The county GOP happened to have a slate prepared, as did the Tea Party. But most folks were blindsided by the rules. Cole apologized to the angry crowd that they weren't aware of the process.

The confusion is understandable. The rules for these caucuses are different from county to county. Here in Barry County, only party activists had seen them beforehand. Frank Hubert, a robust 80-year-old in a blue blazer and tie, was one of many to stand up and vent.

"What we have had happen tonight is totally unacceptable, and it is a de facto railroad job," he said.

As tempers flared, it was clear the room was sharply divided between Tea Party supporters and traditional Republicans. Some likened the caucus to Congress. Ralph Kelley, a retired engineer backing Newt Gingrich, stepped out for a smoke.

"I think that we should vote the Tea Party out of the Republican Party," he says.

"I think it's a joke. I think every bit of this is a joke," says Teresa Petty, a Ron Paul supporter.

The frustration is well understood 60 miles away, in the sunny offices of the Political Science Department at Missouri State University.

"The process is chaotic. I think one word we could use is 'bizarre,'" professor George Connor says.

On top of that, he says, Missouri Republicans have already voted in a presidential primary this year, back in early February.

"We had a primary, which became a beauty contest. A million-dollar primary that didn't count for anything," he says.

Missouri Republicans decided to hand out delegates via a caucus system this year, but deadlocked with Democrats over striking the primary from the calendar. Rick Santorum won the nonbinding primary vote, but no delegates were chosen. The caucuses will do that, eventually.

Back in Cassville, the Barry County Republican Party's slate won this caucus. That means the delegates from this steadfastly conservative county will probably back Mitt Romney in district and state conventions over the next couple of months. It will be at least that long before anything like a winner emerges.

Despite the byzantine nominating process, opposition to President Obama still unites the Republicans of Barry County.