Accessibility links
Convicted Nazi Camp Guard John Demjanjuk Dies John Demjanjuk, the retired U.S. autoworker convicted on 28,060 counts of being an accessory to murder, died Saturday at the age of 91. Demjanjuk died a free man in a nursing home in southern Germany, where he had been released pending his appeal. 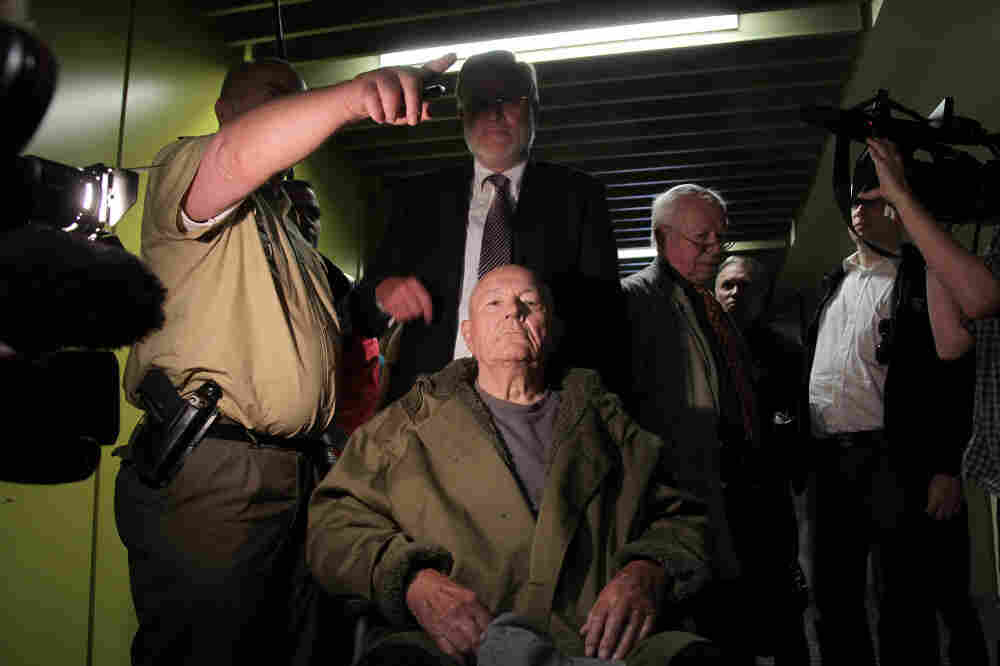 John Demjanjuk emerges from the courtroom with his lawyers after a judge sentenced him to five years in prison for charges related to 28,060 counts of accessory to murder in May 2011 in Munich, Germany. Johannes Simon/Getty Images hide caption 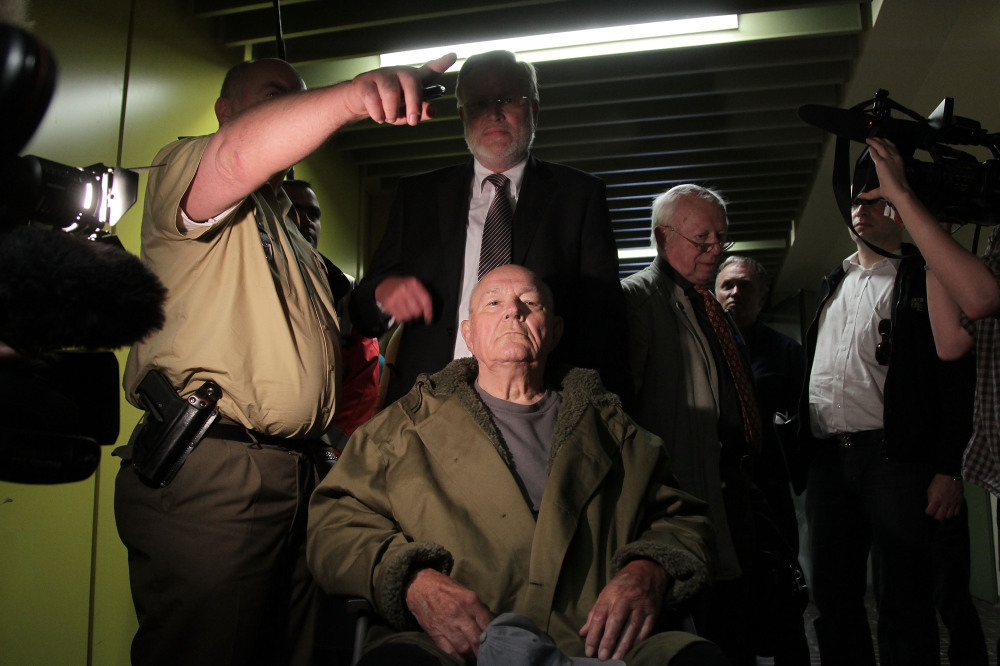 John Demjanjuk emerges from the courtroom with his lawyers after a judge sentenced him to five years in prison for charges related to 28,060 counts of accessory to murder in May 2011 in Munich, Germany.

John Demjanjuk, the retired U.S. autoworker convicted of being a guard at in an infamous Nazi death camp, died Saturday at the age of 91. Demjanjuk died a free man in a nursing home in southern Germany, where he had been released pending his appeal.

Convicted in May on 28,060 counts of being an accessory to murder, Demjanjuk was the central figure in one of the longest running legal cases against an alleged Nazi war criminal. Prosecutors in the U.S., Israel and Germany spent more than three decades trying to prove that he helped herd thousands of victims to their deaths as a prison camp guard in Poland. Family and friends claim that Demjanjuk himself was the victim of mistaken identity, though Nazi hunters say the former Clevelander was at the top of their most wanted list.

Demjanjuk spent the last third of his life denying charges that he was a Nazi war criminal. Until the mid 1970s, the Ukrainian immigrant had lived a quiet life in suburban Cleveland. Then came accusations from several Holocaust survivors that he was a notorious guard at the Treblinka extermination camp in Poland during World War II.

"The issue is very simple: John Demjanjuk was definitely a death camp guard," says Marvin Hier, founder of the Simon Wiesenthal Center, a Los Angeles-based Jewish human rights group. Hier has little patience for those who questioned why an octogenarian was put on trial for alleged crimes that occurred 65 years ago.

"He lived to a full, ripe old age to enjoy his children and grandchildren. He attended their birthdays, their wedding celebrations," Hier says. "None of his victims had that privilege; they went directly to the gas chambers."

Ivan The Terrible Or Not?

In 1986, the cameras focused on Demjanjuk in the back of an Israeli prisoner transport vehicle. The newspapers had labeled him as "Ivan the Terrible." He leaned toward the white wire mesh screen that separated him from the reporters to argue otherwise.

Yet two years later, Demjanjuk was tried and convicted in Israel on war crimes charges. He was sentenced to death by hanging. Demjanjuk attorney John Gill says his client just wasn't the man they thought he was.

"When you were in the trial, you could see that the focus was that it was just a horrendous, horrendous killing of people, and therefore there had to be a punishment for it," Gill says. "The trouble is, it was the wrong person."

Demjanjuk won a reprieve before his death sentence could be carried out, thanks largely to the breakup of the Soviet Union. Old war records were released that indicated someone else had been Ivan the Terrible. War crimes scholar Michael Scharf says this revelation led the Israeli Supreme Court to reverse Demjanjuk's conviction in 1993, sending him back home to Cleveland.

"So, the Soviet Union actually ended up saving his life from the death penalty," Scharf says. "But, those same documents suggested that he was, in fact, a guard." A guard at a different Nazi death camp in the Polish village of Sobibor, near the Ukrainian border.

During the four months in 1943 that Demjanjuk is said to have been stationed at Sobibor, around 28,000 people were killed. Based on the new evidence, in 2009, federal officials deported Demjanjuk for a second trial, this time in Germany.

Questions about the "real" John Demjanjuk remained until the end. Critics claimed Demjanjuk was acting the part of a sick, feeble old man to gain sympathy. His supporters countered that the Munich proceedings were a show trial Germans put on to assuage a national sense of collective guilt.

Scharf says the Demjanjuk case was probably the last major Nazi war crimes trial. While Scharf doesn't doubt Demjanjuk's guilt, he does have some sympathy for the man at the center of it all.

"I think Demjanjuk is a tragic figure. I think that maybe he was recruited involuntarily, fell into a situation that was not his choice, got involved with horrible things. And then spent the rest of his life as a model citizen trying to atone for that," Scharf says. "But, at the end of the day, justice caught up with him."