Accessibility links
'A Salesman' Lives On In Philip Seymour Hoffman Hoffman takes on the role of beleaguered salesman Willy Loman in Arthur Miller's 63-year-old classic. Over the last six decades, in times of both economic boom and bust, the Pulitzer Prize-winning play has resonated with generations of theatergoers.

When Philip Seymour Hoffman took the stage on March 15 in the new revival of Arthur Miller's Death of a Salesman, he became the fifth actor in 63 years to walk the boards of Broadway in the shoes of the blustery, beleaguered salesman, Willy Loman. In the last six decades, each incarnation of the play has resonated with a new generation of theatergoers.

There are lines in Arthur Miller's 1949 masterpiece that sound like they could have come right out of the Occupy Wall Street movement. Miller knew plenty about the characters on Wall Street. He was born in the Bronx in 1915 to a wealthy family. Then his father lost everything in the stock market crash of 1929. Seventy years later, at his home in Roxbury, Conn. — not far from the cabin where he wrote Death of a Salesman — Miller told me the seeds of the play grew out of the Depression. 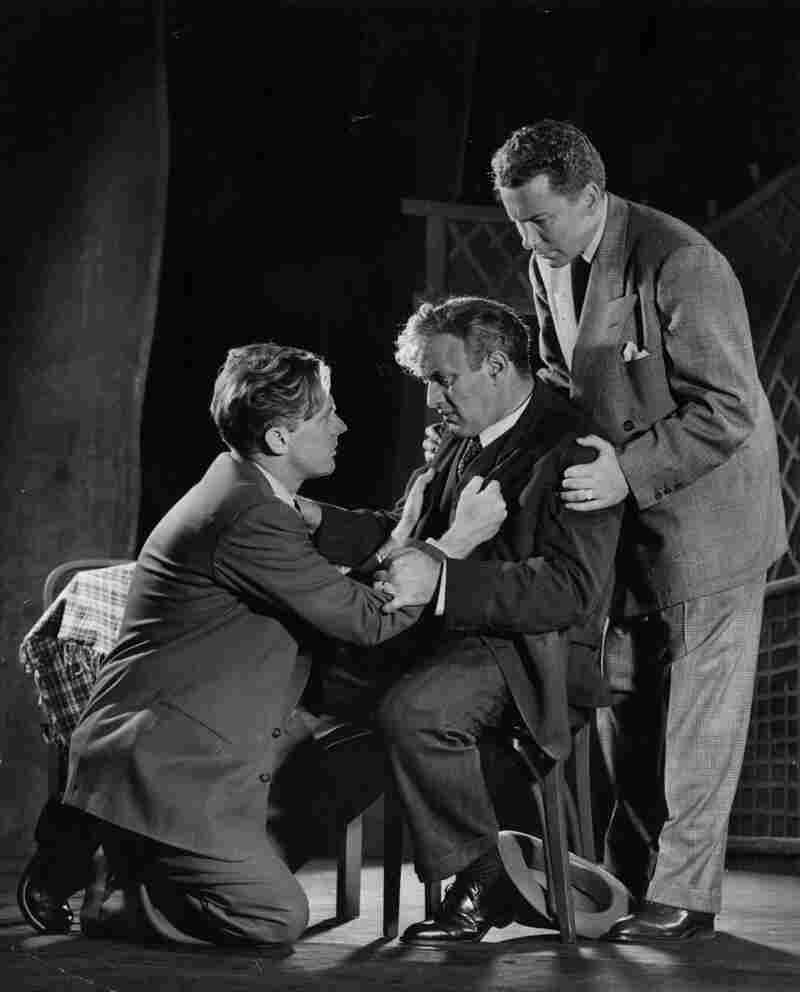 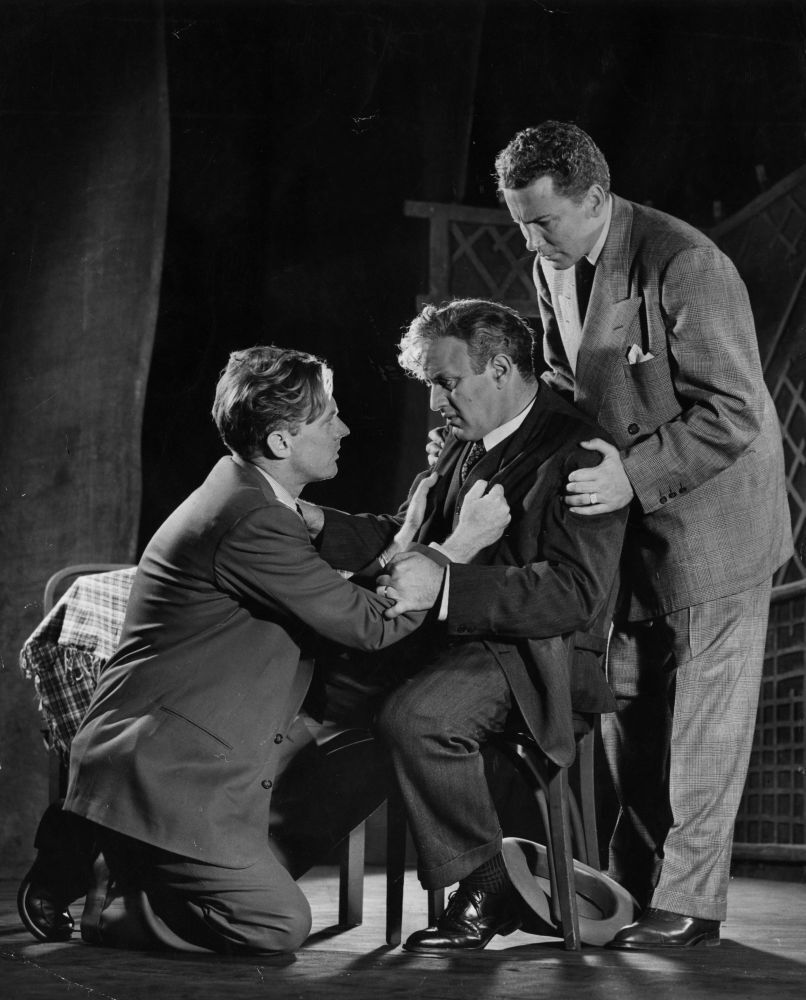 Lee J. Cobb (center) starred in the original, 1949 Broadway production of Death of a Salesman.

"I wrote it in '48, '47, which was objectively the start of the biggest boom in the history of the world probably," Miller said. "But it was also a time when a lot of people, including me, expected that we were going to go back into what we had been before World War II, which was a depressed country. Harry Truman thought the same thing. ... Most of the population was waiting for the other shoe to drop."

Miller never tells us what Willy Loman sells. But the playwright makes it clear that his character is at the end of his career, and end of his rope. As the play opens, Loman's salary has been cut and he doesn't know how he's going to pay his bills. Then, in the wrenching second act, his boss fires him.

"I put 34 years into this firm Howard, and now I can't pay my insurance!" Loman says to his boss. "You can't eat the orange and throw the peel away! A man isn't a piece of fruit."

The 1949 play could not be more timely today, says New York Times theater critic Charles Isherwood. "We've come through this very painful recession," he says. "And the main character is a man who's devoted his life to this company for 34 years, and suddenly finds himself not only drowning in debt, but ultimately, tossed out on his ear. ... I think that's something that a lot of people can relate to right now, unfortunately."

More On 'Death Of A Salesman'

An Appreciation of Playwright Arthur Miller

An Appreciation of Playwright Arthur Miller

But audiences have always related to the plight of Willy Loman. The first Broadway revival was staged 26 years after the premiere.

"It's one of the great classic pieces of all time for my money," said the late George C. Scott, who directed and starred in Death of a Salesman in 1975. Time magazine called Scott's Loman "a performance of staggering impact. ... When his head is bowed, it is not in resignation, but like that of the bull bloodied by the picador, yet ready to charge again."

In 1999, Scott said the role took a lot out of him. He was in his late 40s, playing a man of 63. It was one of the "most exhausting" roles, Scott said: "You want to do things that are good, things that are positive. ... It is a very, very saddening occasion to do that play. To do it night after night after night can break down your optimism of life."

Isherwood says the play also had a countercultural resonance in 1975. "The idea that the American dream is achievable for everyone, the idea of the American dream as defined by being No 1, or being all-powerful is something to be achieved, and ... strived for constantly. I think in 1975, after Watergate and Vietnam, I think there was probably a strain in the culture that was ready to take another look at these kinds of ideas." 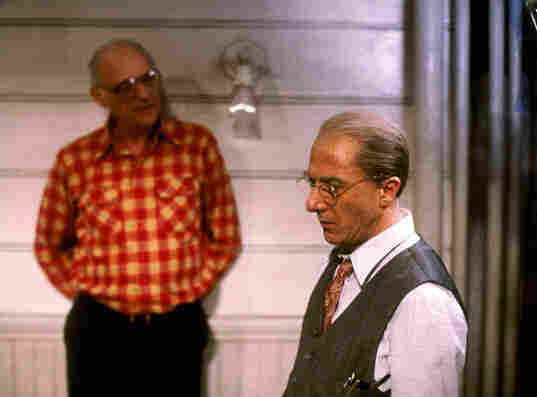 Playwright Arthur Miller (left) on set with Dustin Hoffman, who played Willy Loman on Broadway in 1984, and in a CBS Television adaptation of Miller's play in 1985. Hulton Archive/Getty Images hide caption 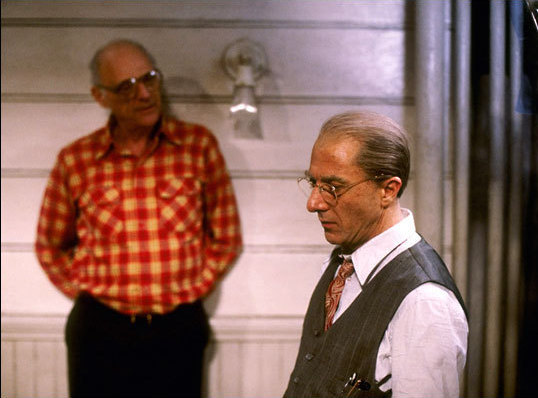 Playwright Arthur Miller (left) on set with Dustin Hoffman, who played Willy Loman on Broadway in 1984, and in a CBS Television adaptation of Miller's play in 1985.

In 1984, Broadway took another look at Death of a Salesman. Dustin Hoffman played Willy Loman — a man who has spent a lifetime "on a shoeshine and a smile," striving to succeed by virtue of being well‑liked — and half a lifetime drilling those values into his two sons. Willy's son Biff was played by John Malkovich.

One reason the play has struck a chord with each succeeding generation is that it's so familiar. For more than half a century, Death of a Salesman has been required reading in high school English classes. Hoffman says it was the first play he ever read.

"Before I even thought of being an actor," Hoffman says, "I was in high school, and [the play] destroyed me, because I had an older brother. I had a father who was a traveling salesman. So the dynamics was very close to what I had experienced in my life up to that point. And I was actually in mourning for weeks after I read the play. Refused to tell my parents why I was so sad because I was afraid it would hurt them."

Even in the prosperous times — during the Reagan-Bush economic boom of the 1980s — the play again resonated with audiences, says Isherwood.

"The idea that a man's value is measured by how big his paycheck is is something that we always should be questioning," he says, "even in times of success. In fact, you know, when things are going well, it's maybe even more important to look at these kinds of issues." 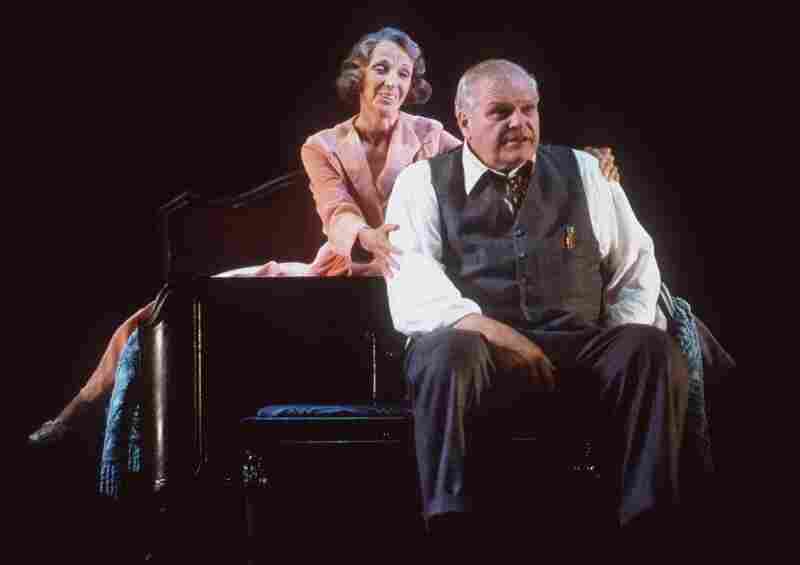 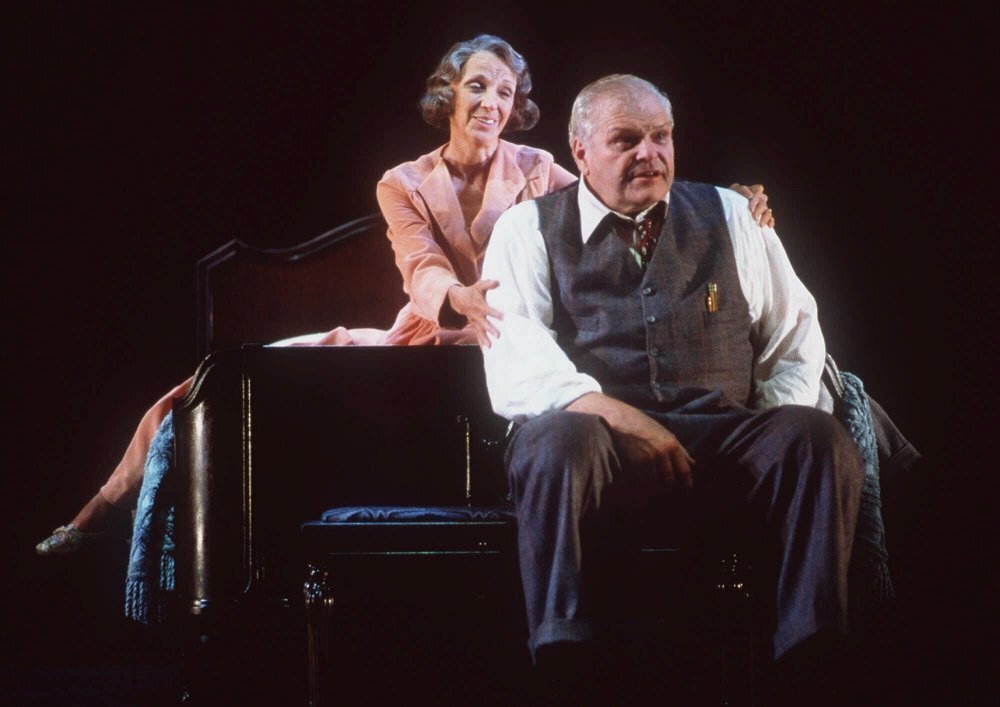 Brian Dennehy and Elizabeth Franz starred in the 50th anniversary Broadway production of the play in 1999.

The 50th anniversary Broadway production of Death of a Salesman was staged during the economic upswing of the '90s' dot-com boom. And again, the play proved prescient. Brian Dennehey played Willy Loman in 1999 — the production was a hit. But Arthur Miller said he never set out to write a popular play. He guessed that Death of a Salesman struck an emotional chord with audiences across the decades because of the central human dilemmas it explores.

"The family; the relations of fathers and sons; of wives and husbands; of man to his economy and his job; aging; the anomie that this system generates, where people simply get separated from themselves, and they don't know why they're alive, et cetera," Miller said. "It seems to have cracked the rock right down the middle."

Miller died in 2005. There's a painful irony to the current revival of his Death of a Salesman — the people the play speaks to most powerfully can't afford to spend $120 on a ticket to see it on Broadway.