Accessibility links
Grieving Afghan Father: 'All My Dreams Are Buried' Many details have emerged about the American soldier suspected of gunning down 16 Afghan civilians in Kandahar province. But little has been reported about those who were killed or the five still recovering. One Afghan farmer lost nearly his entire family in the attack. 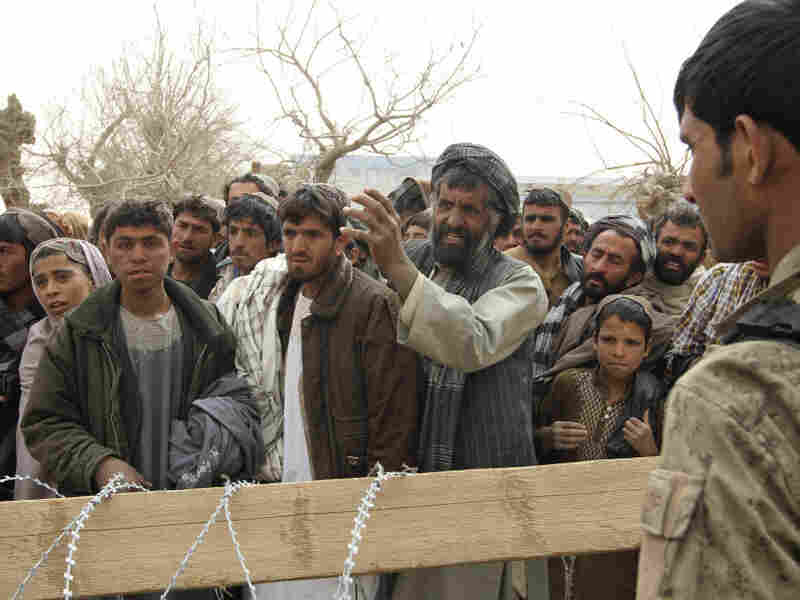 Afghans gather outside a military base in the Panjwai district in Afghanistan on March 11, after 16 civilians were killed in a massacre allegedly carried out by a U.S. soldier. Allauddin Khan/AP hide caption 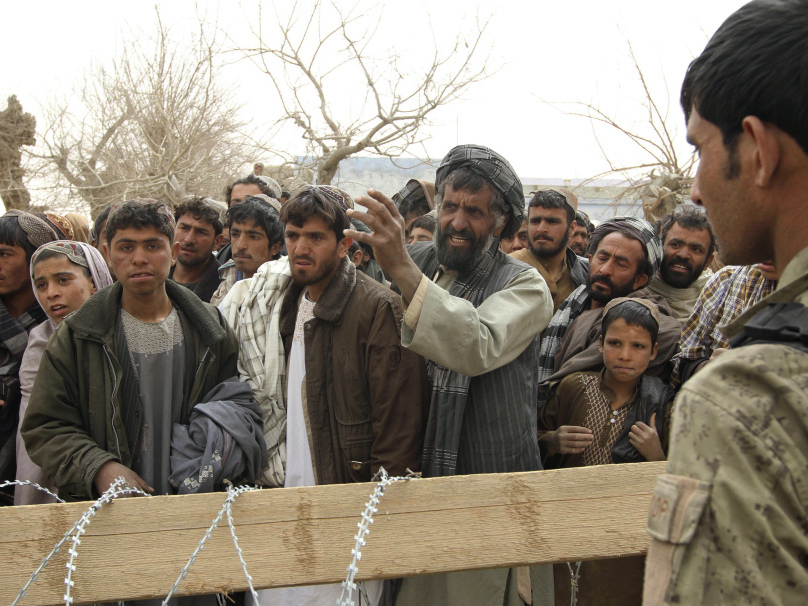 Afghans gather outside a military base in the Panjwai district in Afghanistan on March 11, after 16 civilians were killed in a massacre allegedly carried out by a U.S. soldier.

Afghans say they're so inured to civilians killed in wars that they bury their dead and move on. That's not so easy for Muhammad Wazir. He lost his mother, his wife, a sister-in-law, a brother, a nephew, his four daughters and two of his sons in last week's mass shooting in two villages.

"My little boy, Habib Shah, is the only one left alive, and I love him very much," says Wazir.

The boy cried next to his father as Wazir spoke by cellphone. The 4-year-old is his favorite, Wazir says, and that's why he took the boy as he traveled to the eastern side of Kandahar province last week. While they were away, tragedy struck their tiny mud brick village in Panjwai district, southwest of Kandahar City.

Like anyone, I wanted my children to be doctors, engineers — important people. All my dreams are buried under a pile of dust now.

Public records and military sources have provided a clearer portrait of the man who allegedly slaughtered 16 people in the night. U.S. Army Staff Sgt. Robert Bales had financial troubles. He played football in high school. His war buddies thought he was cool under fire. His neighbors liked him. His wife kept a blog. Bales had sustained previous injuries that might trigger post-traumatic stress disorder.

Afghanistan — especially in rural villages — keeps few records of births and deaths. Most of the victims were young and illiterate and left only stunned relatives and friends behind. Panjwai district was dangerous before the massacre and is now considered off-limits to foreign and even Afghan journalists.

Wazir, 35, says he can hardly describe the pain of returning home to find his entire family gone.

"As a parent, you hate to see even your child's little finger hurt. Imagine losing 11 members of your family at once?" he says.

His oldest boy, Ismatullah, had just started to grow soft whiskers when he died. At 14, he was tall and strong, turning handsome, his father says. He was in elementary school about five years ago when fighting erupted and all the schools closed. Like other boys in the village, Ismatullah joined his father in the fields, as their district became one of the biggest killing fields of the Afghan war.

Every day after prayers and breakfast, Ismatullah worked with his father in the fields until noon. Then he could go play, Wazir says. The teenager especially liked an Afghan game called Tup Danda — a bit like baseball.

Faizullah, the next oldest, was about 8 when he died. Wazir admits the boy was a little spoiled, with no school to attend and still too young for farm work. Faizullah loved to ride a bicycle around the village, and whenever he could, he would grab his father's cellphone to play the games on it.

Also shot, stabbed and burned was Wazir's brother, Akhtar. He was about 21 years old and had just married. He had no children yet.

"Like anyone, I wanted my children to be doctors, engineers — important people. All my dreams are buried under a pile of dust now," Wazir says.

Men from Kandahar don't traditionally talk about their wives or daughters in public, and certainly not to the media. Wazir's daughters were 12, 8, 3 and 2 years old. Their names were Massoma, Farida, Palwasha and Bibya. His 60-year-old mother, Shakarina, also was killed, along with his wife, Zahra.

"I loved them all like they were parts of my body," Wazir says. "I miss all of them terribly."

Five other men and women were killed in a different village; NPR could not reach family members to confirm the victims' names. Five survivors were receiving treatment at the U.S. military hospital at Kandahar Airfield.