Accessibility links
Ringing In Norouz, A Time For Family And Good Eats For Iranian-Americans and for others from the Middle East, Central and South Asia, the first day of Spring is also Norouz, the beginning of a New Year. 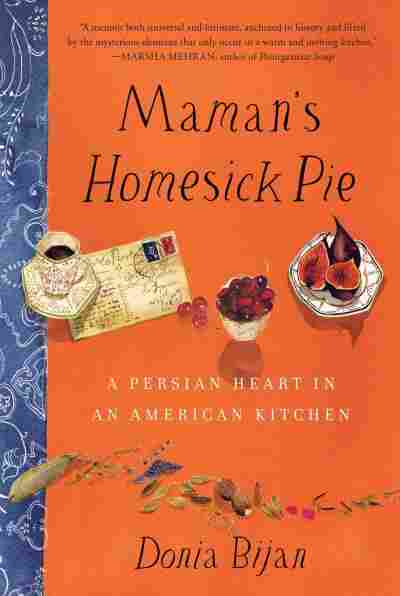 A Persian Heart in an American Kitchen

It's the first day of spring, and for most people, that means, longer days outside, getting out the garden tools, and the beginning of barbecue season. But for Iranian-Americans and for others from the Middle East, Central and South Asia, today is the beginning of a New Year.

The holiday is called Norouz. In Persian, it literally means a "new day." It's seen as a time of rebirth and renewal, and like most holidays, Norouz is all about spending time with family, and eating lots of great food.

Chef and author Donia Bijan was born in Iran, but came to the United States as a teenager. In her book, Maman's Homesick Pie, Bijan describes memories of her mother's cooking, as well as, garden parties in their Tehran home with elaborate meals, and classical Persian musicians playing in the background.

Bijan calls her book a love letter to her mother, who is now deceased.

In an interview with NPR's Michel Martin, Bijan talks about her many attempts to recreate the rituals, traditions and cuisine of Norouz for her ten-year-old son. She says she didn't pay close enough attention to her mother's cooking while she still had the chance.

Like so many Iranian-Americans, Bijan says, "I myself, for too long, relied on my mother to carry the tradition of Norouz."

Part of that tradition includes a dish of herb rice and smoked fish. Bijan swears by her mother's recipe that folds parsley, cilantro, dill and leeks in layers of orange zest, cinnamon and saffron.

She says the hardest part of making this rice is chopping the herbs. "It certainly teaches you that good cooking does require a lot of patience," says Bijan.

For the fish, Bijan relies on techniques she learned from her intensive training at Le Cordon Bleu, the premier French culinary school. To create the smoky flavor --- without the help of a meat smoker --- she marinates the fish in salt, sugar and tea leaves for two days. 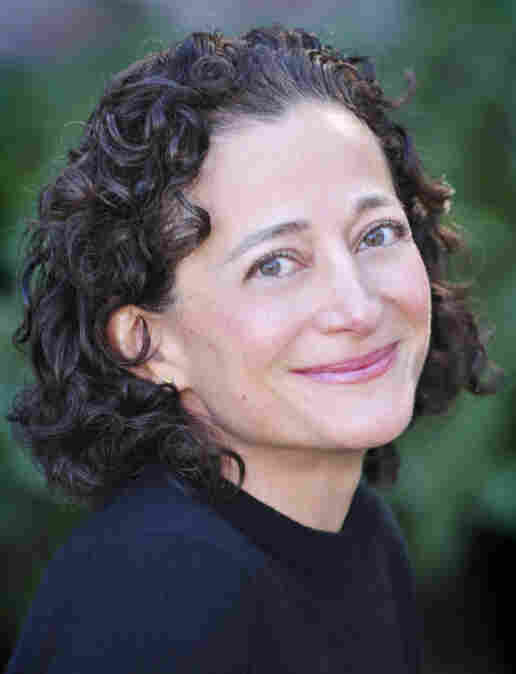 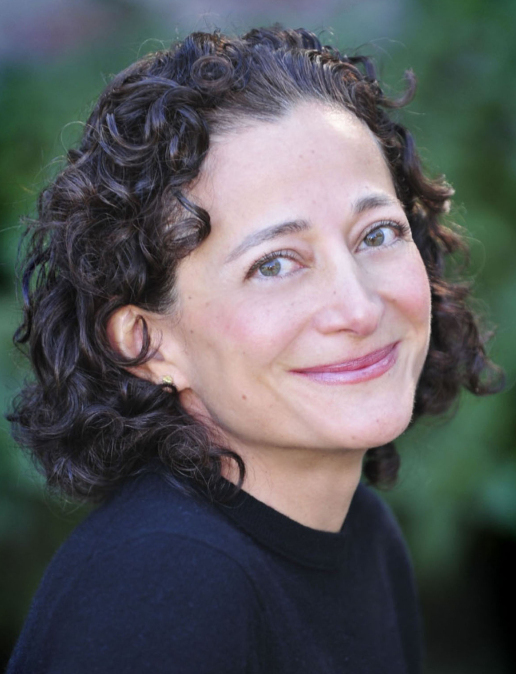 Bijan says her mother not only influenced her own cooking, but she nurtured Bijan's passion for food from a very young age.

"I was an awkward little girl who found grace in the kitchen," says Bijan. "She [my mother] never shooed me away, [she] didn't say, 'oh go outside and play.' She always gave me a task and expected me to follow through."

For many Iranian parents of that generation, Bijan says, cooking wasn't considered a proper profession. But Bijan's mother insisted that she go to France — to go to the source if she wanted to learn to cook well.

Her mother even took-on a graveyard shift at the hospital, where she worked as a nurse, so that she could pay for Bijan's tuition at Le Cordon Bleu.

She describes her mother's pride when Bijan finally opened her own French bistro in Palo Alto, California.

"She [my mother] would come and bring her friends and boast about her daughter," Bijan says. "She would clip all the little reviews and she had a scrapbook."

Today, Bijan says her French culinary training and her Persian heritage collide on a daily basis. But she enjoys the struggle, and she says food is the perfect way to travel between two cultures.

This recipe came from Bijan's mother and folds parsley, cilantro, dill and leeks in layers of orange zest, cinnamon and saffron. The chopping of the herbs "teaches you that good cooking does require a lot of patience," Bijan says. 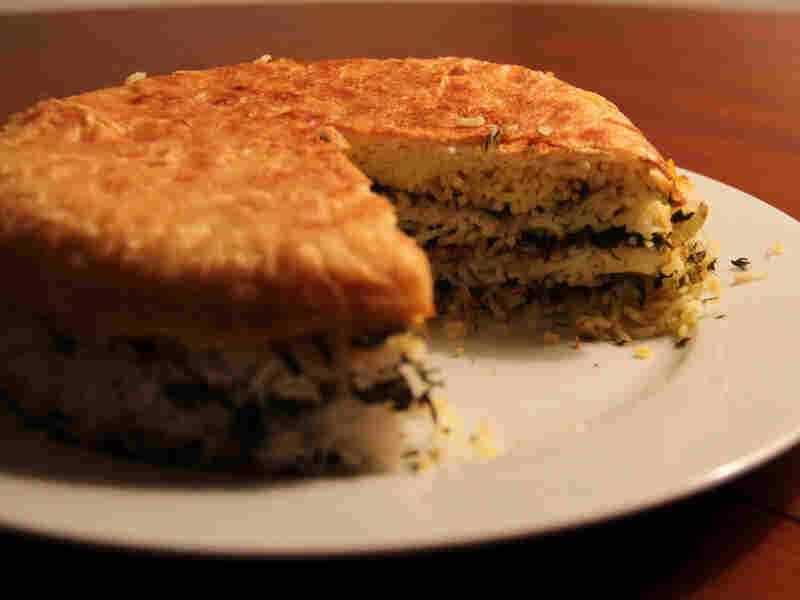 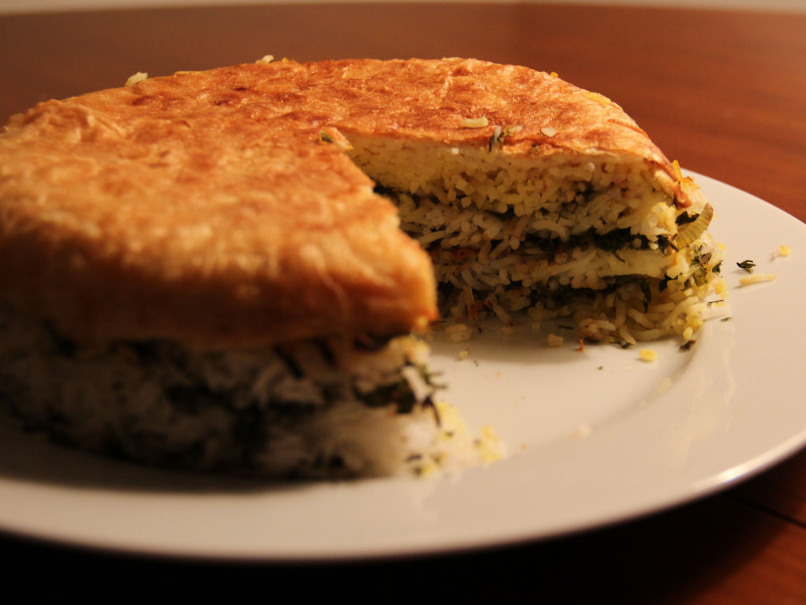 1 piece of lavash or a flour tortilla

Wash and drain the rice. Soak with a tablespoon of salt for 2-3 hours.

Rinse the cilantro, parsley, and dill. Use a salad spinner to dry the herbs and chop finely.

Wash and trim the leeks, cutting them in half lengthwise. Blanch in boiling, salted water for 3-4 minutes until tender, drain and rinse with cold water. Pat dry.

Bring 2 quarts of salted water to a boil in a non-stick pot. Drain the rice and pour into the pot to blanch for 6 minutes. Stir once or twice with a wooden spoon to loosen the grains that may stick to the bottom. Drain the rice in a colander.

In the same pot, melt 3 tablespoons of butter with 1/3 cup water. Place the lavash or tortilla over the butter to fit snugly on the bottom of the pot. Add two spatulas of rice, one spatula of fresh herbs, a teaspoon of orange zest, a sprinkle of cinnamon, half a leek and a clove of garlic. Repeat while alternating layers of rice, herbs, garlic, leeks, orange peel, and cinnamon in a pyramid shape, ending with a layer of rice. Cover and cook over medium heat for 8 minutes.

Remove the lid and pour the saffron water and the remaining butter over the pyramid.

Wrap the lid in a dishtowel and place over the pot to cover firmly and avoid steam from escaping.

Cook the rice over medium-low heat for 45-50 minutes.

To serve, you can invert the rice onto a platter, or use a spatula to mound the rice on your serving platter and carefully remove the crust to serve on the side.

Bijan adapted this recipe using techniques she learned at Le Cordon Bleu. Marinating the fish in salt, sugar and tea leaves for two days creates a smoky flavor without the help of a meat smoker. 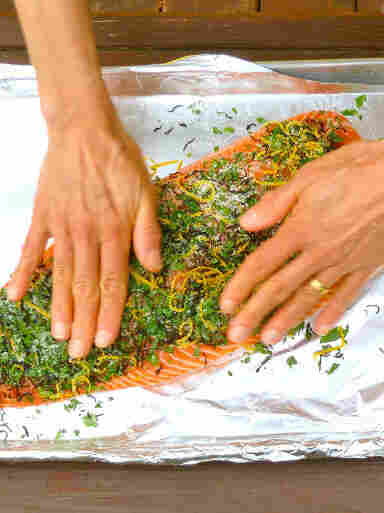 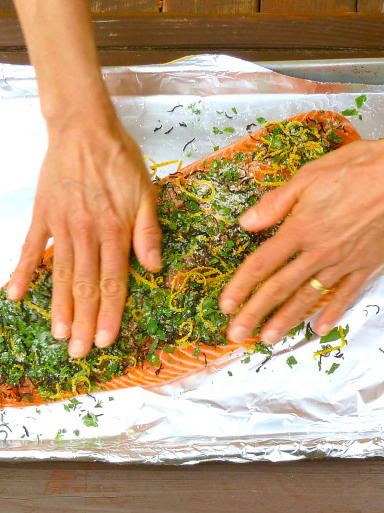 Two days before serving, toss the salt, sugar, tea leaves, tarragon, orange zest, and shallot in a bowl. Lay the salmon on a long piece of foil. Rub the salt mixture on both sides of the fillet. Lay another piece of foil on top and neatly seal the edges. Place a weight on the fish, the equivalent of 5 to 6 pounds (6 cans on a tray will do; 2- or 3-pound hand weights work well, too) and refrigerate for 48 hours.

Rinse away the herb and tea mixture under cold running water. Pat the fish dry with paper towels, brush with olive oil and lemon juice. The salt and sugar marinade has partially cooked your salmon so grill or broil no more than 2-3 minutes for a tender, flaky fish to serve with your herb rice.