Accessibility links
White House Girds For Supreme Court's Health Care Decision The U.S. Supreme Court hears oral arguments about the Affordable Care Act next week. The White House is gearing up to defend the policy across the country, but officials aren't talking publicly about what might happen if all or part of the law is struck down. 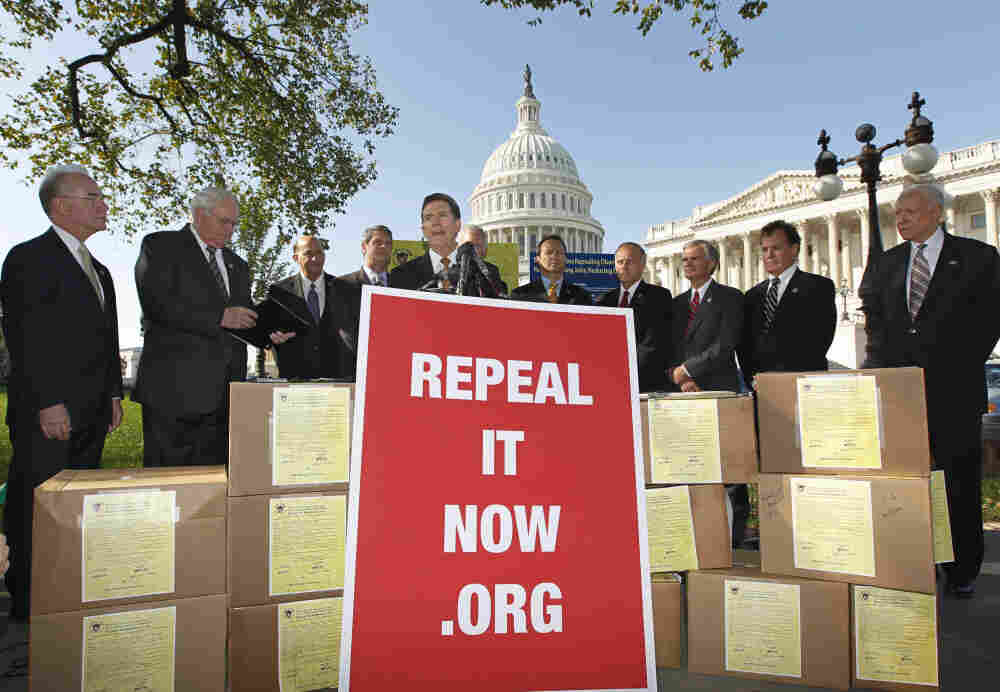 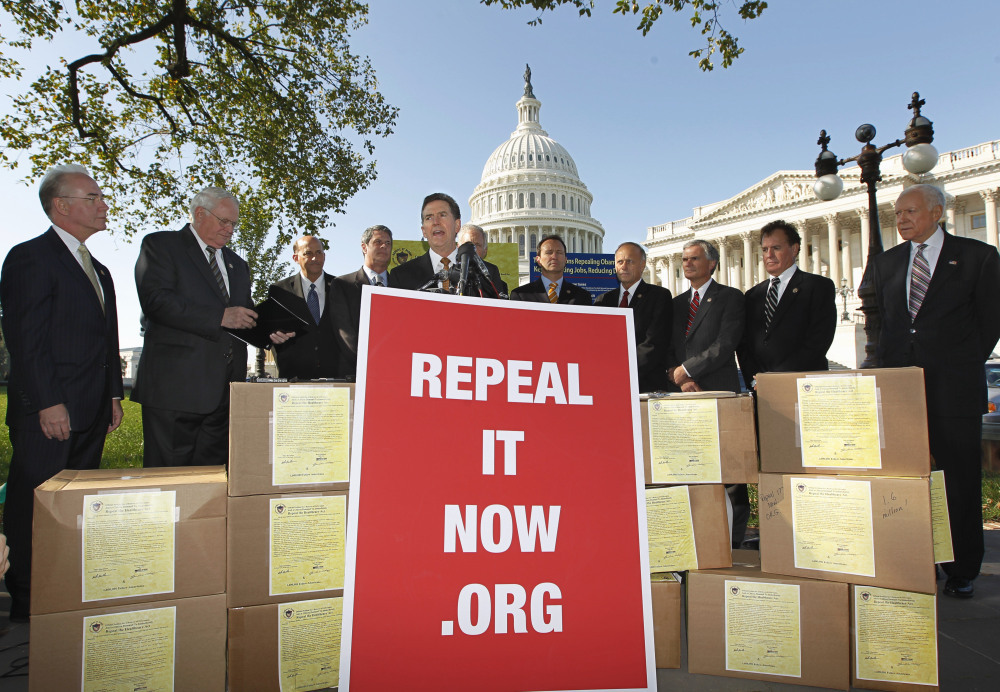 Most of the president's speeches these days focus on jobs or gas prices. But the health care law is his signature achievement, and it always gets a mention at political events.

"Change is health care reform that we passed after a century of trying," President Obama said to cheers and applause from the audience at a recent fundraiser in New York.

The law will be back in the spotlight next week when the U.S. Supreme Court hears oral arguments about the Affordable Care Act. The White House is gearing up to defend the policy, sending top administration officials out across the country to explain the law's benefits. The focus this week is on women, who are key health care consumers and an all-important demographic for the president's re-election bid.

The Obama campaign organized dozens of phone banks on Monday night, including one in Coatesville, Pa., where volunteers called voters to remind them about the law.

"We find that a lot of people do not understand what it is," says volunteer Harriet Smith. "So we are going to try and explain that to some people tonight."

In polls that ask voters about "health care reform," the public looks equally divided. Polls that refer specifically to the Obama health care law show more negative results. Republican pollster Bill McInturff says one thing all the polls show is that intensity is still with the law's opponents — twice as many people strongly oppose the law as strongly support it.

"Those dynamics have been consistent for the last couple of years," he says. "And going forward, though, that is a very different dialogue about how people feel about whether the bill should be repealed."

And with the Supreme Court about to review the law, the politics of health care get a lot more complicated.

So is the White House making contingency plans in case the court strikes down all or part of the law?

"No, because we're confident that the law is constitutional and that we're going to be upheld by the Supreme Court," says Nancy-Ann DeParle, White House deputy chief of staff.

Behind the scenes, administration officials are gaming out different scenarios and thinking about what to do and say if the court strikes down the whole law or just the individual mandate, its least popular and most important provision. There's no doubt a ruling against the health care law — if it came during the presidential campaign — would be seen, initially, as a huge victory for Republicans. As someone close to the president put it, any time you have "major blow" and Obama's name in the same sentence, it's not a good thing.

Deputy Obama campaign manager Stephanie Cutter says she doesn't want to talk about what the court might do.

"I will say this about the individual mandate," she says. "It's about people taking responsibility for their own health care," she says. "If the individual responsibility provision under the president's health care reform law went away, then that ban on insurance companies discriminating against people with pre-existing conditions would have to go away."

That ban is very popular. That's why, McInturff says, it's possible that even a negative Supreme Court decision might not hurt the president — at least not with the groups where insurance rates are lowest or costs are highest – African-Americans, Hispanics, young voters and women.

"In a world where that coverage could be at risk, I think in a kind of unintended consequence sort of way, it could put the president in the position of being back on the side of arguing for coverage on behalf of his core political constituency in a way that might actually quite animate them as we head into a campaign," McInturff says.

It could have the opposite effect on the president's opponents, shaking some of their enthusiasm. Democratic strategist Geoff Garin says if the mandate is overturned, it could make life more difficult for Republicans.

"If we end up with a split decision where the court overturns the individual mandate but allows the rest of the law to stand in effect, what do the Republicans say at that point?" Garin asks. "Let's get rid of all of the good things?"

Things like popular provisions that allow young people to stay on their parents' policies until they turn 26, or help seniors pay for prescription drugs. The Republican battle cry on health care has been "repeal and replace." But they've said very little about what they would put in its place if the law were repealed. The bottom line, says McInturff, who has spent years on complicated public policy issues like health care, is that voters don't always react the way they say they will.

"There may be others who want to predict how folks are going to react based on what the Supreme Court does," McInturff says. "Me at my pay grade, I would be enormously cautious."

That's why the White House, the Obama campaign, the Republicans and the Supreme Court are all heading into uncharted political territory as the health care law comes up for review.

How Do Racial Attitudes Affect Opinions About The Health Care Overhaul? March 20, 2012
How Health Care Dropped Out Of The Presidential Conversation Jan. 26, 2012