Accessibility links
A Nation Stands Together For A Fallen Soccer Player Last weekend, English soccer fans were looking forward to a sporting feast. They ended up taking part in a nationwide communal vigil, focused on an African-born player's fight for life. 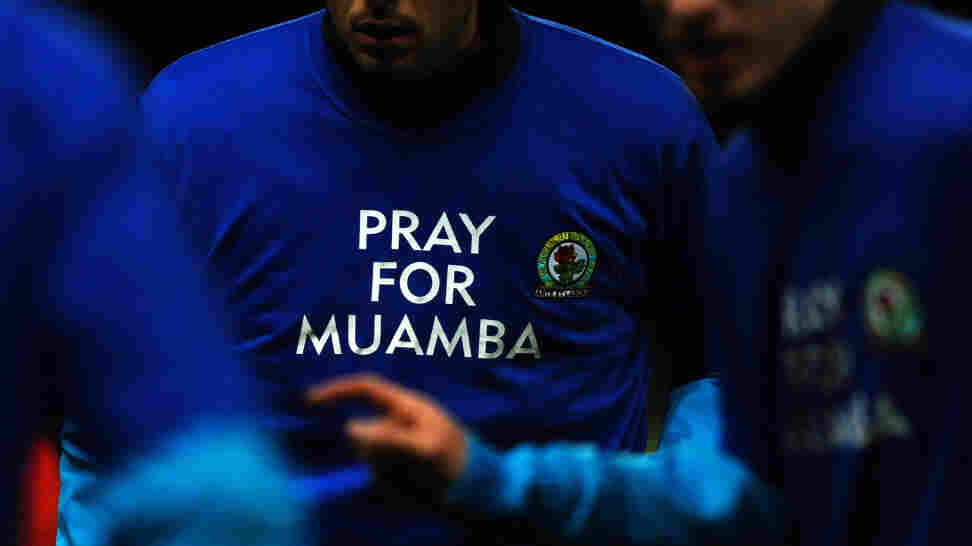 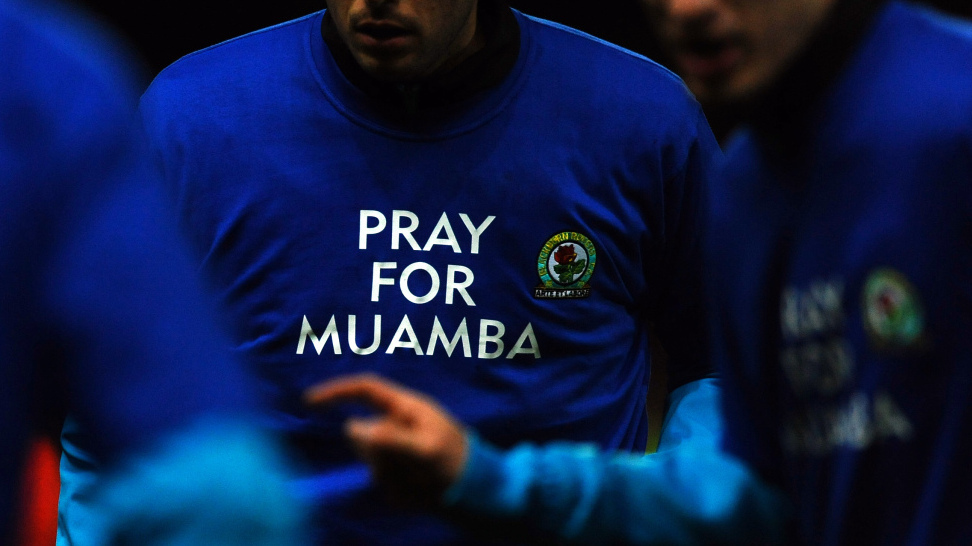 Last weekend, English soccer fans were looking forward to a sporting feast. They ended up taking part in a nationwide communal vigil, focused on an African player's fight for life.

Something extraordinary is happening here.

It started in a sports stadium in London on Saturday. A big crowd had gathered there to watch two English teams, Tottenham and Bolton, do battle in the quarterfinals of the FA Cup.

The FA Cup goes back more than a hundred years: It's England's favorite domestic soccer tournament — or football as they call it here. As the game began, the crowd was happy and excited. Millions were watching live on TV — including me.

Everything was fine until a couple of minutes before half-time. Then, out of the blue, a Bolton player named Fabrice Muamba crumpled to the ground.

The 23-year-old Muamba originates from Congo in central Africa and like every top-class footballer, he's lean and incredibly fit. Yet, he was suffering cardiac arrest.

Medics from both teams raced onto the field. Everyone quickly realized this young man was fighting for his life. The TV cameras respectfully panned away. 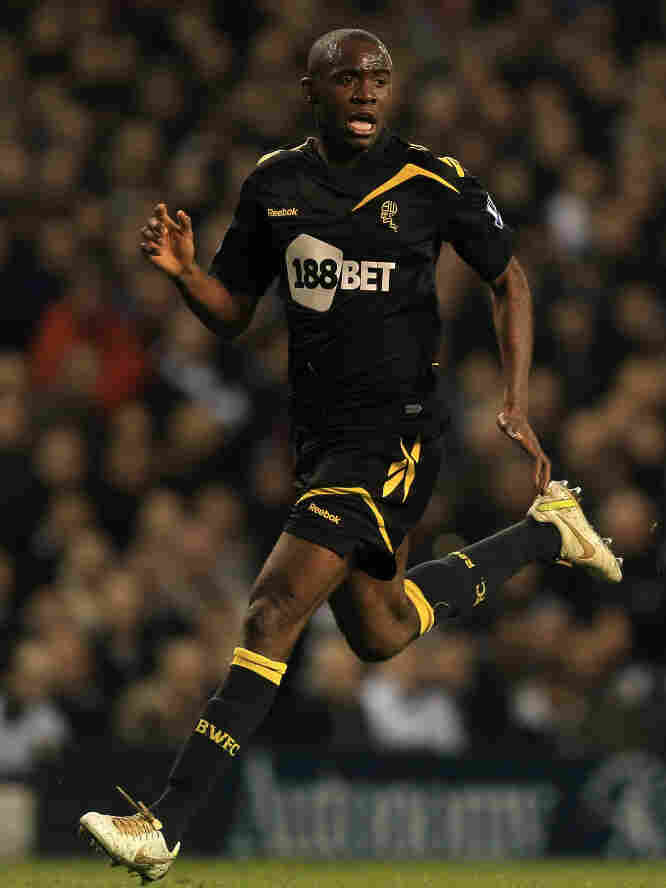 Fabrice Muamba of Bolton Wanderers in action during the FA Cup Sixth Round match on Saturday. Muamba collasped during the game and remains hospitalized. Richard Heathcote/Getty Images hide caption 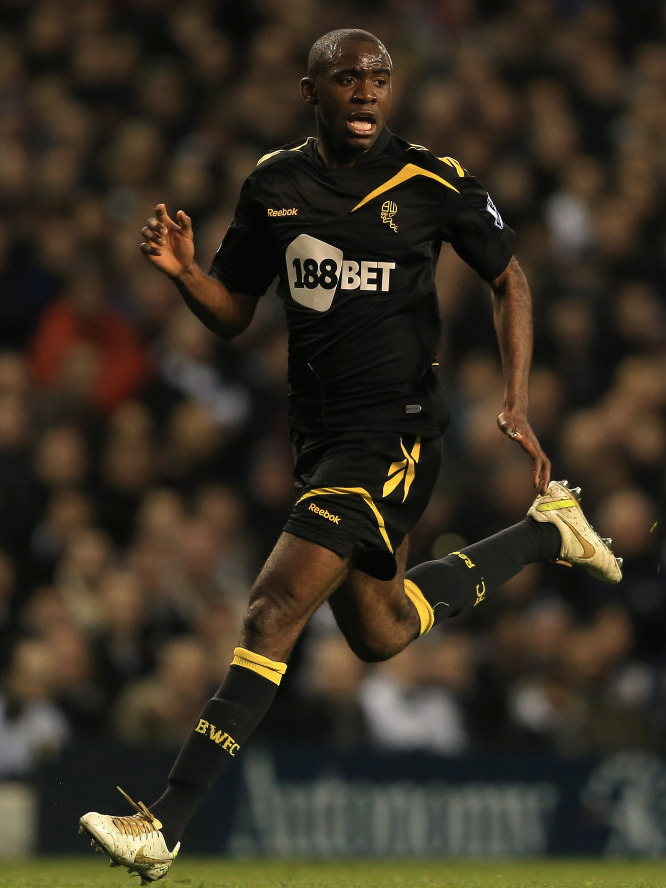 Fabrice Muamba of Bolton Wanderers in action during the FA Cup Sixth Round match on Saturday. Muamba collasped during the game and remains hospitalized.

Football fans in England can be vile. They hurl obscenities at referees who upset them. They snarl and yell at rival fans. They no longer routinely howl racist abuse at black players thanks to a big crackdown, but there are still alarming incidents.

Drunk English football hooligans don't often rampage through the streets, attacking everything and everyone in their path, as they used to a few decades back. Yet they can still be pretty nasty.

On this Saturday afternoon, as Muamba lay there apparently dying, they were very different. The crowd could see from the distress of the players that something horrible was happening out there on the field.

A great hush fell. Then the crowd began chanting. Fans who usually sing abusive songs about each other joined in unison: "Muamba! Muamba! Muamba!"

While the medics tried again and again to fire up his heart, a multitude was collectively willing Muamba to stay alive.

It was two hours before Muamba's heart was beating again, unaided. By then he was in the hospital, the game had been abandoned and the crowd was quietly heading home, some in tears.

Yet the multitude urging Muamba on continued to grow. Twitter was flooded with goodwill tweets from across the world. As dusk fell, rival fans started to turn up outside Bolton's ground to leave messages of support written on their team shirts.

The English are overwhelmingly secular. Sometimes I wonder about this. Many of those tweets simply said, "Pray for Muamba."

In England, football is tribal. That's not always a bad thing. Football crowds these days often observe a minute's silence to honor the passing of one big sporting figure or another.

At such moments, a stadium becomes an arena in which the fans collectively reveal their other side — down-to-earth decency.

Fabrice Muamba is not a superstar. Before Saturday, many of us didn't know he came to England at age 11, fleeing political upheaval in Africa.

Muamba spoke no English back then, yet he learned quickly and soon amassed far more academic qualifications than most other British youngsters, let alone footballers.

Today, a multitude is still tracking the condition of this impressive young man. Latest news is Muamba remains in intensive, but he is showing signs of improvement.

The same could be said of England's football fans.